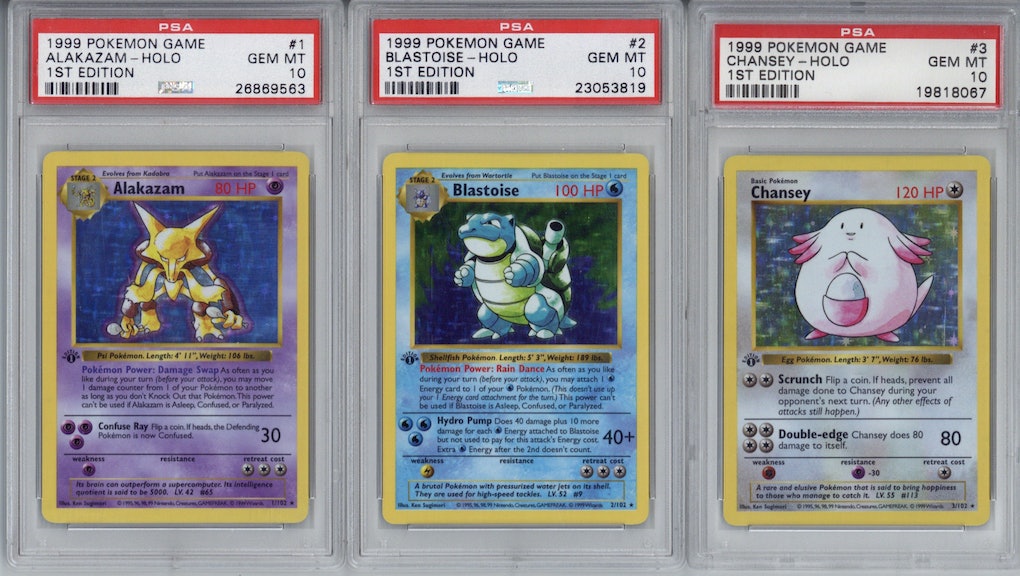 Pokémon card set in mint condition sells for over $100,000

Don't ever let anyone tell you Pokémon cards are dead. Just this past weekend, a Pokémon card set of 103 pristine cards sold for over $100,000 in an auction. According to TMZ Sports, this is the most anyone has ever paid for a set of these cards.

But these aren't the regular set of cards you have in your oft-forgotten Pokémon card binder. This set consisted of "Gem Mint" condition cards that were certified by the Professional Sports Authenticator (PSA), an organization that authenticates the quality of collectible cards. According to the PSA, the "Gem Mint" condition means these Pokémon cards were "virtually perfect" and "free of any staining of any kind."

The card set also included multiple first edition, holographic cards. Not just the coveted Charizard we all clamored for in the '90s, but also a Blastoise, Venusaur, Clefairy, and Gyarados.

The Pokémon Trading Card Game was introduced to the U.S. in 1999, causing a frenzy among children and concern from parents as they watched their kids fall under the spell of card collecting. According to a 1999 article from The New York Times, a Charizard card was worth $75 on the resale market (the article did not specify if this was a regular Charizard card or a holographic edition).

Nowadays, a pristine quality, holographic, first edition Charizard can rake in hundreds or even thousands of dollars. Some on eBay have even reached over $4,000 in bids.

But don't dash for your collection just yet. Dave Amerman, the consignment director of the auction, explained to Kotaku that this isn't the typical price for a set of these cards.

"The key to the sale here isn’t so much the fact of having the entire set together," he said. "You can put together an entire set for maybe $1,000."

The key is actually the certified mint condition of every single card in the set. Once you have that mint condition, these cards can be worth just as much, or more, than an old baseball card collection.

Still, wrote Mashable in 2016, even not-as-perfect Pokémon cards can earn something in an auction if it's the right edition. Even a full set in a binder might be able to earn more than what you'd get if you put it up in a yard sale. So if you have some cards collecting dust somewhere, you might want to consider pulling them out and doing a price check online. They could be worth more than you think.

Unless your parent threw them out long ago. In which case, don't look it up. The pain will only keep hurting.

More like this
Leaked calls reveal the conservative "master plan" to tank climate action
By AJ Dellinger
"Brood X," a plague-level cicada infestation, is coming for us this spring
By Rafi Schwartz
Elon Musk's Neuralink made a device that lets a monkey play Pong with his thoughts
By AJ Dellinger
Stay up to date