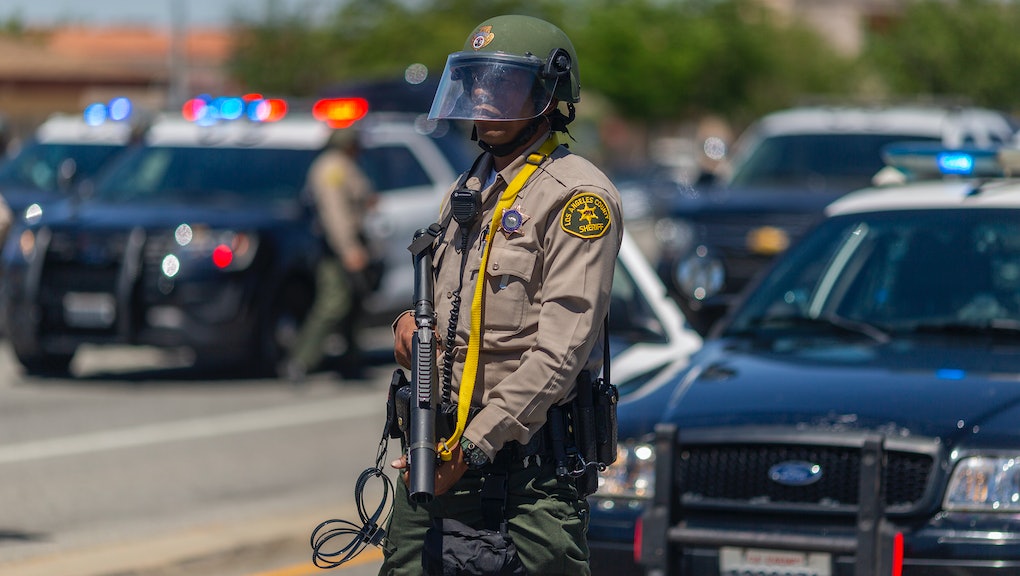 In the wake of the police killings of George Floyd, Breonna Taylor, and Rayshard Brooks, protesters around the country are demanding that cities defund police departments. In places like Minneapolis and Los Angeles, legislators have heeded this call, but in other cities, police budgets have actually increased. A new analysis by The Guardian illustrates how police unions have lobbied elected officials for legal protections and budget increases for years, including during this time of national reckoning with the system of policing.

Police unions are uniquely powerful, as Rafi Schwartz explained for Mic, which makes them a daunting hurdle on the path to reform. They are able to lobby mayors, city council members, county commissioners, and members of police oversight boards to define their own terms of employment and standards of police practice. "In effect," Schwartz wrote, "what this means is that beyond simply negotiating basic employment protections and standards, as is the case for most other unions, police unions have successfully expanded their contracts to include a host of stipulations that complicate, and ultimately stymie, efforts at accountability for individual officers, and reform for a department as a whole."

All it costs the unions for this little perk is millions of dollars.

As The Guardian found in their analysis, the sizable "donations" from unions to those who propose legislation and dictate city budgets leads to protective rules and regulations for officers and increased department budgets. For instance, police unions have successfully lobbied for investigative and legislative guardrails that prevent officers from being subjected to misconduct claims submitted too late after an incident and allow officers to receive "information that civilians do not get prior to being interrogated."

In Los Angeles, the second largest city in the country with a police force of nearly 10,000 officers, The Guardian found that unions have spent nearly $65 million to influence political officials over the past decades. Nearly a third of that money came from the Los Angeles Police Protective League alone, which spent $21.6 million.

Specifically, The Guardian found, Los Angeles police unions gave hundreds of thousands of dollars to specific individuals who had significant power to determine the rules binding the city's law enforcement. For example, the chair of the committee on police reform got $751,000, and the public safety committee chair received $111,000 from union donations. Both individuals were instrumental in advancing legislation that made holding police accountable more difficult. The Los Angeles budget department chair was the recipient of a $25,000 donation around the time that he helped steward a 7% police budget increase, per The Guardian.

While police unions work hard to influence the local politicians who mainly oversee them, state-level unions additionally focus on policy. In California, the Peace Officers Research Association has spent $34 million in "recent decades" to lobby elected leaders and on ballot issues, The Guardian said, while in 2016, unions were responsible for a blocking a ban on the death penalty and in fact pushed through their own measure that hastened executions.

In general, police unions use their power and money to lobby for reforms that appease calls for change without addressing what many activists say are the underlying, fundamental issues with policing. Consider how police unions got on board with the use of body cameras, — a major reform proposal as the Black Lives Matter movement grew to prominence in 2014 — yet evidence shows that body camera use doesn't actually reduce crime. Officers either turn them off, or let the cameras roll while they kill people. And even when the killings are filmed, very few officers have faced in disciplinary action for killing Black and brown people.

It's not just local and state leaders who are influenced by police union money, either. The National Fraternal Order of Police has spent hundreds of thousands of dollars every year in the past two decades lobbying members of Congress on police-friendly and police protective legislation, according to OpenSecrets. Another lobbying tracker, Maplight, found that unions have influenced campaigns in recent years to the tune of $47.3 million.

With the current national scrutiny on policing, it remains to be seen what the result of President Trump's executive order on policing will be, let alone the fate of the dueling legislation on Capitol Hill. Even if most Americans are in favor of some police reforms, if past is prologue, it looks as if police unions may be powerful enough to escape this moment.