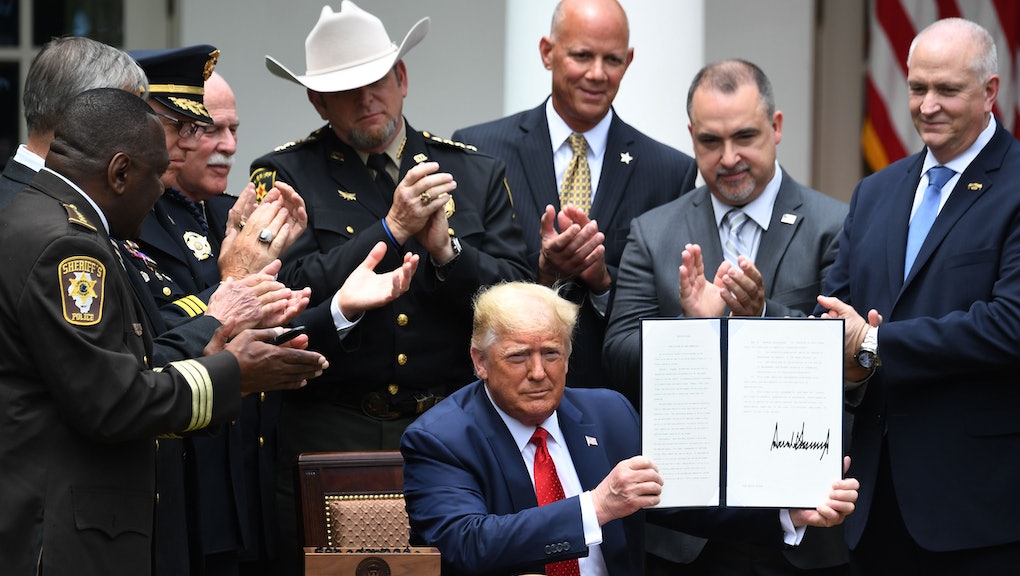 Three weeks after the murder of George Floyd that sparked nationwide protests against police brutality, President Trump signed an executive order aiming to curb police violence through a number of reforms. The executive order comes one week after House Democrats introduced their own police reform legislation, and Trump said during his remarks that the goal of the order is to spur further action on Capitol Hill.

The order calls for Justice Department action to certify organizations that will then accredit police departments in use-of-force training. As part of that DOJ certification process, the use of chokeholds will be banned, "unless an officer's life is at risk," Trump said. The president further called for de-escalation training and said that departments would be encouraged to share information on officers with "credible" accusations of abuse so that they do not "simply move from one police department to the next" — a common practice for officer with prior behavioral issues on record.

The executive order follows national calls for increased use of social workers, referred to as "co-responders," to answer non-emergency 911 calls instead of police officers. Trump said that the White House will direct federal funding for departments in "dealing with" homeless individuals as well as those struggling with mental illness and substance abuse. It's unclear, however, how the president or executive branch plan to enforce many of the department-level rules he's proposed.

Though presidential action on the issue of police use of force may seem significant, especially given Trump's allegiance to law enforcement and police unions, protesters and progressive voters of late have called for defunding the police entirely, which is hardly what Trump has done. The now-national defunding movement calls to pull money out of policing budgets and fund community programs, social services, and education instead. The executive order was careful not to alarm or offend police officers and members of other branches of law enforcement, and in fact, Trump continuously praised "talented officers."

The president said he believes that police reforms, rather than defunding, are critical to reducing police violence, at one point claiming that "many believe that proper training might have prevented the deaths of Antwon Rose and Botham Jean." Rose was a Black 17-year-old shot and killed by a police officer in 2018 in Pittsburgh, Pennsylvania, as he was running away from his car. Jean was a 26-year-old Black man who was murdered in his own home in Dallas, Texas, by an off-duty police officer who had mistakenly entered his apartment thinking it was hers.

Experts doubt that further instruction would substantially reduce police violence; consider the fact that proper training for a Pittsburgh police officer, like the one who killed Rose, lasts less than six months. In fact, it's standard practice for police departments across the country to offer just a few weeks or months of training before sending officers into the field with lethal weaponry and the law ostensibly on their side.

"We will have reform without undermining our many great and extremely talented law enforcement officers," Trump said to the Rose Garden audience, later explicitly noting that he is not in favor of defunding the police. "They understand that when you remove the police, you hurt those who have the least," he said. Trump's executive order largely offers incremental reforms that mirror standards already in place that are intended to curb police violence.

Trump relied on the oft-used metaphor of police killings as resulting from a "few bad apples," contradicting what activists believe to be a racist system of policing. "Nobody is more opposed to the small number of bad police officers — and you have them, they are very tiny, I use the word tiny, it's a very small percentage," Trump said, "but nobody wants to get rid of them more than the overwhelming number of really good and great police officers."

Trump said he believes that a "small" number of "bad police officers" are responsible for the killing of Black and brown people, but did not offer any specific insight as to what repercussions should be levied against officers who kill people. He also suggested that increased interactions between police and communities could be a solution to police violence — a notion echoed by presumptive Democratic presidential nominee Joe Biden — though some experts argue that Black communities are already overpoliced and thus criminalized in ways that majority-white and often wealthier neighborhoods aren't.

Meanwhile, activists have put forth ample evidence of what other effective solutions to police force, aside from giving departments more resources to enact vague reform, including hiring fewer police officers, decreasing the militarization of police departments, pulling officers out of schools, and sending social workers without police officers to mental health emergency calls. Reexamining the legal defense of "qualified immunity," which often protects officers from being sued for what they've done in the field, has also gained traction in recent weeks.

Civil rights attorney David Henderson told CNN that the executive order was a "slap in the face" and said that addressing qualified immunity would urgently tackle the issue of police force more effectively than the reforms Trump offered.

Since Trump was sworn into office, he has positioned himself as an ally to police. In February 2017, he signed three executive orders that would "recognize that the most important crime-fighting measure is to stand behind the officers who are on the front lines." In 2019, the president signed an executive order on the Commission on Law Enforcement and the Administration of Justice, which aimed to "prevent crime from occurring, ensure that those who perpetrate crime face justice, and assist victims in overcoming the effects of crime on their lives."