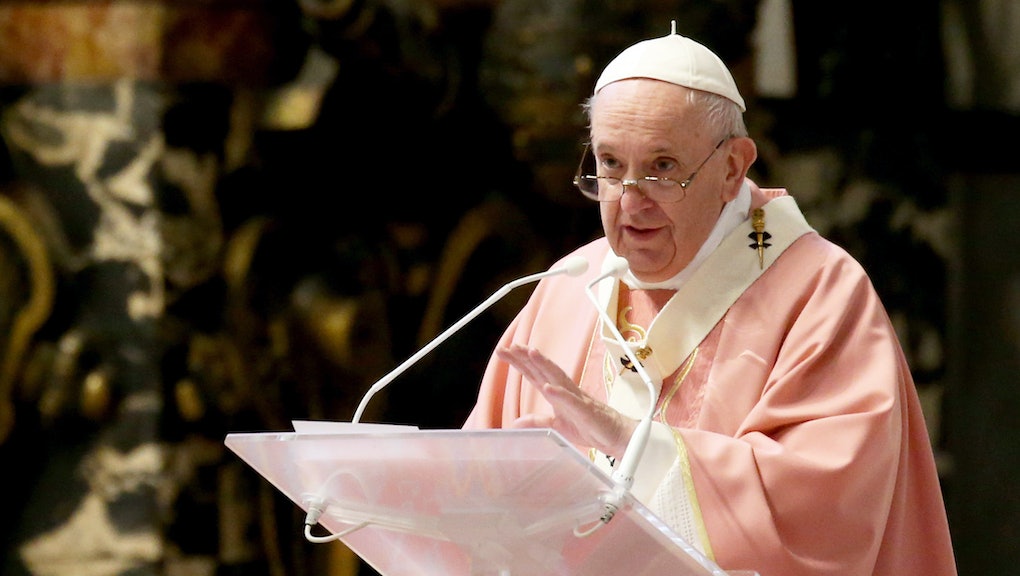 Pope Francis has a, shall we say, "complicated" legacy within the Catholic Church. He has been rightfully lauded for pushing messages of environmentalism and social justice; he accepts evolution; he loves pizza; he promised he'd baptize ET. They're all stances that, combined, have earned him the moniker of "cool Pope."

He is, on the other hand, the head of a millennia-old religious institution, and as such does things like compare women's health care to Nazi eugenics, and the transgender community to "a moment of annihilation of man as image of God." And while he has signaled his support for a civil union law, he's also insisted that "the family [as] man and woman in the image of God is the only one."

It is in this context of "perhaps not as cool as initially advertised" that the Vatican has issued its latest disappointingly anti-LGBTQ+ ruling. The decree, issued by the church's Congregation for the Doctrine of the Faith and approved by Francis himself, emphasizes homosexuality as a "choice" and as such, reiterates that same-sex unions cannot and will not be blessed by the Holy See.

The proclamation, issued in response to questions submitted by members of the church, goes on to state:

It is not licit to impart a blessing on relationships, or partnerships, even stable, that involve sexual activity outside of marriage (i.e., outside the indissoluble union of a man and a woman open in itself to the transmission of life), as is the case of the unions between persons of the same sex. The presence in such relationships of positive elements, which are in themselves to be valued and appreciated, cannot justify these relationships and render them legitimate objects of an ecclesial blessing, since the positive elements exist within the context of a union not ordered to the Creator's plan.

Or, as the Vatican explains later in the statement: "The Christian community and its pastors are called to welcome with respect and sensitivity persons with homosexual inclinations, and will know how to find the most appropriate ways, consistent with church teaching, to proclaim to them the Gospel in its fullness," which is essentially a fancy way of saying, "Hey, be gay, just don't be gay-gay."

Not that this is a particularly groundbreaking stance for the church, or Francis to take. But it's a striking reminder of just how much further some of the most powerful institutions on Earth still have to go before the people within LGBTQ+ community are fully accepted: not just in part, but in every facet of their lives.