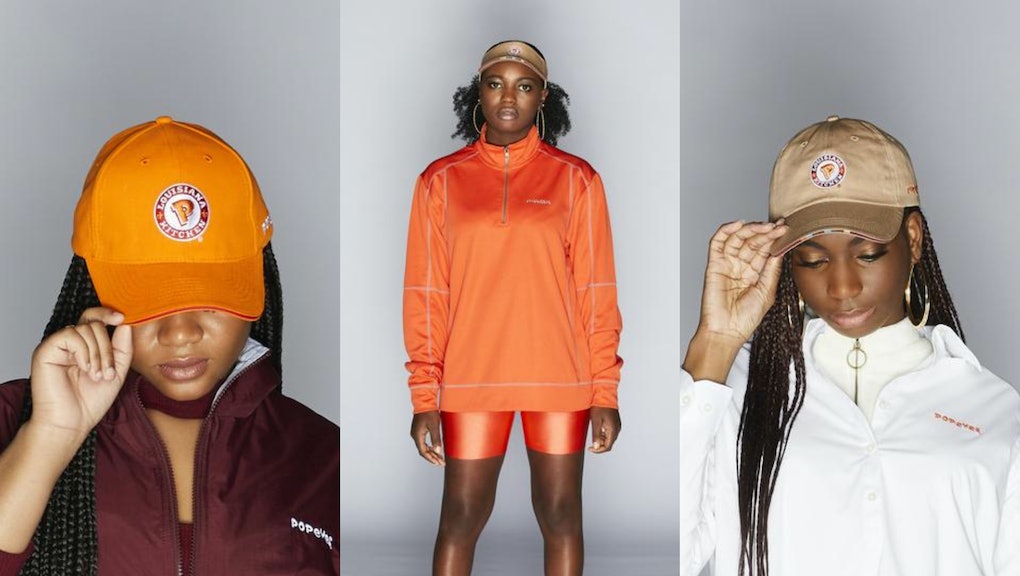 The Popeyes Spicy Chicken Sandwich was somewhat of a revelation — it disrupted the world of fast food, ignited conversations, and made Chick Fil’ A sweat a little bit. But Popeyes Louisiana Kitchen isn’t just here to disrupt the fast-food industry. They have now ventured into the fast(ish) fashion industry.

Taking some obvious cues from Beyoncé’s Ivy Park x Adidas launch, the Popeyes uniform is now purchasable on ThatLookFromPopeyes.com and billed as an alternative for people who couldn’t snag the highly coveted launch. And while the poses and color scheme are remarkably similar, the Popeyes line is significantly less expensive the Queen Bey’s athleisure line. Another major difference? There’s only tops and accessories available for sale at Popeyes, so if you’re looking for bike shorts and sweatpants, you are gonna have to hop onto the Ivy Park waitlist.

The Popeyes t-shirt and crew sweatshirt are already sold out, but the jackets, half-zip tunics, and hats are all still available for purchase. Service industry uniforms turned fashion isn’t a new practice in the fashion industry, but at least this time, actual workers are being represented by the gambit.

According to the Washington Post, all of the models used for their fashion shoot were actual employees. The line is a limited edition release, and based on an email announcing the launch, it isn’t intended to be around for a long time. “Based on the hype surrounding the brand in recent months,” a Popeyes representative told the Washington Post, “supply likely won’t last long.” All of the proceeds from the clothing line will be sent to the Popeyes Foundation, which has a goal to “strengthen our communities with food and support in times of need.”

After the Ivy Park collection was first released, Twitter users noted that the color scheme of the line was remarkably similar to the packaging for Popeyes. It can’t be forgotten, of course, that Beyoncé is a huge fan of the company. Though something tells me that Beyoncé did not create her first release of Ivy Park as the sole owner as the brand in homage to Popeyes, no matter how excellent their food is.

As Kim Kardashian unboxes her Ivy Park collection on her Instagram stories, you can save some money and rep the best chicken in the fast-food game with a $25 dollar Popeyes Louisiana Kitchen button down.