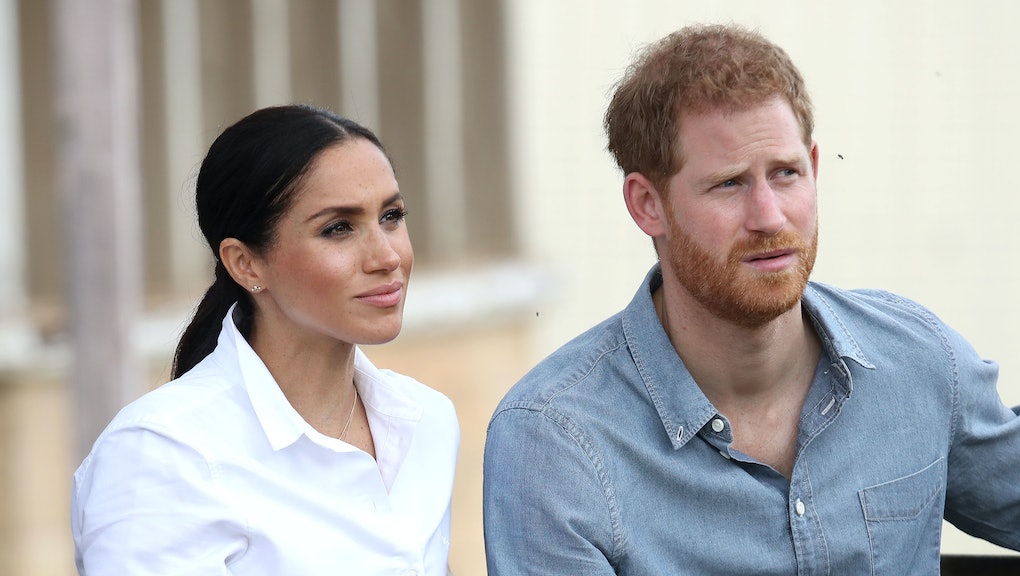 Prince Harry and Meghan Markle are proving the monarchy is irrelevant

Prince Harry and Meghan Markle seem like they’re doing really well in sunny southern California. They’ve kept a rather low profile since stepping away from their royal duties in January 2020, other than announcing they’re developing content for Netflix and expecting their second child later this year. It’s now been more than 12 months since the couple distanced themselves from Buckingham Palace, and they’re pulling back the curtain on the toxic aspects of royal life.

Days before Oprah’s prime-time special with Meghan and Harry is set to air on March 7, the Duke of Sussex joined Late Late Show host James Corden for a double-decker bus ride around Los Angeles. They covered lots of ground during their chat — from his thoughts on The Crown (better than the tabloids, he says) to what it’s like Zooming with the Queen (she knows how to do it, though Prince Philip insists on slamming down the laptop instead of simply exiting the call).

But one of the most striking moments of the interview was when Corden questioned Harry on his decision to walk away from his birthright: "It was never walking away. It was stepping back rather than stepping down. It was a really difficult environment,” Harry said. “As I think a lot of people saw, we all know what the British press can be like, and it was destroying my mental health. This is toxic. I did what any husband, any father would do. I needed to get my family out of here."

Interestingly, Prince Harry noted that he prefers the depictions of his family on The Crown over what’s written about in British tabloids. “I am way more comfortable with The Crown than I am seeing stories written about my family or my wife or myself,” he said. “[The Netflix series] is obviously fiction, take it how you will. But [royal gossip] is being reported on as fact because you’re supposedly news. I have a real issue with that.” If The Crown ever tackles modern times, Harry said he’d want Damian Lewis to play him.

Despite all the handwringing about The Crown from Buckingham Palace, which asked Netflix to add a content warning underscoring that it’s fictional (the streamer refused), the Duke of Sussex said the show gets a lot of things right. “Of course, it’s not strictly accurate. It gives you a rough idea about that lifestyle — the pressures of putting duty and service above family and everything else, and what can come from that,” Harry noted.

Prince Harry and Meghan Markle have spent the last year-and-change carving out new lives for themselves in Los Angeles now that they’re liberated from royal duties. In many ways, they’re emulating the Obamas, who have similarly divested from official public duties in favor of philanthropy and producing content for streamers like Netflix and Spotify.

Just last week, Buckingham Palace confirmed that the couple was permanently stepping down as working royals. But Harry told Corden that a huge part of their lives in America will be devoted to philanthropy and public service, even if it’s not officially sanctioned by the Queen. He described it as "a slightly different version, but a continuation, of what we were doing back in the UK anyway." Adding: "My life is always going to be about public service, and Meghan signed up to that, and the two of us enjoy doing that."

The public has a much more nuanced understanding of the less rosy side to being royal these days, thanks to programs like The Crown (which most recently offered fresh perspective on Princess Diana’s fraught experience) and witnessing how brutally Markle was bullied by the British press. It’s a bit of a chicken-and-egg conundrum — Harry wouldn’t be famous if he weren’t born royal — but watching the Duke and Duchess of Sussex walk away from that life underscores how little anyone needs the monarchy in the 21st century.

I hate to imagine 7-year-old Prince George being pressured into a loveless marriage someday, just in the name of producing an heir to the throne. Just an idea, but maybe it’s finally time to retire the monarchy altogether. At least it would end on a high note: with a woman holding the title of longest-reigning monarch in British history.