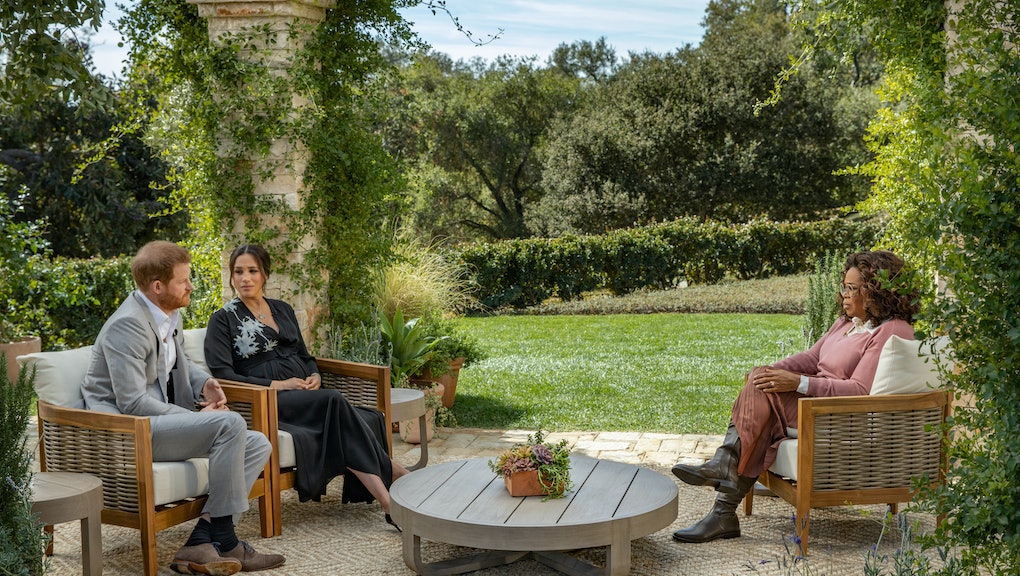 The ratings are in for Oprah Winfrey’s bombshell interview with Prince Harry and Meghan, Duke and Duchess of Sussex, and it was a huge televised event, drawing twice the audience of this year's Golden Globes (if more modest than the Super Bowl) and a larger number than the average weekly viewership for all four major networks last week. Viewers were primed for an explosive broadcast; CBS extended the primetime special to two hours, because there was just too much juicy content to cram into 90 minutes. Even so, Winfrey went on CBS News on Monday morning to premiere even more footage of the Sussexes taking the monarchy to task.

The many revelations Meghan and Harry disclosed in the interview are damning for the Crown. Even Winfrey was visibly shocked when the couple told her someone within “the firm” had fretted about “how dark” their first child, Archie, would look when he was born. In another heartbreaking moment, Meghan disclosed that the bullying and isolation she endured as a royal made her suicidal.

Both she and Harry said they begged Buckingham Palace for help. Meghan said she sought inpatient mental health treatment and was denied care because of the optics. When British tabloids mounted a character assassination against her, she said the monarchy did nothing to refute the made-up stories. Ultimately, the Sussexes sought to make it clear they felt they had no other option for their literal survival but to step away from royal life.

Those are the SparkNotes, so to speak. Here are the other major takeaways:

Meghan was plagued by racism from the beginning

The tabloids might’ve dubbed Kate Middleton “Waity Katie” for supposedly hanging around until Prince William proposed, but the attacks on Meghan were far crueler and loaded with bigotry. “Rude and racist are not the same,” she told Winfrey in one of the clips that debuted on CBS This Morning.

The couple said racism also permeated their relationship with the royal family. When Meghan was pregnant with Archie, “the firm” broke with tradition and decided not to grant the queen’s great-grandson a royal title or provide him with security protection. It was around this time that someone raised concerns to Harry about, as he phrased it, “what will the kids look like?”

Royal life was so torturous that Meghan became suicidal

The daily onslaught of tabloid vitriol was incredibly taxing. Meghan also told Winfrey she felt horribly isolated as a royal. She talked about yearning to see friends and otherwise venture out in public, on her own terms, and being told no by Buckingham Palace, because she was “oversaturated” in the press and ought to lie low. “Well, I haven’t left the house in months,” Meghan recalled protesting. (Her account rings true to anyone who saw The Crown's portrayal of Princess Diana's cloistered existence.) She said Harry was often her sole source of support.

A year after the couple’s fairy tale wedding, things had gotten so dire that Meghan contemplated suicide. She mustered the strength to confide she was struggling: “I was ashamed to have to admit it to Harry. I knew that if I didn’t say it, I would do it. I just didn’t want to be alive anymore,” Meghan said. “That was a very clear and real and frightening constant thought. And I remember — I remember how he just cradled me.”

Her transparency was powerful, giving voice to others who may be struggling. Meghan talked about being frightened by thoughts “in the middle of the night that are very clear.” She said she recognized she needed help: “This isn’t some abstract idea. This is methodical. And this is not who I am.” But when she went to a senior member of the royal family about the possibility of inpatient care, she was told it “wouldn’t be good for the institution.” The monarchy’s response to Meghan’s suffering was essentially telling her to “keep a stiff upper lip” and carry on like a good Brit.

Harry and Meghan are surviving on money from Princess Diana

Even before the couple distanced themselves from Buckingham Palace, there were signs the monarchy wasn't keen on supporting them financially. Harry said the royal family suggested that Meghan keep acting, “because there wasn’t enough money to pay for her,” he noted. “There was some real obvious signs before we even got married that this was going to be really hard.”

When the Sussexes decided to move to L.A., "the firm" cut them off completely. Harry and Meghan said they pleaded with the royals to pay for security for them and Archie, as they were getting death threats and feared social media made them especially vulnerable, but were denied protection. The couple's friend, entertainment mogul Tyler Perry, offered them his own security detail.

Going forward, the couple will make a living producing content for Netflix. But in the meantime, Harry told Winfrey, “I’ve got what my mum left me, and without that, we would not have been able to do this," meaning relocate to the United States.

The tell-all interview was perhaps most damaging to Prince Charles, who's next in line for the throne. Harry told Winfrey that at one point his father wasn't taking his calls and said he was asked to put things in writing when the couple was contemplating stepping away from their roles. “I feel really let down, because he’s been through something similar,” Harry said, talking about the media's hounding of Princess Diana. He noted they are speaking again but added, “there’s a lot to work through there.”

On the flip side, the couple underscored they were on good terms with the queen, and Harry denied "blindsiding" her with the news they were leaving. Prince William hardly came up during the interview, but Harry told Winfrey their “relationship is space, at the moment.” Still, he said he believes his father and brother are "trapped" by the institution. Harry added he was similarly imprisoned but that Meghan "saved" him.