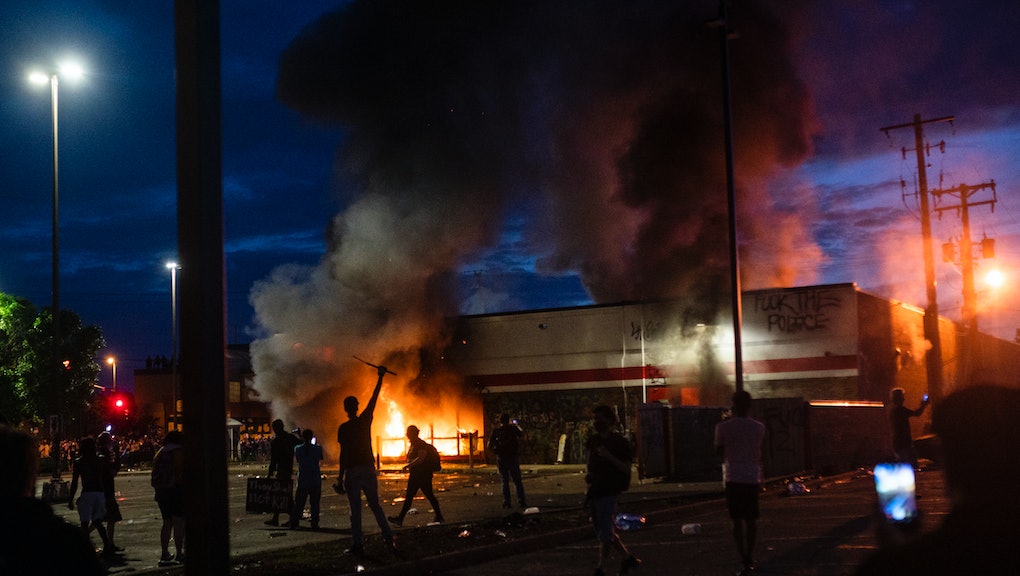 Protests over George Floyd's death are escalating in Minneapolis and beyond

Community anger at the police killing of George Floyd, an unarmed Black man, in Minneapolis earlier this week continued to explode late into the night Wednesday, as police again targeted protesters with chemical irritants and non-lethal rounds. Some demonstrators expressed their anger and pain by damaging nearby storefronts and buildings.

When the sun rose on South Minneapolis on Thursday, multiple buildings had been burned and stores looted, as violence from the previous evening spilled down Lake Street, away from the immediate area of the 3rd precinct police station that had been the focal point for protests Tuesday night.

According to Minneapolis Police, at least one person was killed Wednesday evening, with one person in custody from the incident. Police believe it involved a suspected attempted break-in at a nearby pawn shop.

Speaking Thursday morning in response to the escalating protests, Minneapolis City Council Vice President Andrea Jenkins cited Floyd's death at the hands of Minneapolis police officer Derek Chauvin, who knelt on Floyd's neck for several minutes. Jenkins said that the Black community in the city has felt like a knee has been on its neck, too — "a knee that says black lives don’t matter," she explained.

Minneapolis Mayor Jacob Frey (D) attempted to thread the needle between pleading for calm in his city while validating the righteous anger being expressed over Floyd's death. "I believe in Minneapolis. I love Minneapolis," Frey said. "In believing in our city, we must believe we can be better than we have been. We must restore the peace so we can do this hard work together."

By Thursday afternoon, however, protests over Floyd's death had expanded beyond Minneapolis and into neighboring St. Paul, where protesters chanting "no justice, no peace" amassed outside a Target in a standoff with local police. Police also reported multiple instances of vandalism and looting in the area.

The police killing of Floyd has become a major flashpoint in Minnesota and beyond, with protests shutting down traffic along Los Angeles' 101 Freeway on Wednesday and other demonstrations planned in cities across the country.

More like this
All 4 officers involved in George Floyd's death will face federal charges
By AJ Dellinger
Ohio police have "run amok" in their dealings with protesters, a federal judge admitted
By Vanessa Taylor
Buckle up: The investigation into the Jan. 6 insurrection is just getting started
By Rafi Schwartz
Stay up to date