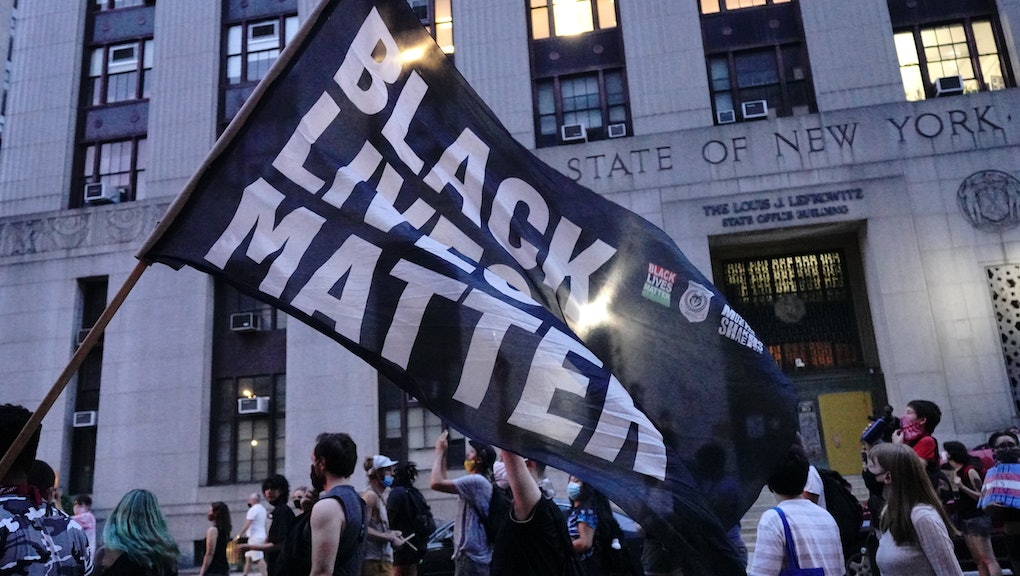 On Sunday afternoon in Kenosha, Wisconsin, police attempted to kill a 29-year-old Black man by shooting him point-blank in the back seven times. Police targeted Jacob Blake, a father who was reportedly attempting to break up a fight between two people. Officers attempted to Taser Blake as he walked away from them and back to his car, where his children were waiting. As Blake turned to enter his car, a Kenosha officer grabbed Blake's shirt and fired his gun.

The incident was captured on bystander video, which circulated widely on social media Sunday evening. Blake survived the shooting and underwent surgery at a local hospital, his family told local NBC affiliate TMJ4, where he is now in serious condition. The Wisconsin Department of Justice will investigate the shooting.

The police were not wearing body cameras at the time they shot Blake, but the bystander video shows clearly what happened. The Kenosha Police Department offered an incomplete account of Sunday night's attack, referring to a shooting that "occurred" without mentioning the officers who shot Blake in the back.

The police shooting of Blake is the most recent in a summer of sustained protests and uprisings against the systems of white supremacy, policing, and surveillance. While police killings in no way began with the killing of George Floyd in Minneapolis on May 25, Floyd's death did galvanize a nationwide movement against police and systemic violence against Black people.

But even as video evidence of violence circulates on Twitter again and again, the violence persists. It begs the question: Who are these videos for? As Bernice King, the daughter of the late Martin Luther King Jr., said on Twitter: "We shouldn’t have to see one more video of a Black human being brutalized and/or gunned down by police ... Anybody who doesn’t believe we are beyond a state of emergency is choosing to lack empathy and awareness."

Journalist Bianca Clendenin made a similar point in an op-ed for Now This. "You might ask yourself: Does sharing these videos help non-Black people understand the weight of these images?" she wrote. "So you saw these videos, and now what?"

Sherrilyn Ifill, the president of the NAACP Legal Defense Fund, tweeted that the shooting of Blake shows how when police shoot Black people, it's often in place of using other means to detain them. "Our lives have so little value," she wrote, "that [officers] are using fatal gunshots as a shortcut to talking, negotiation, disabling vehicles."

Blake's family hired famed civil rights lawyer Ben Crump, who has represented a number of families who have lost loved ones to police killings. In a statement, Crump said, "We will seek justice for Jacob Blake and for his family as we demand answers from the Kenosha Police Department. How many more of these tragic 'while Black' tragedies will it take until the racial profiling and undervaluing of Black lives by the police finally stops?"

Crump is also representing the family of Trayford Pellerin, a 31-year-old Black man shot and killed by police Friday evening in Lafayette, Louisiana. Per Louisiana State Police, officers were responding to a call about a person "armed with a knife," and when they arrived at the scene found Pellerin with a knife in a convenience store parking lot. The statement says an attempt to use a Taser on Pellerin was "ineffective" and that offers shot the fleeing man as he tried to enter the store of a Shell gas station. An 18-year-old witness, Rickasha Montgomery, filmed video of that shooting which has also circulated online, the Lafayette-based Daily Advertiser reported.

In response to the police killings of Floyd, Breonna Taylor, Elijah McClain, and many others, protesters and activists have demanded a number of changes to the way that America polices its communities. But while protester demands have been sweeping — like a call to defund police nationwide — lawmakers' responses have been more piecemeal, including a bill to ban no-knock warrants in Louisville, Kentucky, after Taylor was shot in her home, and a bill that passed the House in June that would reform local policing, including a provision to ban chokeholds, which activists have noted hasn't stopped police from using them in the past.

More like this
Ohio police have "run amok" in their dealings with protesters, a federal judge admitted
By Vanessa Taylor
All 4 officers involved in George Floyd's death will face federal charges
By AJ Dellinger
In his first address to Congress, Biden took on the country's vices: guns and police brutality
By Rafi Schwartz
Stay up to date