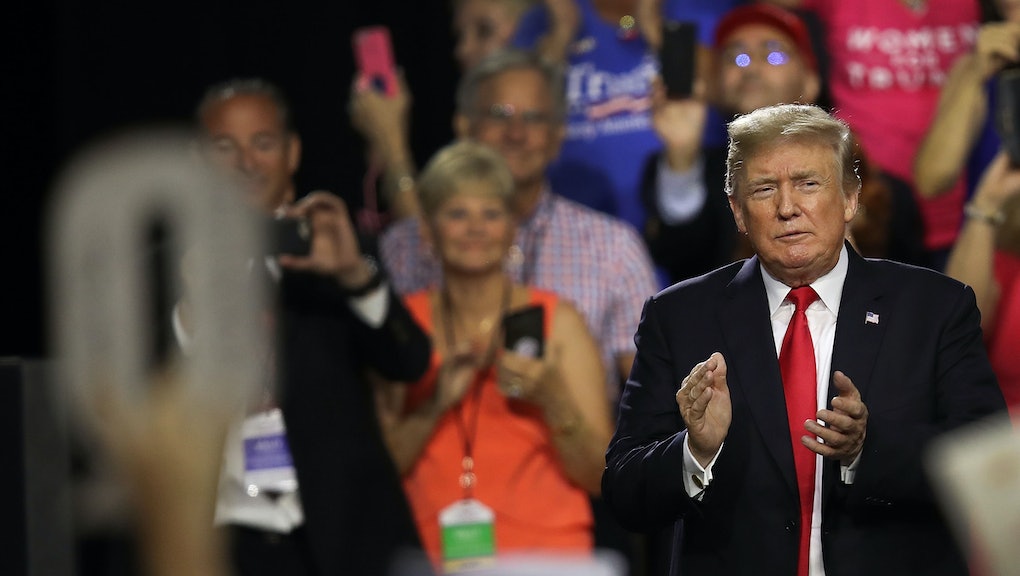 Followers of QAnon, a massive conspiracy theory that claims the government and media are controlled by Satan-worshipping pedophiles who run a global child sex trafficking ring, typically have no problem buying into ideas that fly in the face of common sense. But some members of the group seem to have finally reached their breaking point in the most unexpected way.

Earlier this month, disgraced former President Donald Trump announced that he would join disgraced former Fox News host Bill O'Reilly for a speaking tour — an innocuous-enough sounding event held by a pair of grifters who have enough crossover appeal that they can bleed their audiences of some of their hard-earned money. But the announcement didn't sit well among QAnon's fiercest believers.

You see, according to the QAnon conspiracy, Trump is supposed to be reinstated as president of the United States in August, when audits of the 2020 election will supposedly reveal such widespread fraud that the results will be thrown out and Trump will return to the White House. But Trump's team-up with O'Reilly is scheduled to take place in December — months after Trump is supposed to start his second term as president.

According to a report from Newsweek, this bit of information seems to have been quite deflating to the folks who have been waiting eagerly for August. Citing posts in a Telegram group hosted by prominent Trump supporters, the publication found a number of folks who were dismayed by the news. "OK I GUESS MY QUESTION IS TRUMP COMING BACK?" asked one user going by the name Peace Lilly. "WHY WOULD HE BE DOING A TOUR THRU THE END OF THE YEAR WITH O'REILLY."

This sudden awareness that the dominoes might not be falling the way they have been told to expect hit other users hard, too. "So basically the August thing is a bunch of bull because a reinstated president doesn't go on tour," a user named Angela Baldwin wrote. Others joined in to call the news "depressing" and expressed their hope that the tour was simply some kind of distraction or small setback on Trump's inevitable path back to the presidency. Some even held out hope that it's a misdirection of some sort. ""It's only a few dates close together...it could be done if it works out like it should...could cancel....but yup..kinda a gut punch statement," one Telegram user wrote, according to Newsweek.

"But," the user added, "we are in an information war, so who the hell knows."

The sad reality for QAnon supporters is that they are out in the wilderness at the moment, and are forced to read into every little bit of information. Q, the character who is supposedly a government insider and has been driving the conspiracy's longevity with ambiguous hints about alleged upcoming events, has been silent for months now. Many of the conspiracies that the group had latched onto in order to cope with Trump's 2020 loss have since been discredited, including other theories about Trump's supposed reinstatement. QAnon backers claimed earlier this year that Trump would retake the office of the president on March 4, citing obscure theories of sovereign citizen groups that claim the United States was split into a country and corporation in the 1800s and that Trump is the rightful leader of the government.

It's a whole thing, and the details are confusing. But needless to say it did not come to fruition.

But this hasn't stopped Trump backers and QAnon believers of creating new scenarios in which the ousted president will surely return to office. The August theory hinges largely on a conspiracy-laden audit of votes in Arizona that has thus far produced no meaningful results, and is even getting on the nerves of Republicans. But it's been good enough for Trump to talk himself into the idea that he'll be reinstated come this summer. On right-wing forums, supposed tickets to a planned inauguration have started to make the rounds, showing the event is set for Aug. 15 and will feature musical guests Kid Rock and Ted Nugent.

The sad fact is that when that day in August comes and goes without Trump's reinstatement, the goal posts will likely just shift again — similar to when doomsday prophets claim the world is going to end on a specific date, then push the day back when inevitably, nothing happens. Still, it's a rude awakening to have your reality shattered. Who would have guessed a truly miserable-sounding speaking tour would be the final straw?