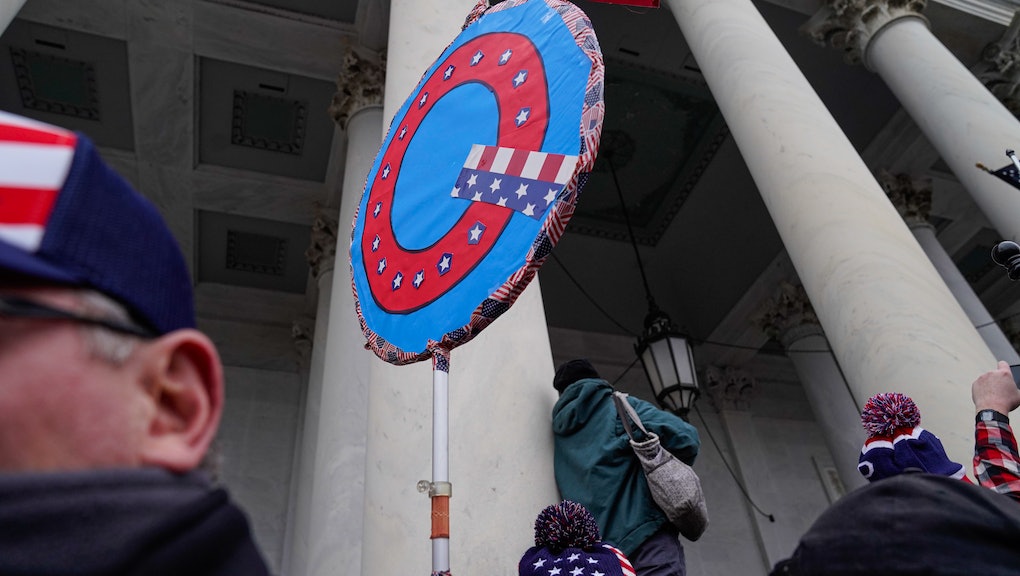 The historic second impeachment trial of former President Donald Trump started Tuesday, and as with all things that are objectively bad, QAnon is pretty sure it’s a good sign. According to a report from Vice, QAnon groups are floating the theory that Trump is allowing the impeachment proceeding to go forward simply to lay the groundwork for other criminal trials against former presidents, which they expect he will launch as soon as he retakes the office on March 4.

Oh, right. It's probably important to know that QAnon is pretty sure that Trump is actually still president.

Here's the deal: Ever since Joe Biden was sworn in as president on Jan. 20 — an event that QAnon followers were absolutely positive would not happen — they have developed a new theory. Now, they believe that Trump will once again take the oath of office and resume the second term of his presidency on March 4.

This latest theory is not a QAnon original, but rather one that borrows from the sovereign citizen movement, a group of people who believe that federal laws and taxes do not apply to them. Sovereign citizens often cite obscure or obtuse readings of old law in order to prove that they cannot be subjected to state or federal law. For example: They argue that when the U.S. created the District of Columbia in 1871, it ceased to be a country and became a corporation, all because the words "United States of America" appeared in the law in all capital letters. According to a very specific reinterpretation of a law dictionary, only the names of corporations can be spelled out with all capital letters.

If that's not out there enough for you, sovereign citizens also believe that President Franklin D. Roosevelt sold the country to investors in 1933 when he ended the gold standard and that he illegally changed the date of the inauguration from March 4 to Jan. 20. In reality, FDR moved the date to shorten the "lame duck" period between when a candidate wins the presidential election and when they are inaugurated. But sovereigns believe the true inauguration occurs on March 4.

That brings us back to QAnon. Adherents of the conspiracy theory have latched onto the sovereigns’ assertion and molded it to their own beliefs. They think Joe Biden was sworn in as the president of the U.S. corporation — the thing that was supposedly created in 1871 — but that Trump will return to office as the president of the actual original government.

“Laying the groundwork for Obummer, Bush, Clinton! Trump's a genius!”

As for the second impeachment trial? It's actually just part of the plan — though how it fits in really depends on who you ask. One QAnon supporter cited by Vice makes the case that Trump will get convicted, but only so that other former presidents can be subject to the same fate.

“Do not be shocked if they impeach Trump. It will have to set the path for other presidents to be impeached,” one Telegram user wrote. Another, building off this theory, suggested the move was “Laying the groundwork for Obummer, Bush, Clinton! Trump's a genius!”

Others think that the impeachment trial is evidence that Trump has still been the acting president this whole time. “I think the real answer is Trump is still POTUS. The military is in control due to Trump's [executive order]. They need to impeach Trump to invalidate his EO and take control back from the military. That's the real reason," one QAnon backer argued.

QAnon's embrace of the sovereign citizen movement theory is troubling, particularly because that group has a long history of anti-Semitism and racism. Sovereign citizens have also been accused of killing law enforcement agents because they believe they are infringing upon their rights. That QAnon backers are adopting the ideals of additional anti-government movements could make the conspiracist backers more dangerous.

Meanwhile, as QAnon finds new theories to cling onto, the group's most famous supposedly rehabilitated supporter, Georgia Rep. Marjorie Taylor Greene, has taken to floating her own conspiracies about the Jan. 6 attack on the Capitol.

In a series of tweets she posted Tuesday, Greene reasons that there is no way that Trump supporters could have been behind the siege at the Capitol, because the mob descended after Republicans had already begun objecting to certifying Biden’s electoral victory. "The attack ruined our objection that we spent weeks preparing for, which devastated our efforts on behalf of Trump and his voters," she tweeted. The conspiracy-minded congresswoman went on to argue, "This impeachment trial a circus for the Democrat media mob to entertain the masses that they have brainwashed and addicted to hate, so they don’t see the [Democratic] policies being rapidly forced into place that are destroying our lives, stealing our freedoms, and putting America last."

Greene was among those who encouraged Trump supporters to take action to stop Biden's election certification. The day before the Capitol riot, she told her supporters, "get ready to fight for America tomorrow," while explicitly stating that "Trump was re-elected” and that the Electoral College vote was "stolen." Her new theory is apparently that anti-government anarchists were the ones who tried to breach the Capitol and kill politicians, not Trump supporters.

Why those people would’ve been in attendance at a Trump rally is hard to say, but surely Greene will come up with an explanation that is just as reasonable as the U.S. secretly being converted to a corporation, or that there exists a satanist, pedophilic cabal of Democratic politicians. You know what they say: You can take the congressperson away from the conspiracy theorists, but you can't take the conspiracy theorist out of the congressperson.

More like this
If "Today Is America" then what the hell is tomorrow?
By Rafi Schwartz
There are QAnon NFTs now, because one grift deserves another
By AJ Dellinger
Oops, the Arizona recount the MAGA crew demanded actually took votes away from Trump
By Rafi Schwartz
Stay up to date