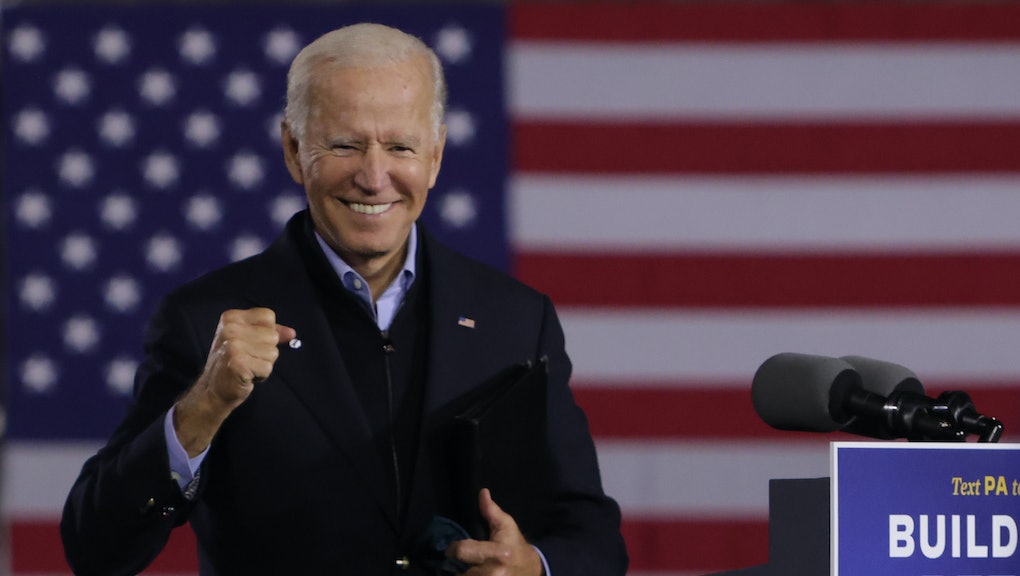 Look, there's still plenty of time between now and Election Day for things to go catastrophically wrong for the Democrats. Having said that however, if I'm Joe Biden looking at the just-released Quinnipiac University polls for Florida, Pennsylvania, and Iowa — three states that each could be considered canaries in the coal mine for the rest of the country — I'm feelin' preeeetty good right now.

"In varying degrees, three critical states in three very different parts of the country come to the same ominous conclusion," Quinnipiac polling analyst Tim Malloy said in a press release prefacing the group's findings. "The president's hopes for re-election are growing dimmer by the day."

Indeed, in question after question in Quinnipiac's poll, Biden enjoys a commanding lead over the president in all three states when it comes to voters' impressions on temperament, the coronavirus pandemic, and racial inequality.

In Florida, likely voters support Biden over Trump 51%-40%. That compares to a Sept. 3 Florida poll showing Biden with 48% support and Trump with 45% support.

Among party affiliation, the biggest change is among independents, who now support Biden by a 20-point margin compared to a 10-point margin a month ago.

In Pennsylvania, likely voters support Biden over Trump 54%-41%. That compares to a Sept. 3 poll when Biden received 52% support to Trump's 44%.

Those numbers look even worse for Trump as you drill down into the individual questions within the three state polls. For instance, voters seemed uniformly turned off by the president's performance in the first debate, with 44%, 45%, and 46% of respondents in Florida, Iowa, and Pensylvannia respectively saying they saw Trump less favorably after the debate. (The number of respondents who said their impression of Trump went up ranged from 7%-9% in each state.) More broadly, more than half of respondents in all three states said they disapproved of Trump's "handling his job as president" overall.

Of course, as I mentioned above, there's a lot that can change between now and Nov. 3. And polling is hardly an infallible science to begin with. Shortly after Quinnipiac released its latest numbers, Guy Cecil, the chairman of the Democratic Super PAC Priorities USA, publicly rejected the polling numbers, chiming in on Twitter "to simply say we are not up 11 in Florida and 13 in Pennsylvania," (Cecil's tweet conspicuously did not mention whether his own polling data showed Biden doing worse, or better, than Quinnipiac's.)

Still, the trend line seems fairly clear: If I'm a member of the Biden campaign, I'm keeping my foot on the gas. And if I were one of the president's advisers, I'd start looking for some way — any way — to change the dynamics of the race. Either that, or I'd start looking for an escape route.

More like this
Americans are feeling something weird and unfamiliar: optimism
By AJ Dellinger
In his first address to Congress, Biden took on the country's vices: guns and police brutality
By Rafi Schwartz
Biden has hit his 100th day in office. So what's next?
By Rafi Schwartz
Stay up to date