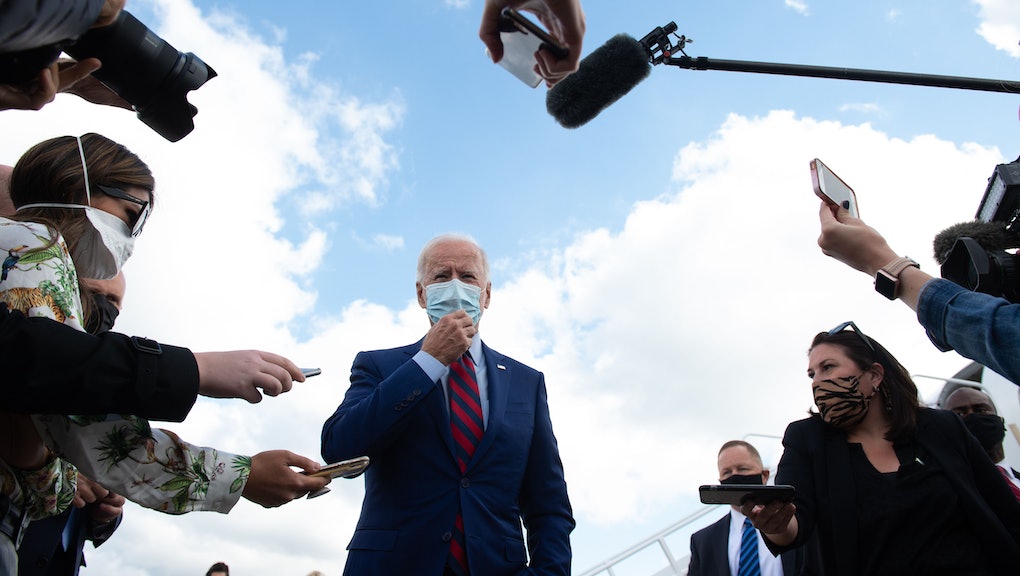 One month out from the general election, Vice President Joe Biden has been campaigning in a few unlikely places. Biden's presence and ad buys in swing states like Florida, Pennsylvania, and Ohio, all of which went for President Trump in 2016, indicate that Democrats are feeling confident about their candidate's chance to flip those states back to blue. You could attribute the last-ditch campaign shift to a number of "October surprises" — the shocking debate performance last week, the government's handling of the coronavirus crisis, or the nomination of Judge Amy Coney Barrett to the Supreme Court. But one thing appears certain: Democrats are liking their odds.

It's common political knowledge that presidential races are fought, run, and lost in just a handful of swing states. Yet it's also common knowledge that with finite resources — money, people power, and time — some states are predetermined as unwinnable, which is why you won't see Democratic presidential hopefuls spending much time in Kansas or encounter many Republicans in California. But a select few states hold outsize importance; consider how in 2012, Barack Obama won Ohio, Florida and Pennsylvania, and each of these states then flipped in Trump's favor four years later.

But in such an unprecedented election year, everything could be up for grabs, and Biden is in a sprint to reach voters in these states. This week the vice president is touring Florida, vying for the Sunshine State's 29 electoral votes and its huge electoral influence. Even in a state like Pennsylvania, with its large population of white and rural voters (and 20 electoral votes), Biden is maintaining his lead. The Biden campaign is also putting dollars into ballooned advertisements in Ohio, where there are 18 electoral votes on the table. Polling from September puts Trump and Biden neck-and-neck there, though some polls do report that Biden is leading.

"We’re going to win Ohio," Sen. Sherrod Brown (D-Ohio) said in an interview, per Politico. "Biden is the most pro-worker nominee of either party in a generation." Surrogates for presidential candidates are naturally going to ooze confidence when they stump on behalf of their choice, but this year there may be reason to believe fortune-telling statements like Brown's. The Trump administration is muddling through a disastrous economic recession, with Trump at risk of becoming the first president to leave office with an economy that has fewer jobs than the one he inherited, if he does lose in November. Additionally, middle-class and working-class people in places like Ohio who have suffered during the coronavirus-induced economic downturn have seen just one $1,200 check from the Trump administration to help them weather seven months (and counting) of a crisis.

If anything, the shift in campaigning isn't surprising, but confirms what we've been seeing for a while. As Mic reported in early September, "Trump is trailing or underperforming in key — and surprising — electoral demographics. In particular, Trump is losing ground with men, tied with Biden among voters without college degrees, and trailing by a whopping 13 percentage points when it comes to suburban voters overall. Even with the poll's 1-point margin of error, the results show that Biden is winning suburban voters handily."

Gains in the top of the ticket may also be indicative of Democratic wins down the ballot. In deep-red states like South Carolina, Trump and Biden are locked in a "virtual tie," which could bolster challenger Jaime Harrison in his effort to oust incumbent Republican Sen. Lindsey Graham, one of Trump's loudest supporters. Even if Democrats are looking confident now, though, we'll have to wait until November to see what the voters really think.

More like this
There are already 19 QAnon candidates running for Congress in 2022
By Rafi Schwartz
Here's a chilling peek into just how close Trump got to running a police state
By Rafi Schwartz
Marco Rubio wants to give survivors of domestic terrorism … one year of student loan relief?
By Rafi Schwartz
Stay up to date