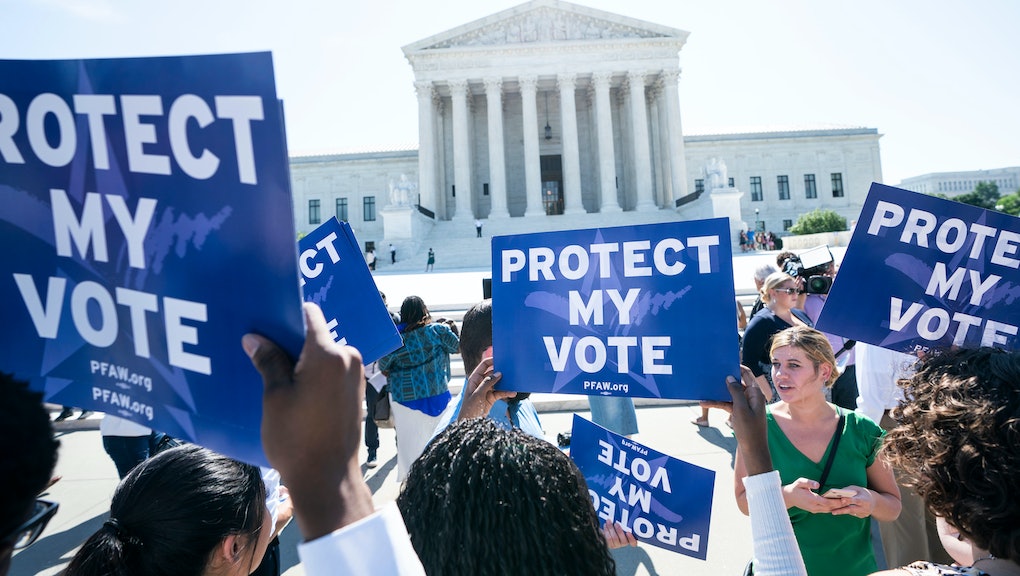 What if there were a national conspiracy of legislators and lawyers whose main goal was to dilute the voting strength of minorities, so that they could cling to power even as their party comprises an increasingly small share of the electorate? What if they consulted with experts at a secret event, where they learned the best tools and tactics to pull off the scheme — including how to avoid legal repercussions for their actions? What if there were literally a class being taught on Republican gerrymandering?

The experts spent the afternoon explaining precisely how the legislators in attendance should gerrymander their districts, which they called “adult political blood sport.”

“You are going to be sued,” said Mitchell, by way of an introduction. She made clear that gerrymandering will have legal consequences — and then proceeded to advise the audience on how to avoid those consequences. “Let us begin with the fact that, probably, your notes from this conference, and this workshop, will probably be part of a discovery demand,” she said. “My advice to you is: If you don’t want it turned over in discovery, you probably ought to get rid of it before you go home.”

Over the past few decades, Republicans have advanced a series of aggressive gerrymandering actions, usually designed to limit the power of minority voters in red states. Last year, the Supreme Court ruled that it could not weigh in on partisan gerrymanders because it would be an inappropriate allocation of political power. That cleared the way for Republicans to run the same playbook in the 2021 redistricting process. Thanks to the tactics shared at ALEC, they’ll be well-prepared.

Farr, who lost a bid to become a federal judge after controversy over his role in suppressing minority votes in North Carolina, described how important it is to use neutral language while pursuing aggressive redistricting.

“You never know what you might say, even if it’s unjust, that the left can take out of context and try to use to make the Republicans look like they’re evil,” Farr said, per Slate. He then explained how he operates in court when the gerrymandered maps are inevitably challenged for being unfair.

“It’s like I’m a director of a play,” Farr said. “I know what I want the play to look like for the judges when we actually have to go and defend what we’ve done in court, and so this is why you want to make it look like — I know most of you know this already — you’re very cordial, cooperative with the minority party or the opposing party. … The more you take the high road in the legislative process, the better it’s going to look in court when you have to defend what you’ve done.”

Meanwhile, von Spakovsky urged legislators to try to switch the way their states count voters from people to citizens, which is exactly what President Trump tried and failed to do with the U.S. census, following the advice of the late Republican gerrymandering wizard Thomas Hofeller.

“Liberals do not want you doing this,” von Spakofsky said, noting “the higher the number of noncitizens in a district, the greater the chances they’re going to vote for a liberal.” He railed against the idea that “states with large numbers of aliens, particularly illegal aliens, are getting more political power.”

Westmoreland laid out how he worked with minority Democratic legislators in his state, getting them to draw districts with heavy minority populations in order to protect their own seats — making surrounding districts whiter in the process. He urged those in attendance to seek out their own “dance partners.”

“Always know who’s going to end up ruling on your maps,” Westmoreland said. “It’s important to work with the judges, the judicial system. You need to work for your attorney generals. … You need to work with as many organizations that you can to make sure that not only you win the majority, but that you elect people that are going to be able to supervise what these maps, or what you, come up with.”

While these leaked tapes are embarrassing for Republicans, there’s no reason to believe anything will change their behavior. After all, gerrymandering has worked so well for them already.