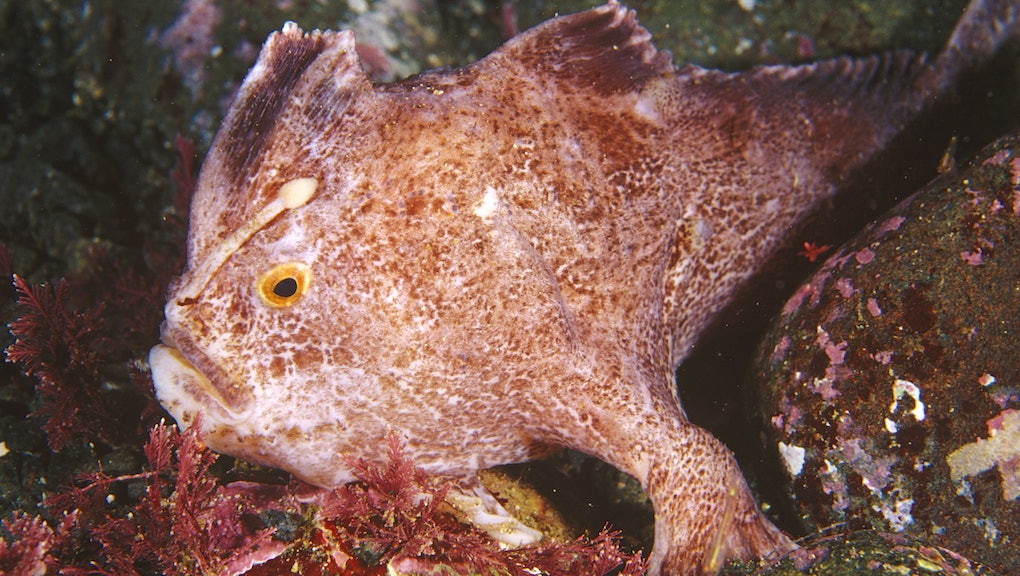 Handfish are a species of small, adorable fish that move along the seafloor with big fins that look like hands. Instead of swimming smoothly in the water, they crawl around on all four fins like some kind of unbalanced dog. Their awkward, clumsy walk; squishy, round faces; and perpetual frowns make for an impossibly charming fish. And because we can never have good things, these cuties are at risk of extinction.

Once again, warming waters are the primary culprit.

"If you've never seen a handfish before, imagine dipping a toad in some brightly colored paint, telling it a sad story, and forcing it to wear gloves two sizes too big," the Handfish Conservation Project says on its website. These funky fish tend to mind their own business, crawling around in little colonies, and sticking close to their home around Tasmania.

There used to be 14 species of handfish. However, this year, the International Union for the Conservation of Nature (IUCN) updated their endangered species list to announce the extinction of the smooth handfish. Researchers hadn't seen this uniquely barbed fish since 1802, despite thorough searches over the past 200 years.

The IUCN's declaration of extinction marks the first time in modern history that a fish species has been declared extinct. It's a bad sign for the rest of the handfish crew, at least seven of which haven't been seen since 2000 or earlier.

Conservationists aren't ready to give up on the handfish. These creatures are perfectly fine if their environment remains stable. Unfortunately, nothing is stable right now.

"They spend most of their time sitting on the seabed, with an occasional flap for a few meters if they're disturbed," marine ecologist Graham Edgar told Scientific American. "As they lack a larval stage, they are unable to disperse to new locations — and consequently, handfish populations are very localized and vulnerable to threats."

Such threats include pollution coming from various industries in Tasmania that ruins the water quality in the area. Fishing, or 'dredging' for scallops can also destroy the seabed where the handfish crawl around. Ocean reefs are disappearing at an increasing rate, too, which effects the livelihoods of handfish, crabs, seagrass, and other marine life within the ecosystem. Invasive creatures, like sea urchins, have also destroyed the places where the fish lay their eggs.

Lastly, the warming waters are likely causing a big part of the handfish's decline. Tasmania typically has colder waters that the handfish love to live in. But warmer currents have been coming through lately, changing and reducing their habitats.

Conservationists are in a hurry to collect more data on these threatened creatures before more of them end up on the extinct list. Without a better understanding of how the handfish live and survive, they can't create a good strategy to save the ones left.

"Despite being such charismatic and quirky little fish... there is so little we know about them," marine ecologist Jemina Stuart-Smith told National Geographic. Scientists have to track the colonies of fish they find, continue their search for new groups, and improve captive breeding efforts so the fish can live full lives in captivity as well.

Researchers have to figure something out pretty quickly. The species' numbers are already so low that Edgar worries "if [the handfish are] lost from an area, they're probably not going to come back."