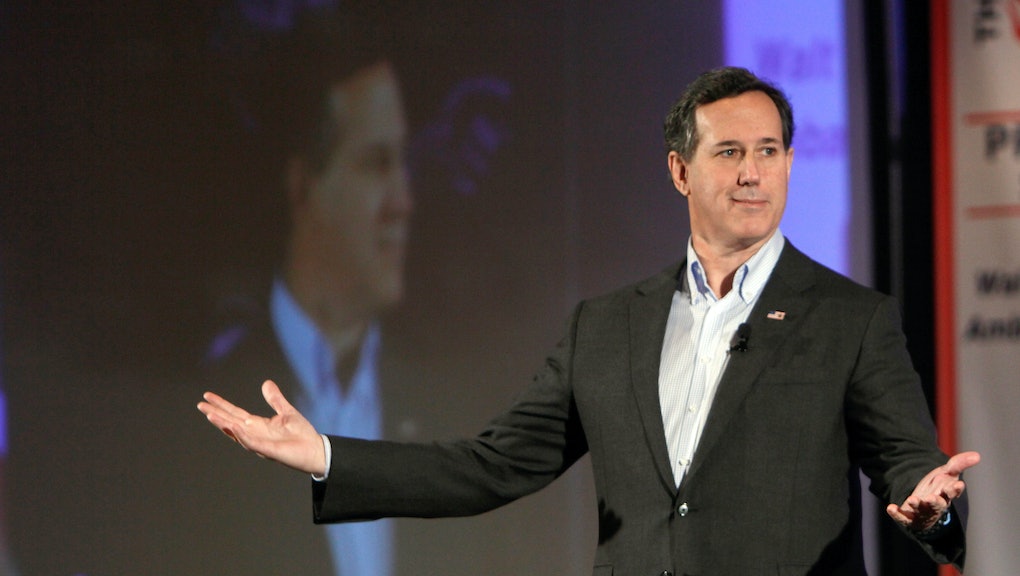 Rick Santorum's explanation of America's founding is a masterclass in ignorance

Look, I don't want to do it, and you probably don't want me to do it, but I'm afraid we've gotta talk about Rick Santorum. Remember him? The former United States senator-turned-frothy fecal mix and current CNN contributor? Of course you remember him. You wish you didn't, but alas, you're not that lucky. Neither am I. And so, here we are, forced once again to talk about Rick Santorum, and his latest desperate attempt to remind the world how much he truly, fundamentally sucks.

If you think about this country, I don't know of any other country in the world that was settled predominately by people who were coming to practice their faith. They came here because they were not allowed to practice their particular faith in their own country. And so they came here, mostly from Europe, and they set up a country that was based on Judeo-Christian principles — when I say Judeo-Christian, the Mosaic laws, 10 Commandments, and the teachings of Jesus Christ, the morals and teachings of Jesus Christ. That's what our founding documents are based upon. It's in our DNA.

Putting aside the fact that there are many, many countries settled by people acting on what they believed was a religious mandate, Santorum's invocation of "Judeo-Christian principles" is a dead giveaway that what he's really trying to do is push a strain of Christian nationalism, cloaked under guise of philo-Semitism, at the express exclusion of other faiths, Islam in particular.

It only gets worse from there:

You know, if you think of other countries like Italy and Greece and China, Turkey and places like that, they've all, sort of, changed over time. I mean, they've been there for millennia in many cases. And their culture has, sort of, evolved over time. But not us.

If you think about it, these countries with cultures that have existed for thousands of years, have — get this! — changed a little too. Wild stuff! Anyway, we're only a couple hundred years old, and we're never, ever, ever gonna change. USA! USA!

And here we come to the real nadir of Santorum's remarks:

We came here and created a blank slate. We birthed a nation from nothing. I mean, there was nothing here. I mean, yes we have Native Americans, but candidly there isn't much Native American culture in American culture. It was born of the people who came here pursuing religious liberty to practice their faith, to live as they ought to live, and have the freedom to do so. Religious liberty.

It takes a real soup-brained type of self-centered buffoonery to go from "there was nothing here" to "we have Native Americans" to "there isn't much Native American culture in American culture." Just an incredible, impressive triptych of assholery, that somehow manages to be racist, then acknowledge said racism, and then double down on it anyway.

Not to mention, he's wildly wrong to begin with. The Native culture he mentions almost as an afterthought? In reality, there were hundreds of tribes, with unique cultures and traditions and histories. And yes, while Native culture is appallingly underrepresented in the United States, it does exist in places (such as in North Dakota, a state Santorum actually won during the 2012 Republican presidential primary). To the extent that it doesn't, that absence is a deliberate, calculated outcome of centuries of ethnic cleansing and genocide. "There isn't much Native American culture in American culture," as Santorum put it, because American cuulture has been fundamentally bigoted, hostile, and outright dangerous toward Indigenous peoples.

If you really feel like watching Santorum blabber on about things he clearly has no business talking about, feel free to watch his complete speech here. Or you can watch the relevant sections, collected by Media Matters For America's Jason Campbell, below.

More like this
Biden's new office to fight for environmental justice already faces an uphill battle
By AJ Dellinger
Vaccines are good. Threatening to evict someone over them is not
By Rafi Schwartz
Insurrection enthusiast and acid trip 'Batman' villain Roger Stone got served court papers on live radio
By Rafi Schwartz
Stay up to date