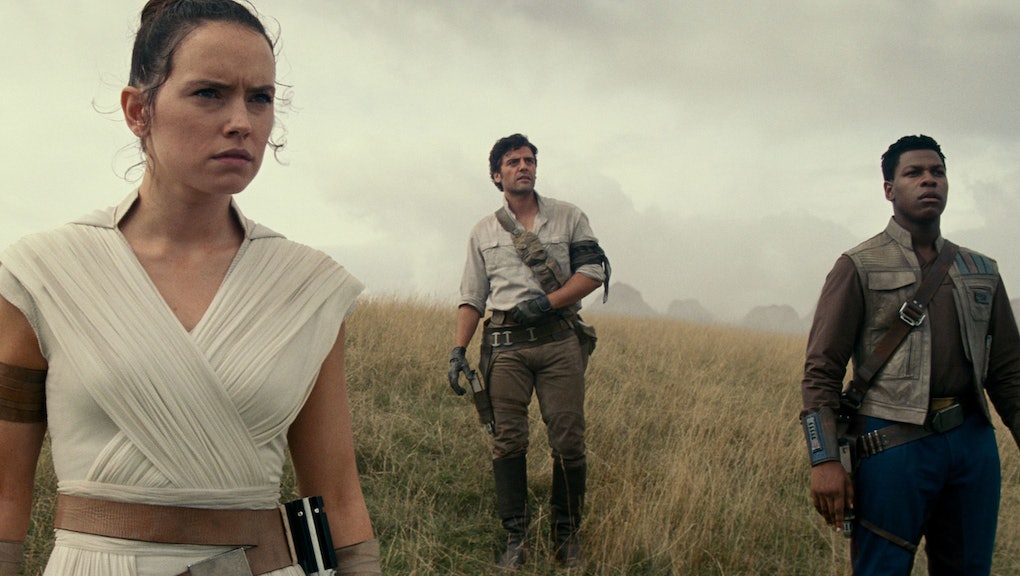 If you haven’t seen Rise of Skywalker, stop reading. This post is filled with spoilers.

For the first hour of the most recent Star Wars film, The Rise of Skywalker, I was on board. Our beloved heroes are on a mission trying to bring life to a rebellion that was nearly destroyed at the end of The Last Jedi. It’s the kind of fateful adventure that brought me and millions of other fans to Star Wars in the first place. But unfortunately, director J.J Abrams would spend the rest of the film trying to resurrect not just the rebellion, but everything director Rian Johnson rid the galaxy of in the preceding film.

In Abrams’s ninth and final installment of the series. He brings back to life everyone who was thought dead and gone. Sure, the Force has always had ghosts, and it is true that those who possess the Force can go beyond the confines of life and death. But Abrams takes this particular piece of the Star Wars lore a step too far, using it to undo the farewells of Episode VII and VIII. Both Luke Skywalker and Han Solo appeared again to guide forward characters who by now should have been able to navigate their stories on their own.

First, Han appeared to Kylo Ren as a ghost in order to turn his son back from the Dark Side. Then, Luke Skywalker appeared to Rey to convince her to go and fight Emperor Palpatine. There were some silly lightsaber tossing and hand offering, and it seemed like a lazy way to please fans who weren’t ready to depart from characters they were deeply attached to.

Emperor Palpatine was initially killed by Darth Vader in Return of the Jedi. He was thought to be a non-entity, the way most dead villains are. JJ Abrams instead chose to bring him back to life using the power of the Dark Force. Don’t ask me to expand further on the logic that delivered us Palpatine on life support. I don’t understand it. It was not clearly explained in this film.

Palpatine’s brand of villainy is reminiscent of that 1970s American fear of Satanic cults, an inexplicable and all too powerful evil used to explain away the serial killers and child abductors. For the few moments that the Star Wars universe dared to suggest that the monsters were motivated by familiar human sins of greed, the thirst for power, the hoarding of resources, the shameless subjugation of others, the series felt exciting and relevant again. When the narrative once again rested on the shoulders of Palpatine, any sense of forwarding propulsion slipped away.

As Phil Owen wrote for The Wrap, Palpatine as the secret string-puller of the entire operation only “makes so much of what happened in the previous two movies either meaningless or nonsensical.” As the film progresses, the absurdity only intensifies. The story feels jam-packed, and nearly all of the dialogue is in service to telling the audience chunks of the plot never really discussed or even alluded to in prior films. The conclusion of the Skywalker story feels like the rushed series finale to a show that got canceled without much notice.

What JJ Abrams was willing to kill with Rise was limited it seemed, by absolute necessity. Chewbacca was only dead for five minutes — long enough so that the audience was lead to believe we might get to witness Rey grapple with complicated feelings of guilt, darkness, the consequence of power. But rather leaving us feeling uncomfortable or taking any risks with the protagonist of the film, Chewy is revealed to not actually be dead. Leia Organa’s death was the only one that elicited any real emotion because we were not just saying goodbye to our beloved princess and general, we were also saying a final goodbye to Carrie Fisher. The death of Kylo Ren was lost in the flurry of too many other things happening – a celebration of victory, the kiss that just happened, the question “Why did all the Sith spectators turn to dust?”, and Finn and Poe’s discovery of Leia’s death.

The most powerful death that JJ Abrams’ orchestrated wasn’t actually a death at all. It was the total dismissal of Kelly Marie Tran’s Rosie Tico, relegated from Fin’s charming, instructive, and brilliant sidekick in The Last Jedi to just another communications specialist in Rise. No matter the real reason for the decision to keep her screen time down to less than two minutes — Tran was subjected to such vicious racism and harassment on the web that she quit social media. To relinquish her story arc after that, it gave the impression that the loud racists had won. By doing so, Fin’s character also seemed to become tertiary, underfed and supporting. What was Fin going to tell Rey? Why was he Force-sensitive? What’s up with Fin and Poe’s chemistry? It was yet another feeling of massive regression.

Instead of moving forward, The Rise of Skywalker relied on pleasing the emotional needs of fans who felt entitled to the story — a shame when the joy of any great movie is to be moved in a direction you couldn’t have imagined. The final trilogy of Star Wars trilogies ended right where it began all those years ago, on the planet of Tatooine, with one lonely Jedi naming themselves as a Skywalker. By ending the story right where it started, and making the last leg of the trip so thoroughly senseless, it left me wondering why I’d bothered to follow this journey across the galaxy in the first place.

More like this
In 'Roadrunner,' Anthony Bourdain shows us the beauty of the mundane
By John Saward
Dua Lipa has officially distanced herself from DaBaby
By Kara Weisenstein
8 shows like 'Ted Lasso' to watch if you need more feel-good TV
By Brandon Yu
Stay up to date