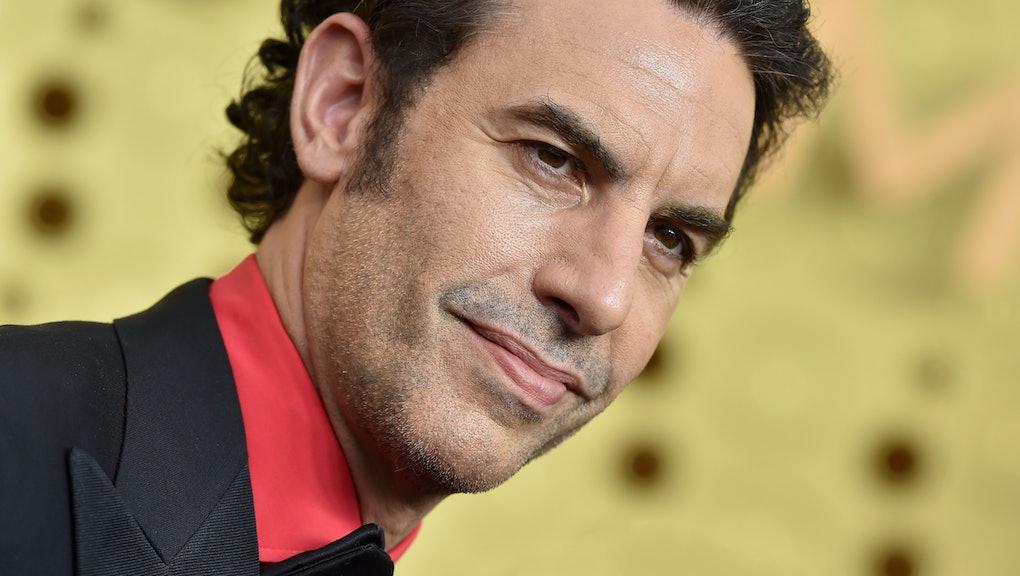 The conservative “March for Our Rights 3” rally in downtown Olympia, Washington, had a surprise musical guest on Saturday: comedian Sacha Baron Cohen, disguised in padded overalls, a fake beard and a straw hat, infiltrated the right-wing event and took the stage as the lead singer of a bluegrass band. In what might be his most elaborate prank to date, Baron Cohen led the crowd in a racist singalong about President Barack Obama, Dr. Anthony Fauci and the “Wuhan flu” that went on for more than eight minutes.

The shocking tune, which at least some rally attendees enthusiastically sang along with, featured lyrics like: “Mask-wearers. What we gonna do? Inject them with the Wuhan flu. Journalists. What we gonna do? Chop ’em up like the Saudis do.” By the time Baron Cohen got to singing about massacring Asian people (“nuke ‘em up like we used to do”), he had a chilling call-and-response going with the sparse crowd.

Baron Cohen has thus far kept mum about the purpose of the prank, but the assumption is it’ll feature in the next season of his Showtime series Who Is America? The lengths the comedian went to infiltrate the right-wing rally are plenty impressive: according to organizers of the “March for Our Rights 3” rally, Baron Cohen first posed as the leader of a Southern California PAC, which popped out of nowhere a week before the event and offered to sponsor everything.

Matt Marshall, founder of the Washington State Three Percent, a "constitutionalist" group with militia ties, said he and the other event organizers thought the last minute sponsor must be too good to be true. But their fears were quelled when the group, “Back to Work USA,” made good on around $50,000 worth of contracts with vendors, for things like portable toilets, security and entertainment. "I mean, they played the game," Marshall told NPR. "We talked to them about how frustrating it was to be labeled racist, and they agreed with us. Like, we really let the guard down and trusted them."

As the secret sponsor, Baron-Cohen also hired his own security. And once he took the stage at the rally, they blocked Marshall and the other event organizers from cutting the power or otherwise hauling the comedian off stage. After more than eight minutes of Baron-Cohen’s performance, when the small crowd finally realized they were being played and turned on him, his security detail rushed the stage and hustled him into a waiting ambulance, contracted in advance to be the comedian’s escape vehicle.

"It was just kind of a kick in the teeth," said Marshall, who is running for Washington state legislature and has spent years trying to convince critics that Three Percenters reject racist ideologies like white nationalism. With a ton of cash, a bluegrass band and a security detail, Baron Cohen proved him wrong in a matter of minutes.

More like this
The NFT gold rush, explained by the world's first meme manager
By Kara Weisenstein
How “stoopers” turned New York City sidewalks into trendy, sustainable thrift shops
By Jasmine Vojdani
Riiiiiiight, Ellen DeGeneres is ending her talk show because she's bored
By Kara Weisenstein
Stay up to date