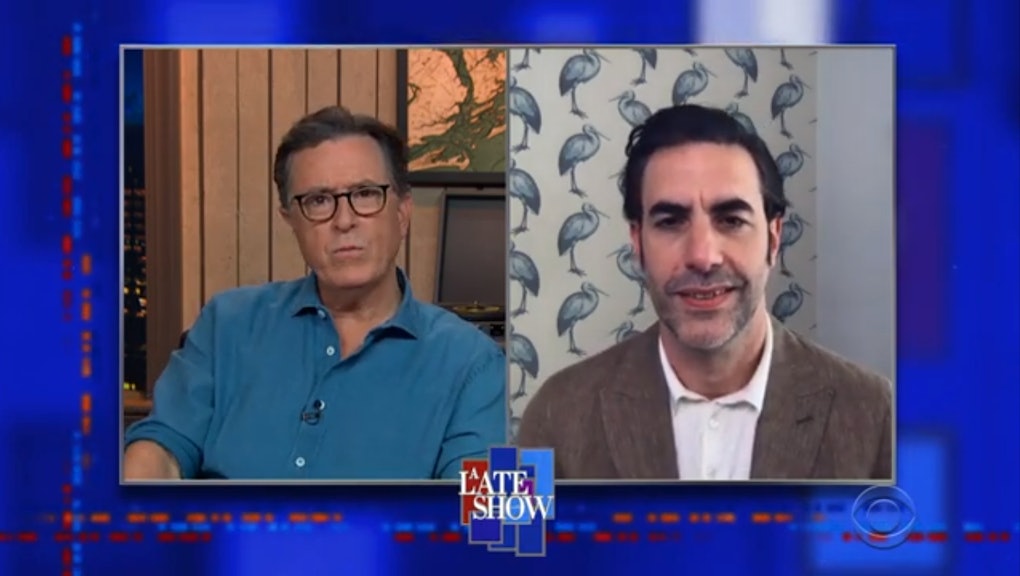 It’s remarkable enough that Borat Subsequent Moviefilm would hit streaming 14 years after the first movie’s release, but Sacha Baron Cohen’s sequel went ahead and became the most talked-about movie of the year. Maybe this was inevitable: something so focused on the president and his close associates could only wind up with its own news cycle. On Monday night, Cohen sat down with Stephen Colbert to address President Trump, Rudy Giuliani, co-star Maria Bakalova’s nascent Oscar campaign, and the new challenges of making a Borat moviefilm when everyone in America knows the character.

Breaking from form a bit on this press cycle, Cohen appeared as himself — presumably to do double-duty on promoting Borat and Aaron Sorkin’s The Trial of the Chicago 7, although I’d love to hear Borat talk about that one. On Friday, Trump called Cohen a “creep” and claimed to have figured out his shtick when they chatted for Da Ali G Show in 2003. “Years ago, you know, he tried to scam me. And I was the only one who said no way. That’s a phony guy,” Trump told reporters. This sounds similar to Giuliani’s explanation earlier this summer, and Cohen swats it away all the same, claiming that Trump “completely believed Ali G was real”:

“Well, I’m sure when he was hanging out with his good friend Jeffrey Epstein, they probably spent a lot of time talking about how creepy I am," he said. "And, yes, I am a professional phony like him."

Cohen’s already responded at length to when Giuliani either went for a super long shirt tuck or something more indecent with Borat’s daughter in the room. Although Giuliani’s pleaded innocence, Cohen argues the clip in context doesn’t quite look like your average shirt management, and wonders what else he might be doing in hotel rooms when the cameras aren’t rolling:

“Well, he said that he did nothing inappropriate and, you know, my feeling is, if he sees that as appropriate, then heaven knows what he’s intended to do with other women in hotel rooms with a glass of whiskey in his hand.”

Colbert and Cohen discuss another one of the film’s centerpieces, when a disguised Borat leads the far-right rally in a racist singalong. As Cohen tells it, this scene was quite a bit more tumultuous than Subsequent Moviefilm lets on. Apparently, some Black Lives Matter activists were counter-protesting the militia groups at the event, and one protester noticed Cohen was leading the singalong:

“One of them went, ‘Oh my God, it’s Sacha Baron Cohen!’ Word got out that it was me, and then the organizers and a lot of people in the crowd got very angry. They tried to storm the stage. Luckily for me, I had hired the security, so it took them a while to actually storm the stage.”

“I mean, this was the first movie where I’ve had to wear a bulletproof vest. So, you know, we were aware that somebody — actually one of the guys that stormed the stage went for his pistol...So he went for his pistol and luckily enough I had — there was a very brave guard who actually grabbed his hand and said, leaned in and said, ‘It’s not worth it, buddy.”

Although Cohen makes a case for the newcomer Bakalova to win an Oscar, you can’t help but think his stunts in both films warrant a make-up nomination for himself.

More like this
Disgraced congressional candidate Roy Moore tried to sue Sacha Baron Cohen. It didn't go well
By Kara Weisenstein
In 'Roadrunner,' Anthony Bourdain shows us the beauty of the mundane
By John Saward
Phoebe Bridgers and John Mulaney announced tour dates and the internet imploded
By Chloe Stillwell
Stay up to date