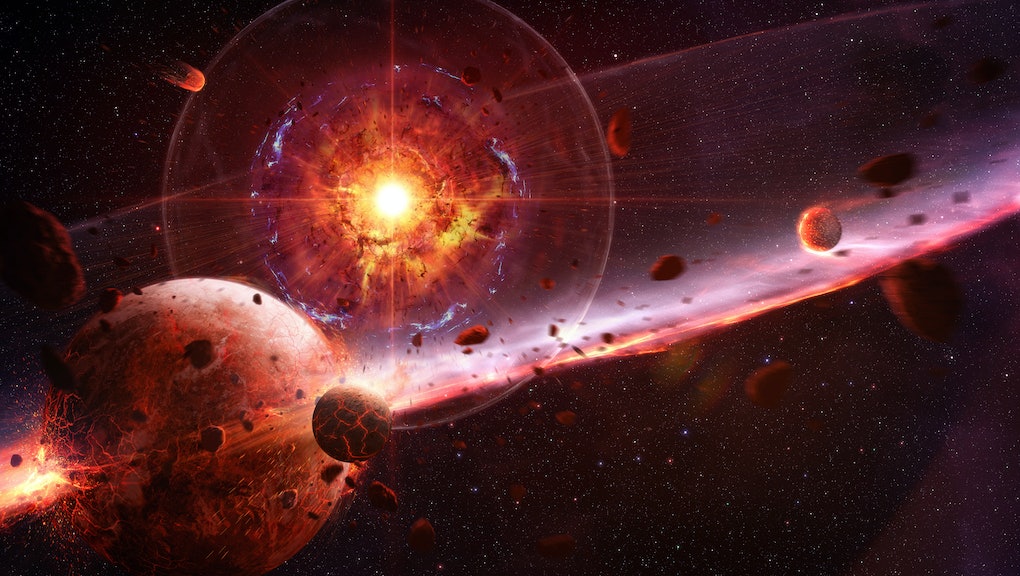 All About Space Magazine/Future/Getty Images

When it comes to extinction events, the Earth is an old pro. As a matter of fact, we're going through our sixth mass extinction right now. But the causes of many prehistoric events that wiped out large swathes of life are still a mystery to researchers. Last week, scientists were able to shed a bit of light on one of them when they published evidence suggesting the second extinction event, which occurred about 350 million years ago, was sparked by an exploding supernova some 65 light-years away.

The study, published in the journal Proceedings of the National Academy of Sciences, theorized the distant explosion (or explosions) sent out waves of UV rays that wrecked the planet's ozone layer, exposing the Earth to cosmic rays before the layer could be restored. It killed off about 70 percent of all species.

The Late Devonian Extinction, as it's called, snuffed out a lot of marine life, including armored fishes and reef-building creatures. (Which is a shame, because we could really use a lot more of those reef-builders right now.) Fossilized evidence has pointed to something happening with the Earth's ozone layer; many scientists assumed it must've been caused by some sort of global warming event similar to what we're going through now.

These researchers, however, have proposed a different theory. Ancient plant spores revealed signs of damage from UV light that lasted years, meaning the Earth's ozone layer must've been disrupted for a long time. If the ozone is ruined for that long, the planet is left exposed to cosmic UV rays that can sink into the soil and oceans and ruin the local ecosystems.

What could damage the Earth's ozone layer that broadly and for that long? Supernovas, the researchers believe.

"Recent evidence indicates that the final extinction event [during the Devonian Period] may have coincided with a dramatic drop in stratospheric ozone, possibly due to a global temperature rise," wrote the authors of the study. "Here we study an alternative possible cause for the postulated ozone drop: a nearby supernova explosion that could inflict damage by accelerating cosmic rays that can deliver ionizing radiation," which can linger for hundreds of thousands of years.

So it's not exactly a far-fetched idea, but scientists have yet to put a finger on the possible star that might've gone supernova during this time period.

The new findings come just three months after another research team presented the alternative possibility that the first extinction event occurred due to volcano eruptions spewing carbon dioxide into the air, eliminating 85 percent of all marine life on the Earth.

More like this
Heat waves are killing baby birds by forcing them to flee their nests before they can fly
By AJ Dellinger
This goldfish is an absolute unit and we're all to blame
By AJ Dellinger
For a blessed 11 minutes, Jeff Bezos was not on Earth. Here's what he missed
By AJ Dellinger
Stay up to date