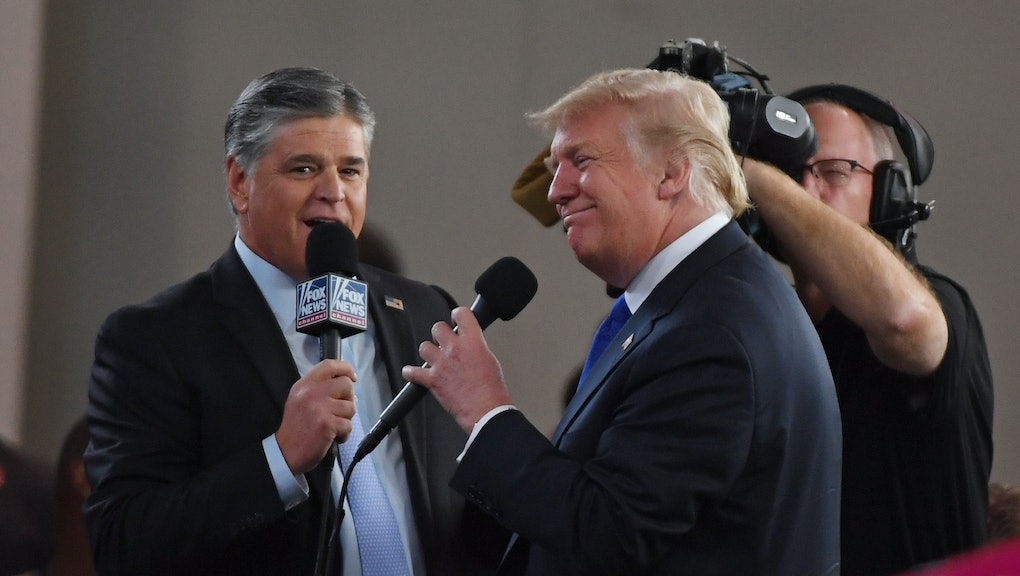 Hey, remember literally just a few days ago when Sean Hannity pleaded with his audience to take coronavirus seriously and said, "It absolutely makes sense for many Americans to get vaccinated?" Well, on Thursday night, Hannity took to the airwaves to clarify that while it may have seemed like he had some sort of sudden revelation about the importance of public health and herd immunity, he actually doesn't care.

“I never told anyone to get a vaccine,” Hannity said, after reading off a slew of headlines that credited him with encouraging his viewers to get the coronavirus vaccine. “I have been very clear. I am simply not qualified.” Hannity reasoned that it would be wrong for him to tell anyone to get the jab that provides essential protection against the worst symptoms of coronavrius, limits the risk of hospitalization, and reduces the spread of the infectious disease. “I am not a medical doctor. I know nothing about your medical history or your current medical condition," he said, adding that he believed it would be "inappropriate" for him to encourage vaccination.

Hannity's defense that he's not a doctor is a bit odd, given that he's had no problem making medical diagnoses of people on the air before. He's claimed that Joe Biden's health is in decline because of his stutter, questioned his mental health and acuity, and pushed conspiracy theories about the health of Hillary Clinton during her 2016 Presidential candidacy, including speculating that she had a seizure.

If there is one thing Hannity is right about, it's that he never endorsed the vaccine. While he did say on air that he believes in the science behind the vaccine, he's spent most of his time undermining it. On his radio show, which has a much larger audience than his prime time Fox News program, he has taken calls from listeners and told them that they are making the right decision by not getting the vaccine. Even after telling his Fox News audience to take coronavirus seriously, he told his radio listeners to do their own research about vaccines and talked up therapeutics like hydroxychloroquine.

Forget for a moment that (hopefully) no one is expecting Hannity to prescribe to them any sort of specific treatment or diagnosis. Hannity's audience is old. More than 2.5 million people tune in to watch him every single night, and more than half of them are over the age of 65. These are the people who are most at risk of experiencing serious symptoms from the coronavirus. The mortality rate of the disease increases exponentially for older people, and people 65-74 are 95 times more likely to die from the disease than 18-29 year olds, according to the Centers for Disease Control and Prevention. So whether Hannity actually knows the health history of everyone watching or not, odds are high the members of his audience should get the vaccine.

Folks tried to give Hannity credit for something he probably didn't deserve, and instead of simply accepting it and getting praise for helping to combat vaccine hesitancy as coronavirus cases are once again on the rise, he made sure that no one could mistake him for someone with the public's best interest at heart.

More like this
The plant-derived COVID vaccines of the future won't need refrigeration — and that's huge
By Melissa Pandika
Vaccines are good. Threatening to evict someone over them is not
By Rafi Schwartz
I never want Tucker Carlson to stop talking about Nicki Minaj's cousin's friend's enormous balls
By Rafi Schwartz
Stay up to date