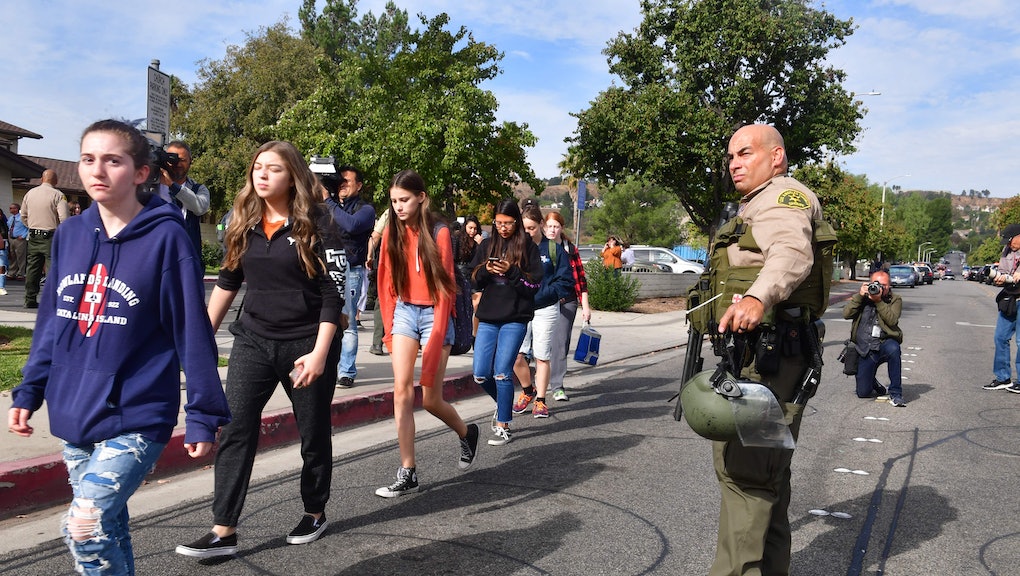 Two teenagers were killed and at least three more were wounded during a shooting at a California high school Thursday morning. Authorities responded to reports of shots fired at Saugus High School in Santa Clarita, about 40 miles north of Los Angeles, around 8 a.m. local time, NBC News reported. Saugus High and every other school in the William S. Hart Union High School District were placed on lockdown while law enforcement investigated the matter.

"This is an active shooter situation," the Santa Clarita Valley sheriff's office tweeted during the incident. "If you live in neighborhoods anywhere near Saugus High, PLEASE LOCK DOORS and stay inside. If you see suspect, male dark clothing, in backyards, etc. CALL 911.”

According to the Los Angeles Times, the 16-year-old gunman was standing in middle of the campus quad when he pulled a handgun from his bag and opened fire. Five students were shot before the teen turned the gun on himself.

Two students, a 16-year-old girl and 14-year-old boy, died from their injuries. The remaining students are still being treated and their condition is unknown. The shooter is also in the hospital for a gunshot wound to the head. He turned 16 on Thursday. An empty .45 caliber semi-automatic pistol was recovered from the scene, and authorities are in the process of obtaining a search warrant for the boy’s home.

Mike Kuhlman, deputy superintendent of William S. Hart Union High School District, said the incident happened before classes started. "Our hearts go out to the families of those affected by this terrible incident,” Kuhlman said. “Words are insufficient in times such as these.” White House spokesman Judd Deere said President Trump is “monitoring the ongoing reports” about the shooting, per The Washington Post.

California Sen. Kamala Harris (D) called for gun control during an impassioned call with MSNBC. She dubbed Congress's inaction on gun legislation "pathetic" and singled out Senate Majority Leader Mitch McConnell (R-Ky.) for not bringing any bills on the matter to a vote.

In a separate interview with CNN’s Anderson Cooper, she spoke in similarly strong terms. “Our kids are living in fear, wherever they live, they are living in fear,” Harris said. “This is yet again another reason why they are so afraid, that literally they will die. It’s tragic in the most fundamental way. It is tragic. It is senseless. It is unnecessary. It is devastating.”

More like this
Texas Republicans are plotting to create a two-tier election disenfranchisement system
By Rafi Schwartz
13-year-old Adam Toledo put his hands up. Chicago police killed him anyway
By Rafi Schwartz
Daunte Wright would be alive "if he would've just complied," Minnesota police bigwig says
By Rafi Schwartz
Stay up to date