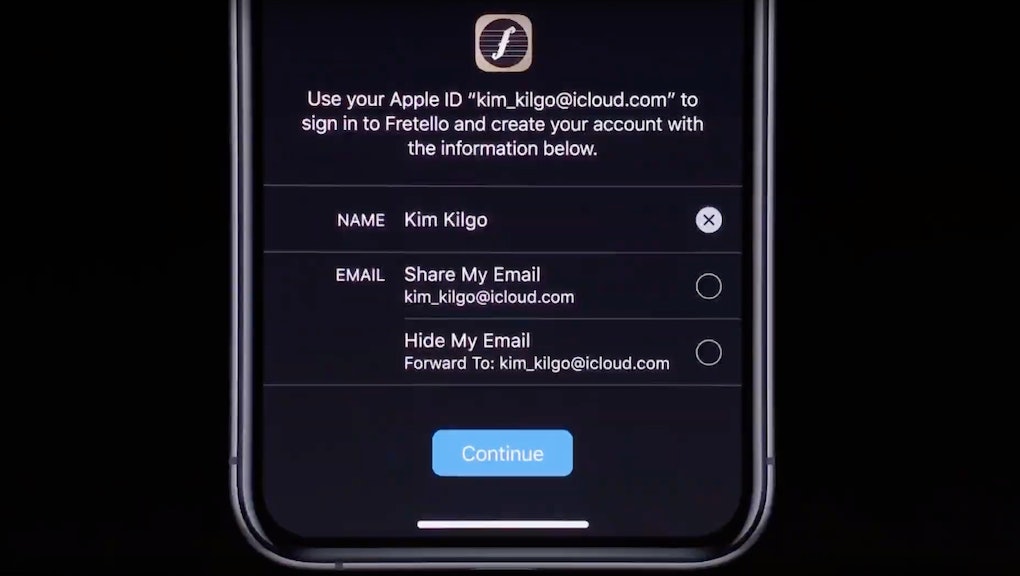 Apple is continuing its crusade to protect user information from third-party apps. During its annual Worldwide Developer's Conference (WWDC), the company announced a new "Sign In with Apple" feature that will allow you to create new accounts using your existing information associated with your Apple account. And for those growing increasingly wary of relying on Facebook to sign in to essential apps, the privacy safeguards could be a game changer.

Apple's new feature, which will be available when iOS 13 is released later this year, will place a "Sign In with Apple" button on the login screen of apps that support the feature. When you click on it, Apple will let you set up a new account that will be linked to the email address associated with your Apple ID and you'll be able to login using Face ID or Touch ID confirmation (though there are still some privacy concerns with those biometric checks when it comes to law enforcement).

The real power of Sign In with Apple comes from control over what is shared with the apps. While apps can ask for information like your name and email address, Sign In With Apple gives you the ability to bypass those requests. The service will create a unique email address that will forward to your real one so the app never has direct access to you. It will even generate a random ID so the developer basically has no information that would identify you. Apple is also promising that it won't track any of your app activity, even when you use its sign-in feature.

Apple's new sign-in feature should be a stark contrast to similar offerings from Facebook and Google. You've probably seen these login options on just about every app or website and may even use them for a good reason: they don't require you to remember an additional password and, importantly, don't pass your existing password on to a third-party service. Security firm AVG has even recommended using the features as a safe alternative to a standard, potentially insecure password.

The problem is that Facebook and Google have a specific reason to offer this type of connection between its platform and those services: to share and collect more data. When you log in using Facebook, the social network usually hands over whatever is on your public profile. That may include your name, profile picture, and other biographical information connected to your account. Likewise, Google will typically share your email address or even your phone number if linked to your Google account. In some cases, it's even more than that. Some apps will collect your friends or request access to your calendar.

Facebook and Google have both gotten better about giving users a bit more granular control over the type of information that can be shared with apps, although those changes have primarily been spurred by privacy-shattering events like Facebook's Cambridge Analytica scandal.

It's fair to question Apple's motivation here, as it is with any tech company's attempt to further engrain itself in your life. But Facebook and Google have made it their business to collect and monetize user data to the best of their ability. That typically has not been Apple's business model. Don't be mistaken, the company collects tons of data — from location data to device performance information and plenty in between. But it doesn't explicitly monetize it in the same way by sharing the data with other companies. It does sell some ads and allow for some targeted advertising practices, as USA Today noted recently, but it also gives users the ability to opt out of many of those.

One of Apple's biggest selling points at this point is its focus on privacy. The company has built an entire ad campaign around it, and made a big to-do of privacy features during WWDC. Apple announced that with the release of iOS 13, developers won't be able to see the details of Wi-Fi networks that you are using to or any of your Bluetooth connections. It is also introducing the ability to share your location with an app just once and will alert users how often apps are checking their location. Assuming Apple makes good on its promises, your apps are going to know less about you than ever before.

More like this
Why is Facebook this confused over letting Donald Trump back?
By Rafi Schwartz
The ethics of solar power are more complicated than you think
By Vanessa Taylor
He made a cryptocurrency called SCAM. Now he's trying to make it legit
By AJ Dellinger
Stay up to date