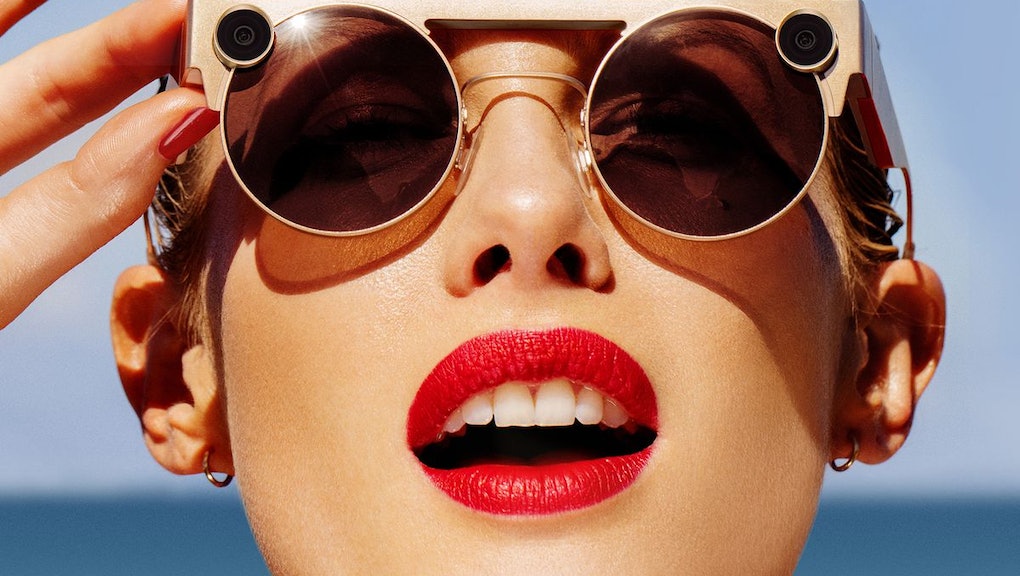 Snap Inc. really, really wants to make this work. Since 2016, the Snapchat creator has launched two versions of their sunglass-camera hybrid known as Spectacles, and this year they're coming back with yet another iteration. Snapchat Spectacles 3, a redesigned version of the AR glasses poised to receive a limited release this November for $380.

The exorbitant price tag makes them more expensive than last year's model, right off the bat. According to Snap higher-ups, this version is meant to appeal to a more niche audience and "fashion-forward" creatives. They'll be packing some intriguing tech, though, at least more so than their predecessors, which can somewhat account for the steep jump in price. They include two cameras for the first time, for one, and they'll allow you to film 3D video that interprets environmental depth without any user input.

You can then take that video, upload it to Snapchat with the press of a button, and utilize Snapchat's wide variety of 3D effects straight from your phone. This 3D effect is much like what you can already do with normal photos taken from your phone, but in a much more dramatic manner. For example, a majestic, cartoon-like phoenix can appear in your environment while you're walking along (or riding a bike, in this example) and flit around you.

Like previous iterations, while you're recording, one camera on the glasses will be encircled by white blinking lights to notify others that you're filming (and to help protect their privacy).

You can also make 3D photos if you're not so interested in the glasses' AR capabilities as well as GIFs with depth simulation. They can be shared straight to Snapchat, as can your videos, but you can also upload them to the social media platform of your choice, such as Facebook or Twitter. There will also be a variety of different lenses to scroll through over time to keep things fresh for you as well as your followers.

Intriguingly, all photos and video from the glasses will be circular, at a resolution of 1642 x 1642 for images. Video is filmed at 60 fps with a resolution of 1216 x 1216, which is comparable to what you can get from an average smartphone, only now your footage will be spherical instead of rectangular. You should be able to get around 70 videos' worth of recordings with one charge, but the included charging case can juice up the glasses about four times before you need to charge it again. The glasses come with 4GB of onboard storage to file away all of your creative visions too, so you should have plenty of space to record everything you get up to.

Of course all tech aside, these are still sunglasses we're talking about too, so you can wear them as if they were regular eyewear, with standard tinted lenses meant to keep your eyes protected from the sun's harmful rays. At least they do seem to serve their most obvious purpose well. Right now, there are two different versions you can pre-order: Mineral, a pale beige pink, and Carbon, a matte black.

But the biggest question remains, who's buying the Spectacles? Who's been buying them? Are there enough interested parties for Snap Inc. to continue parading around new models year after year? You'd think that after the first outing with the original pair, the company wouldn't have tried two additional times. You see, they've never been anything of a "success" by any stretch of the word. In fact, Snap ended up writing off almost $40 million in costs associated with overproducing the first wave of the Spectacles, which seemed to herald the end for the product. The original glasses were sold in Snap-branded vending machines before making their way to an online marketplace, and only managed to pull 150,000 sales in their first year.

A Snap representative told TechCrunch in 2018 that, while it wouldn't reveal sales numbers for the original Spectacles, version 2 of the glasses were being used 40 percent more than the first iteration. Both prior versions were cheaper than the latest model, but that didn't help their use case or adoption rate.

So what's the answer? Given that the Spetacles weren't exactly lucrative at $150 (the original version was $130), they hardly seem as though they're worth it now either, even having been transformed into something of a "luxury" item for dedicated Snapchatters. But they do include an interesting set of tools that might appeal to a secondary set of users not originally forecasted: gamers who enjoy playing titles like Pokémon Go or Harry Potter: Wizards Unite!, as it's likely these specs could be used in the future to control similar AR-centric games. Perhaps this is where most of the interest will lie in the future: Spectacles to be used as a companion to AR titles — or evolving to become such.

If you're interested in picking up a pair even at the higher price (there are some admittedly cool features), you can look forward to Spectacles 3 debuting later this year. There's no exact date set for them just yet, but they'll be on their way just in time for the holidays, which as we all know is prime Snap time.