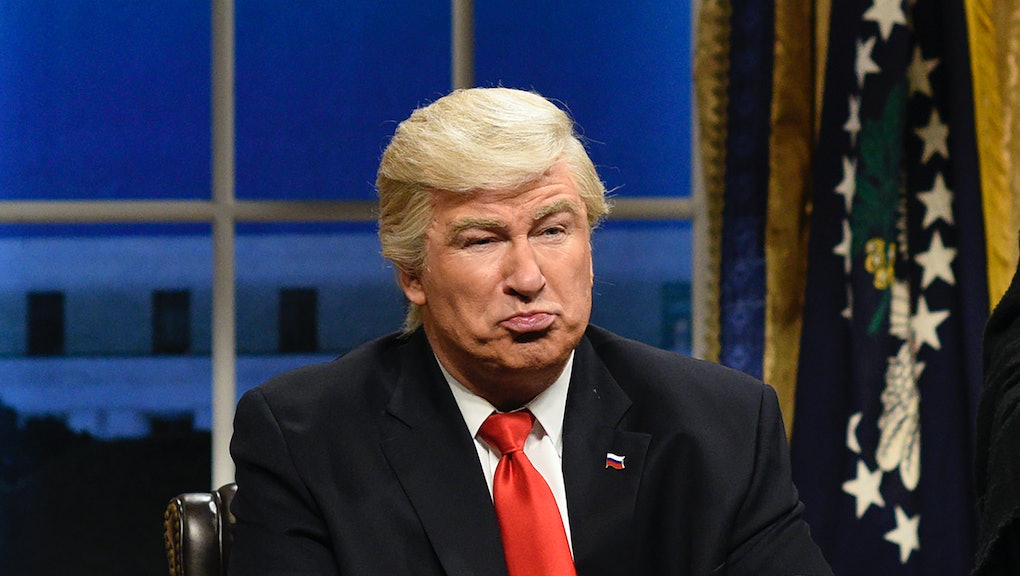 Throughout Tuesday night’s clattering, chaotic presidential debate, you might have noticed some tweets clamoring for the next episode of Saturday Night Live. The show, making its season debut this weekend to a limited-capacity studio audience, will undoubtedly take a stab at the debate, with Jim Carrey as Joe Biden and Alec Baldwin reprising his role as President Trump. While supporters of both candidates likely hoped for a meteor strike to end the debate last night, pining for SNL communicates a slightly more delusional worldview.

Some of our thickest minds in media and politics rallied around the idea that SNL is going to be great this week. Steering into the detached, politics-as-theater mindset that fuels our broken political system, these followed a similar playbook:

SNL should be fun. :) Can’t wait to see this again but even zanier. :) Remember when the president failed to condemn white supremacists again on national television? :)

Although major media outlets tried to reduce the debate to a both-sidesy stew of sparring, barbs, and insults — which wasn’t completely untrue, with Biden calling Trump a “clown,” the “worst president in American history,” and “Putin’s puppy” — it rather deliberately misses the forest for the trees. Rudeness and leaky-brained crosstalk are considerably different from empowering white supremacist militia groups, but a media apparatus so tailored to presenting a view from nowhere that alienates no one couldn’t acknowledge this.

Despite its caricatured, squinty, purse-lipped portrayal of the president, SNL is in no better position to reckon with this distinction. The Proud Boys heard the president’s message to “stand back and standby” loud and clear, lending the group a marketable slogan and making them an immediate household name if they weren’t already. Trump was given an opportunity to further spread mail-in voting conspiracies, which he ably ran with, and tacitly called on his militia boys to keep an eye on the polls in November. Where’s the punchline in all of this, exactly?

You can imagine how this might go, with Carrey’s Biden leaning into his elastic, Jokerized smiling reaction shots, the two shouting over each other while some recognizable actor standing in for Chris Wallace (it was Tom Hanks last time,) just throwing up his hands or hiding under the table. SNL’s been especially unequipped to confront tangible fascist threats in the past five years, by more or less reenacting the news with slight exaggerations. This is really all that can be expected of a major network sketch comedy series that infamously brought then-candidate Trump onboard to host in 2015, and has always been the playbook even before Trump. Its gaze is channeled directly through cheeto man bad liberalism as much as middle-ground political tourists, but it’s uniformly after a viewership that’s isolated from the most harmful elements of the administration.

Tuesday night further solidified our depressing gerontocracy, a failed state that punches left at every turn from both parties, with an unabated fascist and opposition party that refuses to engage beyond calling its latest instrument of harm a “very fine person.” This shouldn’t have been news to the horrified pundit class, which has breathlessly followed Trump’s every move in the past five years. While it was at first amusing to see the Uncut Gems cinematic universe graft itself onto a national debate stage, the room for cogent parody was always going to be crowded out by dread and despair. It’s easy to very sincerely feel sympathy for anyone tasked with mustering a coherent or amusing take on what transpired last night, but much harder for those who just want to unwind and have a laugh.

More like this
How late night TV marked the Derek Chauvin verdict
By Kara Weisenstein
'Exterminate All the Brutes' is a messy, ambitious documentary that ties together genocide, white supremacy, colonialism ... and Josh Hartnett?
By Nicholas Russell
'The Nevers' will be so much better when Joss Whedon has nothing to do with it
By Kara Weisenstein
Stay up to date