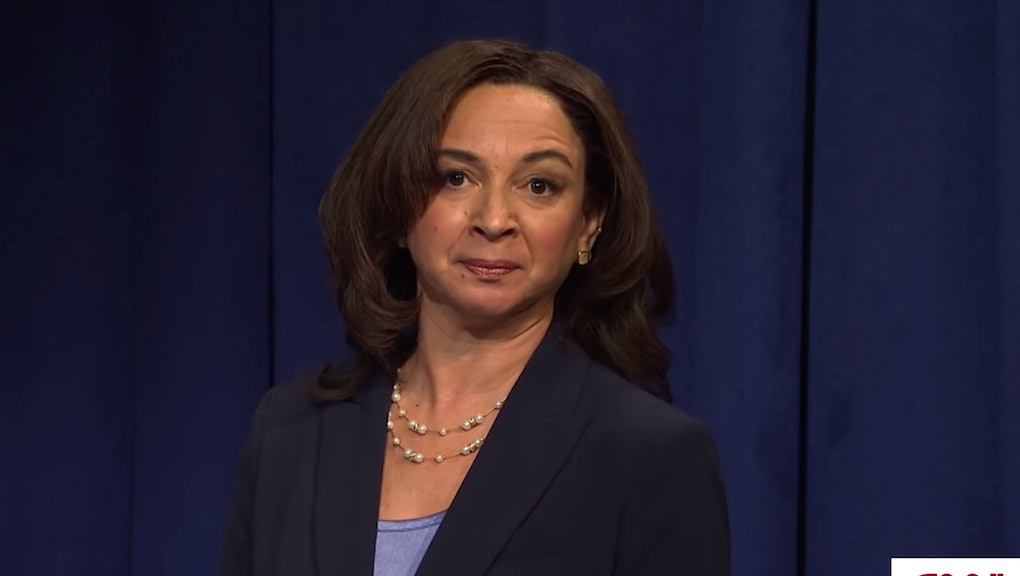 Maya Rudolph learned California Sen. Kamala Harris is Joe Biden’s vice president pick in real time with the rest of us yesterday, and she had a priceless reaction: “Oh sh*t,” she exclaimed. “That’s spicy.” Rudolph impersonated Harris three times on Saturday Night Live last season, to critical and fan acclaim. So with Harris officially on the ticket and SNL slated to come back sometime this fall (pandemic permitting), the comedy queen could be looking at a busy few months playing America’s “fun aunt,” or as Rudolph coined, our “funt.”

Rudolph happened to be on a video chat with Entertainment Weekly and a number of other Emmy nominees, including Ramy Youssef and Wanda Sykes, when the news broke. She’s nominated for three Emmys this year, including one for playing Harris on SNL. Fellow Emmy nominee Angela Bassett got word of Biden’s pick and shared it with the group, putting Rudolph on the spot. "Somebody's gonna be very busy now," Sykes teased, and Rudolph responded “Ruh-roh.” The actress noted she’d love to reprise her role as Harris on SNL, as long as it’s safe.

"I love going to the show. Any excuse I can get, I love. I just didn't really anticipate traveling during a pandemic, but if there's anyone that can work it out I'm sure Lorne [Michaels] has some sort of invisible helicopter that can get me there," Rudolph joked. "Ever since I was a kid, truly, I wanted to be on any kind of SCTV, Saturday Night Live, and I can't believe that I got to work there, and I can't believe that it's my family still," she added. "I'm so thrilled to even be associated with the show and that I got to go back. It's like the gift that keeps on giving. Honestly, it's my favorite place to play."

In case you’ve been avoiding politics news like it’s the coronavirus, presumptive Democratic presidential candidate Joe Biden announced Harris as his running mate yesterday. It’s a historic pick: she’s the first Black woman and the first Asian-American to run on a major-party ticket. Plus, Harris brings prosecutorial expertise and a patina of youth to Biden’s campaign. It’s bound to be a long few months, as Donald Trump slugs it out with Biden and his newly-minted running mate. But with Rudolph onboard to keep playing Harris, at least we can look forward to some levity prior to election day, too.