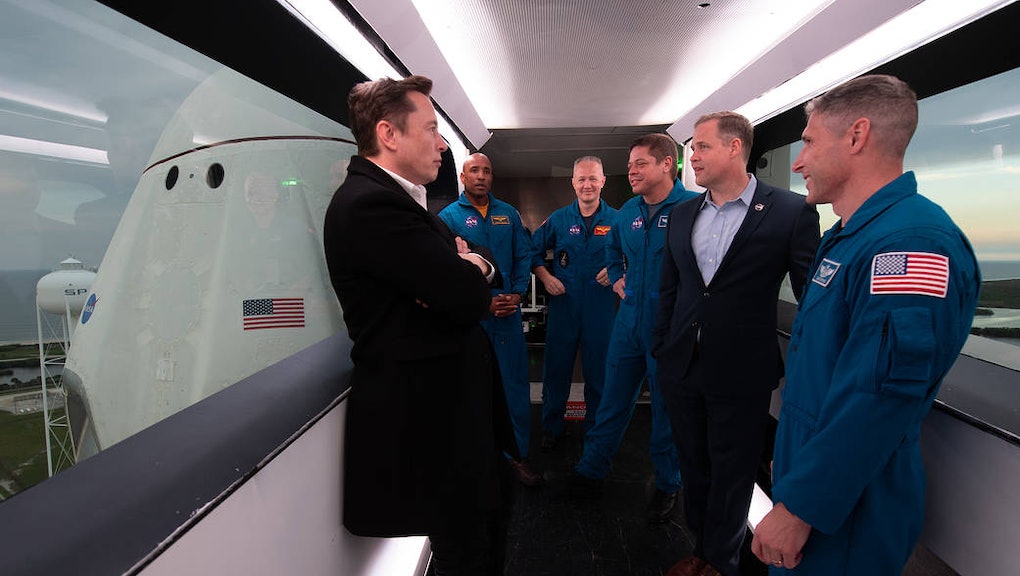 SpaceX is launching two people into space. Here's everything you need to know

SpaceX has been launching rockets since 2008, regularly setting new milestones for privately funded and developed space travel. On May 27, the company will face its biggest test yet: becoming the first private space transportation service to bring humans into orbit. It's a moment 18 years in the making for SpaceX, founded in 2002, and nearly a decade in the making for NASA, which hasn't had a crewed mission take off from United States soil since 2011. The historic event has high stakes and comes at a challenging time in the middle of a global pandemic but, if successful, could present a whole new world of possibilities for space travel.

SpaceX is attempting its first ever crewed rocket launch with NASA astronauts onboard. The mission, called Demo-2, will launch from the Kennedy Space Center in Merritt Island, Florida, and will deliver two astronauts to the International Space Station, orbiting 254 miles overhead.

When is the launch?

The launch is scheduled to take place at 4:33 pm Eastern Time on Wednesday, May 27. If for any reason the launch is delayed, back up launch times have been scheduled for Saturday, May 30 at 3:22 pm ET and Sunday, May 31 at 3:00 pm.

Why does it matter?

To SpaceX, the Demo-2 mission represents just about everything that the company has been working toward for nearly two decades. While it is technically still a test flight (hence the name Demo-2), it would be the first time that any private space transportation company delivers humans into orbit and to the International Space Station. It would validate SpaceX's systems for human-rated spaceflight, opening up new possibilities for the company. Not only could SpaceX continue to deliver humans to the ISS, but it also represents the first step toward long-duration missions, including missions to the moon.

For NASA, Demo-2 represents a chance to do domestic missions again. Since 2011, when NASA retired its Space Shuttle, the agency has been paying Russia for seats on its trips to the ISS. A partnership with SpaceX provides the opportunity for the agency to once again launch its astronauts from the US, and save money along the way. While Russia charges about $80 million per seat, SpaceX can do it for closer to $55 million. NASA has bet big on private space transportation operations, awarding multi-billion contracts to both SpaceX and Boeing to provide spacecraft capable of crewed flight. Demo-2 represents the first opportunity to see the return on that investment.

What do we know about the spacecraft?

Inside the Crew Dragon is a bit of modern reimagining of a spacecraft. SpaceX has opted to equip the craft with touch screen control systems, which work with SpaceX's custom space suits that allow the astronauts to interact with the screens with their gloves on. Glimpses inside the craft provided by SpaceX make it look something like being in the driver's seat of a futuristic car. There are, of course, more conventional conveniences as well, including a toilet complete with a privacy curtain.

The Crew Dragon will sit atop SpaceX’s flagship rocket, the Falcon 9. The reusable, two-stage rocket stands about 230 feet tall and can launch as much as 25 tons into low Earth orbit.

Who will be on board the spacecraft?

Two NASA astronauts, Doug Hurley, the mission commander, and Bob Behnken, the joint operations commander, will be on board for the mission. Both are members of NASA's astronaut class of 2000, and both have been involved in two prior space flights. Hurley was the pilot of the final Space Shuttle flight in 2011.

For this flight, Hurley will be in charge of the Crew Dragon's launch, landing, and recovery. Behnken will be tasked with reaching the ISS and docking with it.

How long will the mission last?

The launch itself will go relatively quickly. It takes just about 12 minutes for the Crew Dragon to reach its initial orbit. Then things slow down a bit. The craft is expected to reach the ISS at around 11:29 am ET on Thursday, May 28. At that point, it will dock with the station. Hatches will open at around 1:55 pm ET that same day, and the astronauts will enter the ISS.

The Crew Dragon will remain on board the ISS for between one to four months, depending on when the next ISS mission, Crew-1, is ready. That mission will also be led by SpaceX, and will be its official first operational mission. It is currently projected to launch sometime in late 2020.

What are the risks?

The biggest immediate obstacle for the Demo-2 mission is weather. According to a report from SpaceNews, the weather reports have been largely pessimistic in the lead-up to the launch. Over the weekend, the odds of acceptable weather conditions at the time of launch were as low as 40 percent. That has ticked up recently, with chances of reaching acceptable weather now closer to 60 percent. But there's no promise that positive trend continues, and the weather situation is very much in flux.

Even if the weather does manage to fall in line with what is required for launch, there are plenty of ways that conditions can adversely affect the mission. High winds could make it challenging to recover the rocket after launch and could complicate matters if, for whatever reason, the crew has to abort and escape the launch vehicle.

If something does go wrong during the launch, the Crew Dragon will use emergency thrusters to boost itself away from the Falcon 9 rocket. The craft would then open its parachutes and (ideally) drop into a designated recovery zone in the Atlantic Ocean.

There is a lingering concern about the Crew Dragon spacecraft itself, which experienced an explosion during a ground test at Cape Canaveral, Florida last year. An investigation into the explosion conducted by SpaceX and NASA found that a leak in the spacecraft's pressurization system allowed nitrogen tetroxide to come into contact with a titanium valve, which produced an explosive reaction that sent the craft up in flames. In response to the situation, SpaceX replaced the valves with burst disks that should seal completely and wipe out any risk of such a reaction occuring again.

And then there's the coronavirus aspect. The last thing that NASA wants to do is spread the disease that is already responsible for a global pandemic to space, too. Both astronauts on board have been in a pre-flight quarantine since May 13, and both claim to have been in isolation since about mid-March, according to CNBC. Quarantine is standard practice in the lead up to a mission, but extra precautions have been taken here. NASA has insisted on no direct interaction with the crew unless the appropriate protective gear is being worn. Part of the engineering staff has been working from home to enforce social distancing, and essential personnel have been required to wear masks and gloves.

Will the rocket come back?

SpaceX has managed to make waves with its ability to safely recover and even land rockets upright after take off, allowing them to be reused for future missions. That is once again the plan with the Demo-2 mission. The first stage of the Falcon 9 rocket will fall back to earth after launch, and SpaceX's drone ship, Of Course I Still Love You, will be waiting in the Atlantic Ocean to catch it. The rocket is expected to return to Earth about eight minutes after launch occurs.

How can I watch?

The launch will be broadcast live on NASA TV, the agency's free online broadcast network, as well as on SpaceX's website. Expect YouTube streams to crop up as well, including on NASA's official YouTube channel.

Broadcasts are expected to start around noon local time, well in advance of the scheduled 4:33 pm launch time. NASA TV is planning to provide continuous coverage straight through to when the Crew Dragon arrives and docks at the ISS, which is projected to occur at 11:29 am ET on Thursday, May 28.

Usually these types of launches draw a crowd in person, but NASA is advising against that due to the coronavirus pandemic. NASA has asked people interested in the launch to stay home and watch online or on TV.

If you live in Europe, you might be able to see the launch in a whole other way. It's projected that the rocket will be visible as it flies past the moon about 23 minutes after launch. Those living in the UK and in other parts of Europe may be able to spot the craft, which will likely appear as little more than a spot of light sprinting through the sky.