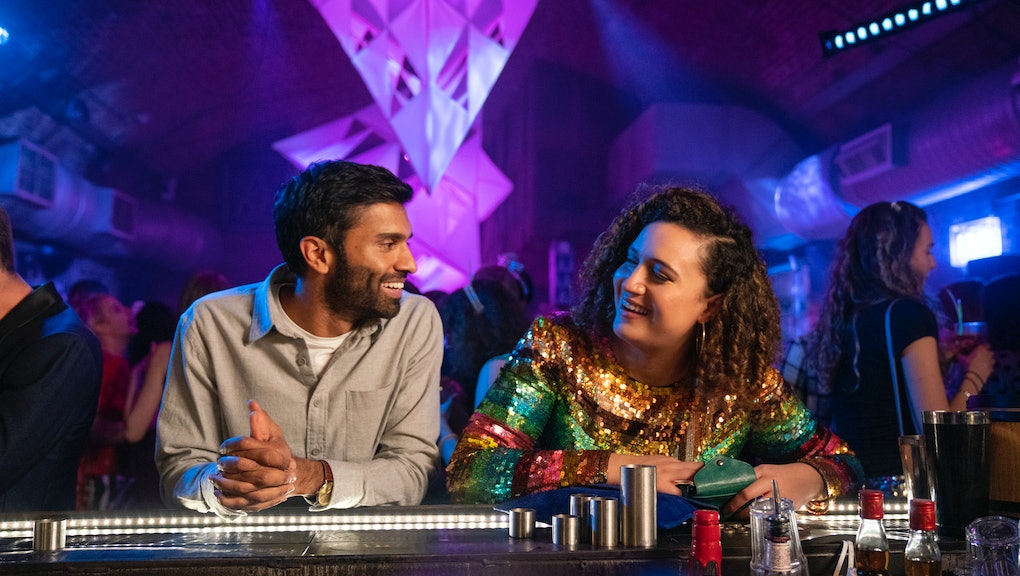 I went through a very humane yet depression-inducing mini heartbreak recently. No matter how much you intellectualize a failed potential romance — you said you were going to keep things casual; they fell for a friend and you were just a stranger from the apps; it was bad timing, which is how life goes sometimes — rejection is a bitter pill to swallow.

As I wallowed in the days after this person broke things off, I caught myself fantasizing they’d realize the error of their ways and show up at my door, flowers in hand, begging me for a second chance. I shut those thoughts down real fast: “Life isn’t a rom-com. It’s not going to happen.” When I told my therapist I felt stupid having these daydreams, however, she said letting my imagination run wild wasn’t necessarily a bad thing. The fantasy outcome probably won’t happen, but it’s a comforting temporary escape from the sadness (which always fades with time).

Similarly, romantic comedies can be some of the best medicine while you’re nursing a bruised heart. When I was 23 and got dumped by a casual hookup who thought it was odd I liked reading for pleasure (no comment), my best friend plunked me down on the couch and queued up Something’s Gotta Give. Self-soothing by watching When Harry Met Sally, which I’ve seen a trillion times, still feels like swaddling myself in a fuzzy blanket.

Lucky for me, an excellent rom-com (packaged as six 22-minute episodes) arrived stateside last week, just in time to pull me through the sads and start believing in love again. The premise of Starstruck, which first aired on BBC One in late April and is now on HBO Max, sounds a lot like fan fiction. Jessie (Rose Matafeo, who also co-wrote the series) is a 20-something from New Zealand living in London and juggling multiple dead-end jobs. On New Year’s Eve, she unknowingly has a one-night stand with famous British film star Tom Kapoor (Nikesh Patel). It’s material that’s been well-tread by other rom-coms, like Notting Hill and Roman Holiday. But the TV show structure of Starstruck, spanning a year of its characters’ lives, spins a delightfully unpredictable will-they-or-won’t-they tale.

One of the most entertaining things about Starstruck is that it leans into the awkwardness that’d undoubtedly manifest from a celebrity-normie romance. When Tom and Jessie hook up a second time and she sneaks out of his place the next morning, she gets accosted by paparazzi, but they quickly back off, assuming she’s just a cleaning lady. There’s an exchange between Tom and his overbearing agent Cath (Minnie Driver) where she tells him he can’t date “civilians.”

“I should fire you,” Tom replies. “You can’t call people civilians.”

“Oh, you’re not going to fire me. I Star Is Born-ed you,” Cath quips, then explains her logic: “To you, that’s what they are. These girls know lots more about you than you know about them. It’s not normal. All I’m saying is, there’s a reason actors date other actors. It’s just easier.”

Cath is right about most of the “civilians” we see Tom encounter. Jessie’s friends, for example, have zero chill when he’s around. Her flatmate Kate (Emma Sidi) is particularly awkward, and it’s hilarious watching her behave like an alien whenever Tom turns up. Their anxious, almost-slapstick energy reminded me of some of my favorite parts of Notting Hill: the antics of Hugh Grant’s wild roommate Spike and the dinner party scene where everyone is incredibly starstruck but desperately trying to act normal.

Even after she realizes he's a celebrity, Jessie is pretty much the only person who isn’t starstruck by Tom — which is one reason why Starstruck is genius and also probably the foundation of its main couple’s compatibility. She doesn’t treat him like he’s anything special for being an actor and calls him out when he’s a jerk. (From the cleaning lady incident to a mishap where Jessie gets stuck in Tom’s hotel bathroom for several hours, he gets her into some demeaning situations.)

Despite all the reasons Tom and Jessie shouldn’t work, they keep being drawn back together, whether by fate or feelings or both. This is obviously rom-com magic at work, spinning intrigue and entertainment out of improbable happy accidents and grand gestures. But also, Jessie and Tom have incredible natural chemistry, and it’s so fun to watch a romance unfold between people who seem made for each other.

Patel is quite attractive and plays Tom with genuine depth, but the main attraction of Starstruck is Matafeo, who exudes star power. The up-and-coming Kiwi comedian joins a formidable league of women that includes Phoebe Waller-Bridge, Issa Rae and Mae Martin, who each created and starred in their own irreverent series. Matafeo’s 2020 stand-up special, Horndog, is also on HBO Max. The stage version won the top prize at the Edinburgh Fringe Festival the year after Hannah Gadsby did the same with Nanette (which then went to Netflix and won an Emmy).

Starstruck is some of the best television I’ve seen lately and definitely the best rom-com I’ve watched in years — probably because its creator has a real passion for them. “There are so many ways to engage with and relate to a rom-com, even though it’s a genre that a lot of people diminish — in an annoyingly disgusting gendered way,” Matafeo told W magazine recently. Lucky for us, the rising star decided to manifest the rom-com of her dreams. “I wanted to write something nice that makes people feel nice, and from a female perspective,” she said. “It’s nice to make an updated version of that that still honors rom-com traditions in a loving way.”

Reframing the genre this way — as a pleasure but not a guilty one — feels liberating. Rom-coms don't generally mirror realistic relationships (for example, the odds of a movie star falling in love with me are not high), and that's kind of the point. They offer escapism when things don't work out in your favor and life feels grim.

As predicted, my ego has mostly rebounded in the week-and-change since I got kicked to the curb. Time heals all wounds or whatever. But other things helped alleviate the sting of rejection and disappointment, too. For one thing, I spent a long weekend with some of my oldest, dearest friends, and there's no better medicine than the support of your girls. For another, I distracted myself with Starstruck, which turned out to be both feel-good entertainment and awards-worthy television. Perhaps more profoundly, it was also a gentle reminder to not let my heart become calloused.