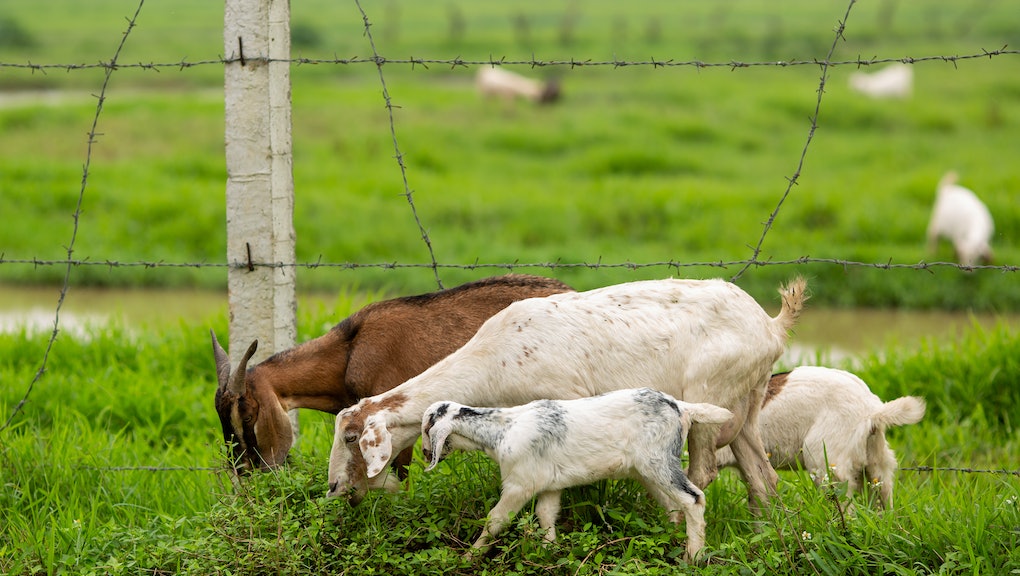 'Super Daddy' animals with genetically modified balls could save humanity

Livestock plays a key and paradoxical role in humanity's chances of surviving climate change. Maintaining livestock as a source of food and materials for essentials like clothing as well as providing income is necessary. But that same livestock is also responsible for a significant amount of carbon emissions that contribute to global warming. Scientists now think they have a solution to the problem: creating "Super Daddy" animals capable of carrying the semen of other animals with better, more productive, more resistant genetics.

You know the Virgin vs. Chad meme? That might be the best way to think of this new approach to selective breeding, which was recently laid out in a study published in the journal Proceedings of the National Academy of Sciences. Your standard, run of the mill livestock animals? Those are the Virgin. They get the job done currently but will struggle as the planet continues to change. This is particularly true in developing nations that may already have unfavorable climates. In those areas, the livestock has been described by Steve Kemp, Ph.D., a professor at the University of Edinburgh, as being “selected to stay alive ... but not much else," according to a report from Future Human.

Those areas need their Chad livestock. Animals that produce more meat, and also have a better chance of surviving some of the climatic changes that come as the planet's temperature continues to rise. Future Human pointed to the Nelore cattle breed as an example of this. The species is often overlooked in the United States in favor of the Aberdeen Angus, a muscley cow that produces lots of meat. But the Angus can't survive in hotter climates. The Nelore can, as it is largely unfazed by hot temperatures and is resistant to insects. To get the best of both worlds, scientists believe they can genetically modify the Nelore, give it the semen of the Angus, and cross-breed a super cattle that has the beefy body of the Angus and the climate-adaptive conditioning of the Nelore.

To create these surrogate breeders of better livestock, which researchers have dubbed "Super Daddys," presumably with the intent to make everyone as uncomfortable as possible, requires a two-step process. The first is using CRISPR, a powerful gene-editing tool. With it, scientists can create sterile male livestock. While that seems counterintuitive, it enables the second step: taking the stem cells of other animals and implanting them into the testicles of the sterilized ones. This enables that animal to go out and breed with the genetics of a different male, spreading the DNA of the preferred species.

This process might turn out to be essential to the survival of humanity as the planet continues to be ravaged by climate change. The United Nations' Food and Agriculture Organization found that 60 percent of agricultural lands worldwide already can't sustain crop production, and it's projected that usable land will continue to shrink. A report from the UN published last summer warned that land suitable for crops is expected to shrink thanks to increasing heat, droughts, floods, and deforestation.

Where crops can't survive, livestock can — or at least they have a better shot at it. That's not to say that livestock is a climate change-proof solution, as climate-related disasters caused a 36 percent drop in livestock productivity globally from 2006 to 2016. But better livestock, bred to survive the changing conditions of the planet and thrive in areas where alternatives aren't viable, could be key to sustaining the planet's growing population. And while selective breeding won't solve the issue of carbon from things like cow burps, the process has been used to successfully shrink the overall carbon production from cattle.

More efficient livestock built for the changing climate could save us, and if the cost is calling them Super Daddys, that's just the price we're going to have to pay.

More like this
How regenerative agriculture could sustain humanity — and Earth
By Vanessa Taylor
Biden's pledges aren't enough to avoid the worst effects of climate change, new study says
By AJ Dellinger
7 climate podcasts to help you make sense of the future
By AJ Dellinger
Stay up to date