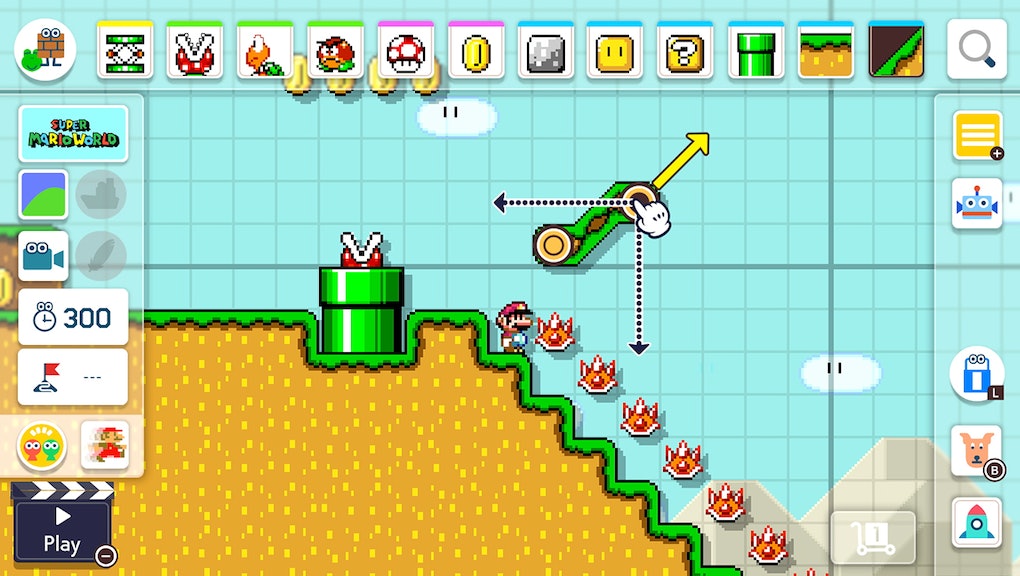 If you've ever wanted to create your own Mario levels, Nintendo has the perfect game for you. 'Super Mario Maker 2', a new Nintendo Switch game coming later this year, will not only let you build your own levels from scratch and play through them on your console, but enjoy them with friends and share them with other Mario fanatics around the world. Just don't forget about poor old Luigi.

What is Super Mario Maker 2?

Now that Nintendo is focusing its efforts on the Nintendo Switch, the sequel is going to get a massive update in the form of new content, new tools to build levels with, and a performance upgrade given that it's on the more powerful Switch console. In a nutshell, it's a fun way to get involved and make your own challenging Mario levels, which is probably something we've all wished we could do at some point.

There's so much coming to Super Mario Maker 2 it'll make your head spin like a Koopa Troopa's turtle shell. There's a wide variety of new course parts, tools, and additional features you can use to make your own Mario levels. Whether you just want to make a few death-defying jumps friends have to make to conquer your level or you're trying to make a boss battle gauntlet with some of Mario's toughest enemies, you can do all of that in-game.

For starters, you can now make angled surfaces and slopes by choosing a direction and setting the length. These will make Mario (or whichever character you use) slide downward, making jumps harder to pull off. If you've played a Mario game, you've likely dealt with slopes before — and cursed them every time they got you killed by a wayward enemy.

The angry sun that follows Mario around in Super Mario Bros. 3 is available as an enemy in the game, which you can use as you see fit. So if you want to make that mean old sun dive down into Mario and try to kill him in your own levels, you can simply place him wherever you want. Just try not to be too evil with him.

On/Off Switches are available in-game to place wherever you'd like, with the ability to swap all red and blue blocks you place in a course, meaning you can set up some seriously wicked puzzles. Pair these with new red versions of Bullet Bill enemies known as Banzai Bills, which will chase Mario around the level, and you've got the ingredients for some dastardly levels that just might drive you and your friends crazy.

There's a wide selection of new course themes, including Desert, Forest, Snow, and Sky motifs, all with their own new music by Mario composer Koji Kondo. The Moon course can even be used to unlock night versions of existing levels. Depending on which theme you use and whether you use the day or night versions, you may see courses transform entirely.

In addition to these new goodies, you get all of the old tools and set pieces you could use from the original games to bring your vision of a Mario level to life, with items pulled from Super Mario Bros., Super Mario Bros. 3, Super Mario World, New Super Mario Bros. U, and Super Mario 3D World, which is new to the game. This means you can use Cat Mario (yes, Mario in a cat suit), the Koopa Troopa Car to race through levels at your leisure, and even a bizarre Piranha Creeper, which can follow a path drawn by the player.

In a nutshell, there's a dizzying amount of new stuff in this sequel that you'll want to look out for. It's jam-packed with Mario-centric content new and old players can appreciate.

Are there solo and multiplayer modes?

Yes! There's a single-player Story Mode that you can actually play entirely offline and on your own if you choose this time around. Mario is working to rebuild Princess Peach's castle (again) and needs coins to fund his reconstruction efforts. To earn cash, he's got to accept special jobs from a bulletin board in the Mushroom Kingdom and complete the courses created around them. There are over 100 special levels created by Nintendo to complete in Story Mode before you branch out and start making your own.

If you'd like to play with others, you can play the game's multiplayer mode with four players: Mario, Luigi, Toad, or Toadette. Multiplayer Versus mode has everyone competing against each other in a side-scrolling showdown, while Multiplayer Co-Op lets friends play together online or locally to conquer a course. If one player completes it, credit is given to everyone.

When you make the best level you can, you can share it online with other players by way of the Course World, which is available to anyone with a paid Nintendo Switch Online subscription ($19.99 a year). It will feature all the courses others have uploaded and you can browse through to find your favorite to try out.

It can sort by Popular Courses, New Courses, or player-added tags. When you download a level, you can play it anytime, including offline. You can even unlock special items by completing other levels, so it pays to try and best what others have made.

When is Super Mario Maker 2 going to be available?

Super Mario Maker 2 is launching on June 28 as a Nintendo Switch exclusive. But if you can't wait, you can always bust out the Wii U or Nintendo 3DS original to see what you can create with that to get some practice in. The competition is going to be fierce.