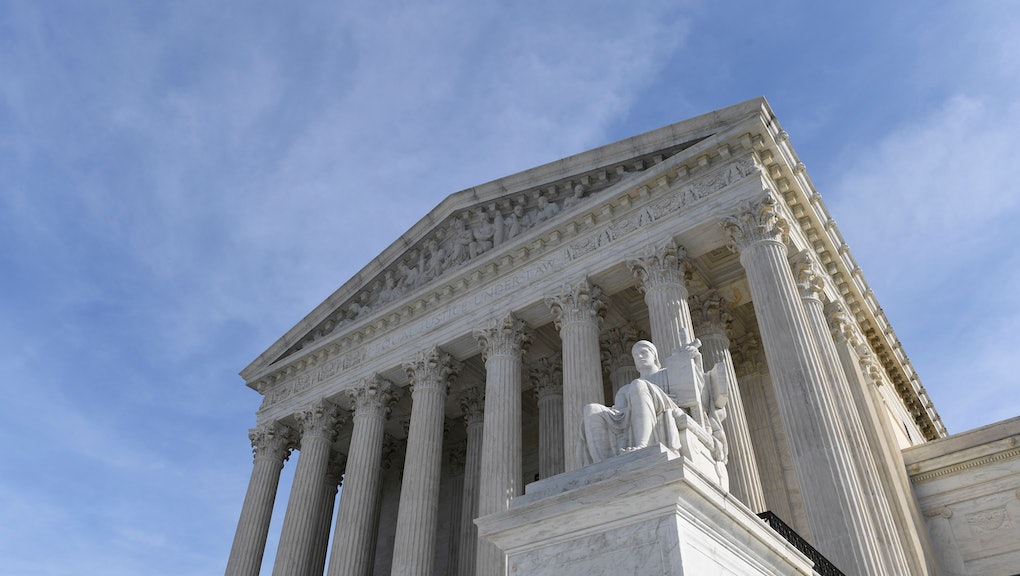 For years, advocates have battled the Trump administration's attempts to end the Deferred Action for Child Arrivals (DACA) program, and now the fight is nearing its peak. On Tuesday, the Supreme Court will hear arguments about DACA to determine whether the program's implementation was unconstitutional, as President Trump has claimed. Although their decision isn't expected until 2020, the justices' ruling in the case will impact thousands of immigrants across the country. Here's what you need to know.

How did DACA end up before the Supreme Court?

Trump announced his intentions to terminate DACA, which shields young immigrants from deportation, in September 2017. His reasoning was that President Barack Obama, who began the program in 2012 by executive order, did not have the proper authority to do so.

"In referencing the idea of creating new immigration rules unilaterally, President Obama admitted that 'I can’t just do these things by myself' — and yet that is exactly what he did, making an end-run around Congress and violating the core tenets that sustain our republic," Trump wrote in the official White House statement announcing his decision. He went on to call the program "unconstitutional" and said it could not be defended in court.

Trump's assertion that DACA is "unconstitutional" is part of why the legal fight has gone on for so long. As The New York Times noted, if Trump just said he was cancelling DACA as a matter of policy, courts would likely have protected his decision as a "routine exercise of executive discretion."

However, Trump's argument that DACA was unlawful meant undoing it became a legal matter rather than a policy matter. Since Trump's announcement, lower courts have kept the program going — and now the Supreme Court will hear three consolidated cases to make a final ruling on the program.

How does DACA work?

In 2012, Obama created DACA to protect DREAMers, or unauthorized immigrants brought to the U.S. as children. Unlike the proposed and stalled DREAM act, DACA doesn't provide a pathway to citizenship. Instead, it offers a temporary protected status that shields immigrants from the risks of deportation and allows them to work.

Protection under DACA lasts for two years but is renewable. Currently, about 700,000 people are enrolled in the program. In October, DACA recipients filed a historic amicus brief with the Supreme Court, releasing a series of videos depicting the lives of 27 people within the program to inject a human element into the legal fight.

“[DACA] has created life-changing opportunities for hundreds of thousands of promising young people. DACA has allowed them to lead fuller and more vibrant lives, including by seizing opportunities to advance their education, furthering their careers, providing critical help to their families, and giving back to their communities," the amicus brief, compiled by United We Dream, said. “Able to make use of the basic building blocks of a productive life — a Social Security number, work authorization, or driver’s license, for example — DACA recipients have thrived.”

How is the Supreme Court expected to vote on DACA? What happens if the program is terminated?

Right now, there are three ways the Supreme Court can go. It could affirm the decisions of lower courts, meaning that DACA carries on, or it could say that the Trump administration can in fact eliminate the program.

It could also rule that DACA itself is unlawful. If that were to happen, as outlined by Vox, the Supreme Court would not only end DACA today, but ensure that no other president could reinstate the program. The decision could thus make people enrolled in DACA immediately eligible for deportation, rather than waiting for their status to expire.

The case only ended up in front of the high court because Trump framed the law as unconstitutional, rather than simply at odds with his policy goals. Given that the president has attacked both legal and illegal immigration by pouring millions of dollars into ICE, delaying refugee resettlement, and making it more difficult for immigrants to gain visas, it's likely that the administration will try to target DACA another way if the Supreme Court does not rule in its favor.

If the program ends, hundreds of thousands of immigrants will be left vulnerable to deportation. Their families will be impacted, too, as FiveThirtyEight noted that many DACA recipients have relatives who rely on them. If the Supreme Court decides to end DACA, the effects will reverberate across the United States.