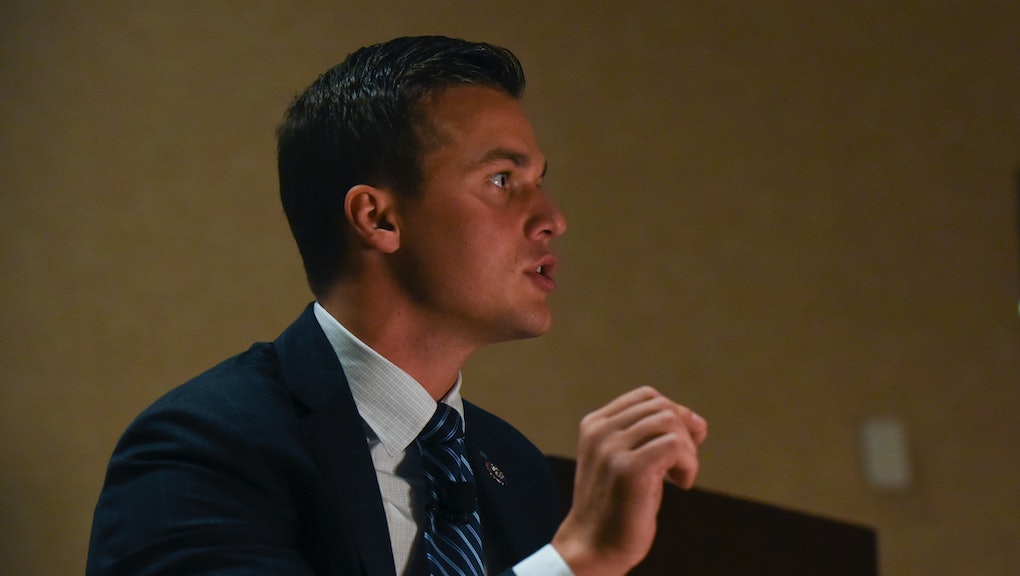 What can you say about North Carolina Republican Rep. Madison Cawthorn? That he's a habitual fabricator? An apparent bigot? An armed seditionist? Yes to all of the above. But now it seems we can add a new, ghoulish entry into his ignominious collection of terrible descriptors: a guy who brings a weapon to school.

According to photographs taken this week by Jay Carey, a Democrat running to replace Cawthorn in North Carolina's 11th District, Cawthorn appeared to have a sheathed tactical blade affixed to his wheelchair while speaking against masking in local public schools at a school board meeting in Henderson County on Monday evening.

That Cawthorn is a weapons ... "enthusiast" is hardly anything new; he's claimed he was packing heat during the Jan. 6 insurrection attempt, and this past winter he was busted for "accidentally" trying to bring a gun and loaded magazine onto a flight. And, like his airplane snafu, it turns out bringing a blade to a school board meeting — and just a school, in general — is extremely illegal. As the non-profit Fire Madison group pointed out in a press release sent shortly after Carey shared the photos, carrying any sort of bladed weapon on "educational property" is a Class 1 misdemeanor in North Carolina, regardless of whether the weapon is concealed or out in the open.

According to the Asheville Citizen-Times, the handle seen in Carey's photos matches that of a Microtech "SBD" model of knife. "Daggers are typically designed to be used as a thrusting or stabbing weapon," Microtech writes on its website. "But the SBD includes a wider blade with extremely sharp edges that can be used for more utilitarian functions." What those functions could be in the context of a school board meeting are unclear.

"Armed criminals — even if they're members of Congress — must not be allowed to endanger our airports and schools," Wheeler concluded.

Asked about the blade seemingly affixed to the back of his wheelchair, Cawthorn said, "I don't really know anything about that."

"I'll have to look into it, but I don't know anything about it," he reiterated.

According to the Charlotte Observer, at least one member of the Henderson County School Board has reported Cawthorn to the local sheriff's office. The school board also voted to maintain the mask mandate Cawthorn spoke out against, 6-1.

More like this
Of course Amy Coney Barrett claimed SCOTUS isn't partisan
By Rafi Schwartz
The big takeaway from the California recall debacle is that some pundits should shut up forever
By Rafi Schwartz
Watch Virginia's infamous Robert E. Lee statue finally come down
By Rafi Schwartz
Stay up to date