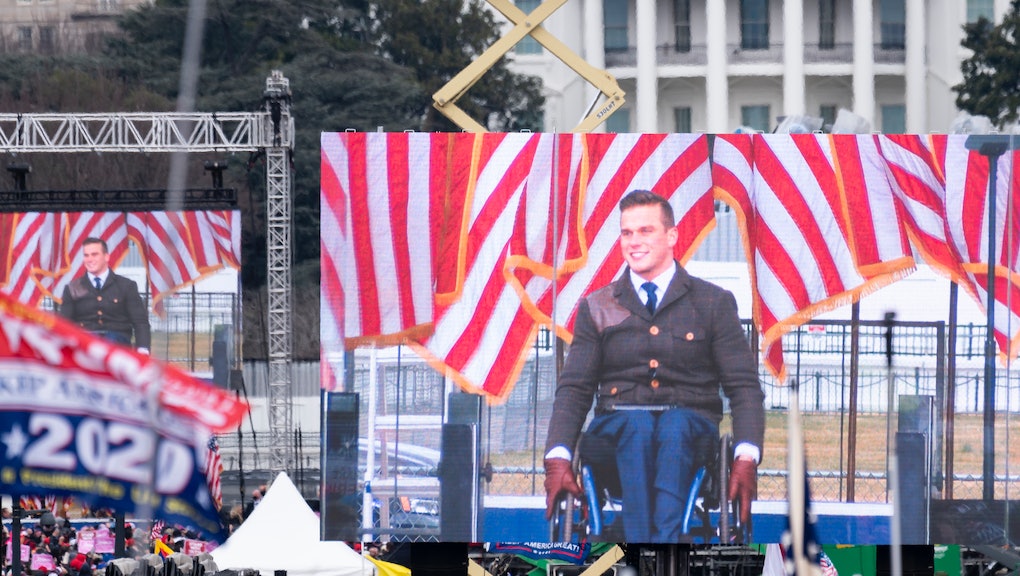 Madison Cawthorn has been a congressman for 9 days. People already want him expelled

After last week's siege on the Capitol, fomented by President Trump and carried out by his white supremacist supporters, most lawmakers on both sides of the aisle have spent the last few days offering platitudes and declarative statements about how America is better than a violent attack on the seat of government. But most lawmakers are not freshman Rep. Madison Cawthorn (R-N.C.), who encouraged supporters to "lightly threaten" their lawmakers just weeks before the insurrection at the Capitol.

Cawthorn, who infamously referred to his visit to Adolf Hitler's vacation home as an accomplishment off of his "bucket list," was among the Republican legislators who voted to overturn the election results even after they were forced to hide from the terrorist mob Wednesday. But that vote doesn't even begin to encompass what happened earlier in the day, when Cawthorn helped to rile up the crowd attending Trump's "Stop the Steal" speech, referring to his fellow legislators as "cowards" and leading the crowd in a "U-S-A!" chant. Later that day, the 25-year-old representative tweeted, "I'm fighting a battle for our Constitution on the House floor with other patriots. The battle is on the House floor, not in the streets of D.C."

But perhaps most alarming are comments from a Dec. 21 speech that have recently come to light. Speaking at an event for far-right organization Turning Point USA, Cawthorn encouraged people to be aggressive toward their representatives. "Call your congressman and feel free, you can lightly threaten them and say, you know what, if you don't start supporting election integrity, I’m coming after you, Madison Cawthorn is coming after you, everybody’s coming after you," Cawthorn said, per The Citizen Times, a newspaper based in Asheville, North Carolina.

While Cawthorn seems to have abandoned his previous stance that the general election was "stolen," having changed his political ads from the Trump-aligned "stop the steal" refrain to "GOP audit," those surrounding him say that he should resign or be removed from office. A former sheriff in North Carolina's Henderson's County, who was slated to be Cawthorn's district director, said that he would no longer be joining Cawthorn's team. Per Blue Ridge Public Radio, George Erwin Jr. is urging other police to reconsider their support of Cawthorn as well.

Other government officials in Cawthorn's home state are asking that he step down as well. "It’s time for Congressman Cawthorn to resign," a Citizen Times op-ed penned by Buncombe County Commissioner Jasmine Beach-Ferrara read. Buncome County is home to Asheville and is part of Cawthorn's district. "If he does not resign, he should be removed from office because he has violated his oath of office." Cawthorn was sworn in less than two weeks ago, on Jan. 3.

A delegation of Democrats from Cawthorn's home state also wrote to House Speaker Nancy Pelosi (D-Calif.) urging her to call for Cawthorn's expulsion, on the grounds he helped incite the riot at the Capitol. The letter read: "[Cawthorn] has repeatedly denied any culpability in the resulting mob action of illegally breaching the security of the Capitol Building, of illegally taking over the U.S. Senate and House of Representatives chambers, of the disruption of Congress's carrying out its official constitutional duties, of destruction of federal property, and of inciting mob action resulting in the deaths of five people."

The calls for removal and expulsion of Republican legislators who incited the riot, from people like Cawthorn who spoke at Trump's rally to senators like Texas's Ted Cruz and Missouri's Josh Hawley, who backed Trump's fraudulent attempt to discredit the election results, have gained steam since the failed coup. Still, it's unlikely they'll come to fruition. As it stands, lawmakers are grappling with a newly introduced article of impeachment against Trump, an inauguration with suddenly pressing security questions, and the coming confirmation hearings of President-elect Joe Biden's Cabinet.