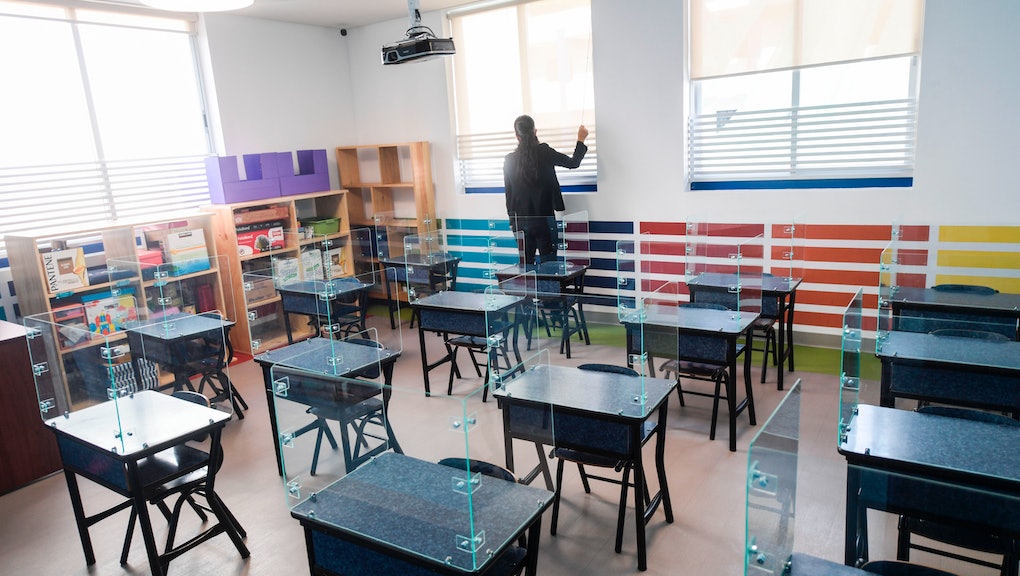 Even before coronavirus hit the United States, America has demanded far too much from its underpaid, overworked teachers. They are educators, yes, but at any given moment they are also expected to be babysitters, disciplinarians, chefs, social workers, crisis managers, and whatever other pressing role needs filling both inside and out of the classroom.

Then came the pandemic, and with it the waves of school closures and well-intentioned attempts to replicate the normal educational experience by planting both students and teachers in front of a computer and basically telling them all to figure it out. Suffice it to say, it has not been a smashing success.

So now, despite skyrocketing COVID-19 cases in states across the country, and the Trump administration's utter failure to stem the tide of a first pandemic wave — to say nothing of bracing for a second one — the president, along with his White House enablers and national network of Republican cronies, is pushing extremely, even fanatically hard, to force public schools to reopen this coming fall, health concerns be damned.

It is in this dangerous push to force teachers and students back into the infectious classroom that educators in several of states hit hardest by the pandemic have begun contemplating — and preparing for — their own mortality ahead of the coming school year.

Earlier this month, the Houston Independent School District offered an ominous suggestion for local teachers to participate in a webinar on estate planning where they could "learn how to create a will, a trust, and much more!"

"I actually thought offering teachers guidance on how to prepare a will was the humane thing for the district to do," Houston Federation of Teachers union president Zeph Capo, himself a public school teacher, told Texas Monthly. "The district was going the extra step to help people get prepared for serious problems. This is the reality that we’re facing."

Teachers across the country are grappling with the fact that going back to school and doing their job implicitly means risking their health.

"How are we in the middle of a pandemic, and I'm going into this germ factory, and we don't have a will?" first grade teacher Amy Forehand told CNN, on the condition the outlet not share the name or location of her school.

"It's probably time that I have something in place," another teacher told CNN. "There's nothing like a pandemic to make you do all that."

In Florida, local St. Petersburg law firm Gallagher & Associates has even offered pro-bono legal consultation for teachers interested in preparing a living will ahead of the coming school year.

"While we agree with medical experts that it is premature to reopen schools in this Tampa Bay hot zone, we want to do our part to help teachers that are forced to return," the firm wrote on its Facebook page.

The response has apparently been significant enough that the firm added a comment to its post shortly thereafter: "In response to those who have inquired if we can assist teachers outside of Florida, unfortunately we cannot."

This is not, of course, the first time America's teachers have been forced to contemplate — and indeed accept — their own mortality ahead of returning to the classroom. Educators are already expected to protect students in case of a school shootings or other instances of violence; a popular solution in conservative circles to the scourge of gun violence in schools was to arm teachers with weapons, too. That these people now have to add wondering if they'll be infected with a deadly virus on top of everything else is just further proof of how undervalued and overextended the nation's educators truly are.

More like this
West Virginia is offering guns to incentivize people to get vaccinated
By Rafi Schwartz
"Our society is really totally nuts": Newly revealed emails show how Fauci really felt during the pandemic
By Rafi Schwartz
Here's a chilling peek into just how close Trump got to running a police state
By Rafi Schwartz
Stay up to date