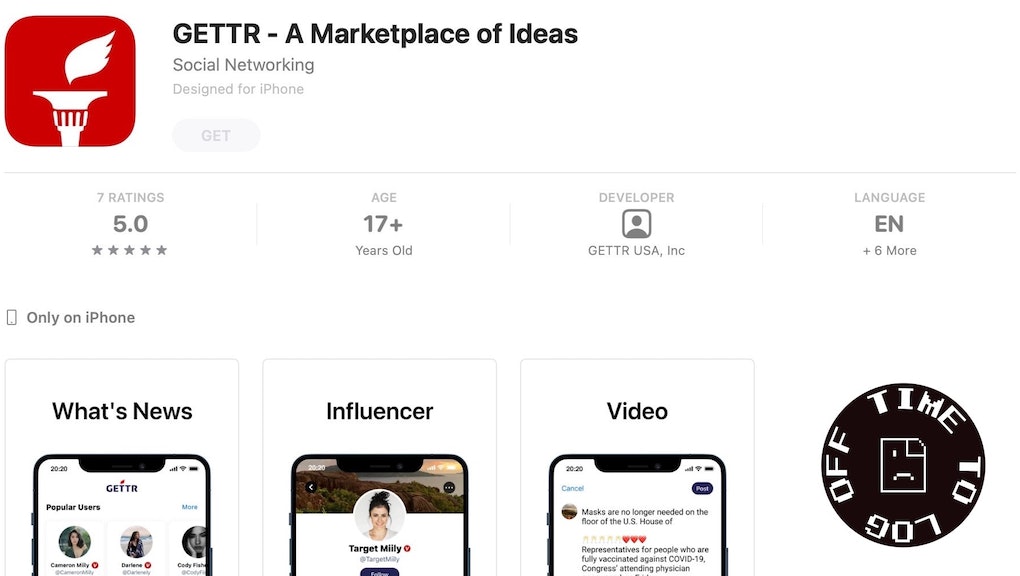 Another day, another doomed social media venture from former President Donald Trump and his orbiting solar system of flying monkeys. After ignominiously shelving his pathetic, Tumblr-esque "From the Desk Of" blog, the MAGA braintrust this week unveiled "GETTR" — a new social media app which proclaims itself "a marketplace of ideas."

Suffice it to say, those "ideas" are all extremely stupid, which makes sense when you consider the extremely high-powered thinkers behind it. (Namely: Donald "Why does it take 15 tries for me to flush a toilet?" Trump, and his perpetually scandal prone former spokesman Jason Miller).

Please, take my hand and come along for this digital romp through the gates of MAGA hell. Where to begin ... Oh, how about this logo, folks?

I'm guessing this is supposed to be the torch at the top of the Statue of Liberty, or some weird ultra-right wing bit of Roman fetishizing or something, but honestly all this logo is doing is reminding me that the Olympics are coming up.

Oh, and can we take a moment to talk about the name, too? "GETTR"? What? Like "GETTR Done?" Or is it "GETTR" by the, well, you know? What, exactly, am I GETT-ing here? A horrible computer virus? As far as I can tell there's nothing on the app store called "GRFTR" which seems more appropriate. A real opportunity missed, you dummies.

Anyway ... Let's check out the app's official description shall we?

GETTR is a non-bias social network for people all over the world. GETTR tried the best to provide best software quality to the users, allow anyone to express their opinion freely.

Wow! What an inspiring collection of meaningless jargon! Really grabs your attention, what with its mangled grammar and failure to make any comprehensive point. And do the user reviews rise to the literary heights of the app's description text? Boy do they!

I usually really seldom go to a person application to leave a message, but this software is really very good, it enriches my social circle, it is a place to say the truth, no language censorship, so that I can speak freely and speak the truth out loud, highly recommended to download.

If anything screams "why, yes, I am a real human being with a normal human brain who is definitely not being paid or programmed to write this review," it's this single run-on sentence, published weeks before the app's initial launch date.

Hm, okay, discouraging. But at least GETTR has gotten some real flesh-and-blood users since then, hasn't it? Well, yes and no. Because while GETTR's poster child "popular user" is actually a Kazakhstani stock photo model ...

.... the blatant Twitter rip-off's official debut has inspired some of the country's most racist, inflammatory grifters to jump onboard.

In any case, that's all I'll say about GETTR for now. And no, of course I haven't actually downloaded the thing. Are you insane? You think I want an app built by Donald Trump sucking up all my personal info? No. If Donald Trump wanted to know more about me, he already missed his chance to do it the old fashioned way: using the federal government to spy on journalists.