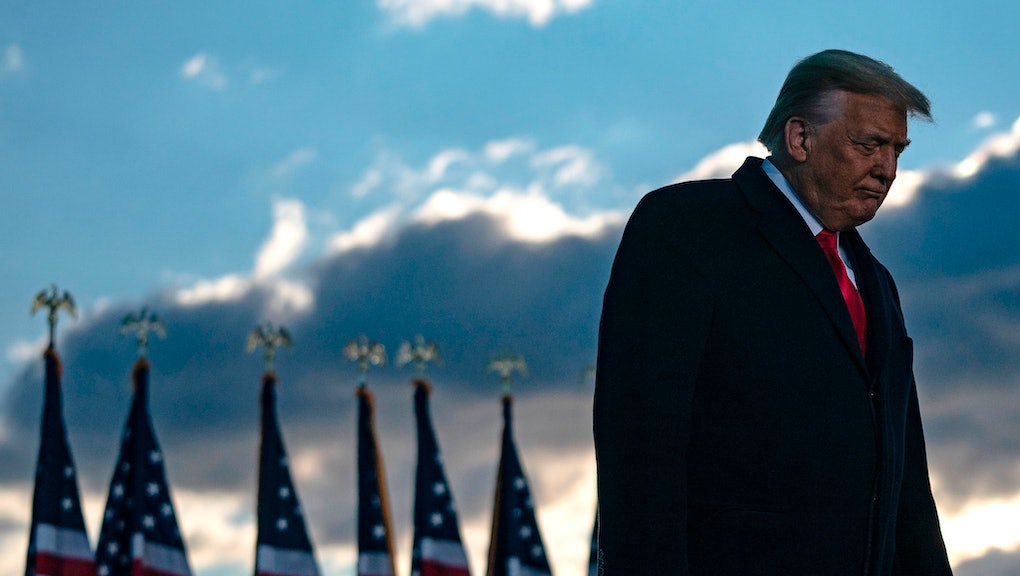 Donald Trump's blogging days are over

The grind of the media business has claimed yet another victim. Donald J. Trump, former president of the United States turned editor-in-chief of the blog "From the Desk of Donald J. Trump," has abandoned his publication, making him the latest victim of blogging burnout. The site, which launched less than a month ago, has been scrubbed entirely of Trump's ramblings. It now redirects to an "Alerts" page where prospective readers can subscribe to "exclusive" updates from Trump.

Trump launched his blog as a sort of social media replacement after it became obvious that the former president would not be allowed to return to Twitter or Facebook — the result of actively inciting and encouraging an attempted coup and riot inside the U.S. Capitol. After years of promising (read: threatening) to start his own social network, which by all accounts would just be a version of Twitter where Trump is the main character every single day, Trump's bans from mainstream social media finally gave him an excuse to follow through.

The result, "From the Desk of Donald J. Trump," was every bit as half-assed as you would expect from something with the Trump name slapped on it. It was something like a streamlined version of how he previously communicated with the public, using press releases that would get distributed by reporters on social media, mocked, and ignored. The blog looked like something that would be right at home in the internet of the mid-2000s, really only lacking a link to Trump's MySpace page. While the platform was filled with post after post of Trump's ramblings, offering his opinion on everything from the 2020 election (surprise: he insists that he won) to Kentucky Derby winning horse Medina Spirit (Trump called the horse, which failed a drug test, "a junky"). Each post was accompanied by a "like" button that was ostensibly there for supporters to provide feedback but, fittingly, didn't even work.

Despite big promises from Trump hypeman Jason Miller claiming that Trump would draw "tens of millions of people" to his platform, it appears that Trump was largely shouting into the void on his blog. According to a report from The Washington Post, Trump's blog was drawing less traffic than pet-adoption service Petfinder and recipe site Delish. Recode reported that mentions of Trump had dropped by 34% on Twitter and 23% on Facebook from January to May. A report from NBC News said that Trump's blog posts got shared just over 220,000 times over the course of its first week. By contrast, Kourtney Kardashian’s blog (which is a real thing, apparently!) gets about three times as many shares in a single day.

The lack of attention apparently weighed heavy on Trump's ego, resulting in him de-platforming himself. According to the Post, an unnamed adviser to Trump told report Josh Dawsey that the one-term president didn't like that his platform was being mocked and had very few readers (but hey, at least it didn't get killed by venture capitalists!).

Miller told CNBC that the site was "just auxiliary to the broader efforts we have and are working on," but provided no details about what would come next. If Trump would like to stay true to the industry trends, he should probably pivot to video (reminder that Trump previously had a vlog on YouTube that was absolutely wild), but maybe he'll settle for an offer to start blogging on Substack instead.

More like this
Congrats to GOP Rep. Mo Brooks for tweeting his own passwords out to 100k followers
By Rafi Schwartz
How Subtle Asian Traits made a generation of Asians feel understood on the internet
By Claire Wang
Uber offered its drivers help with health care, but of course it was a mistake
By AJ Dellinger
Stay up to date