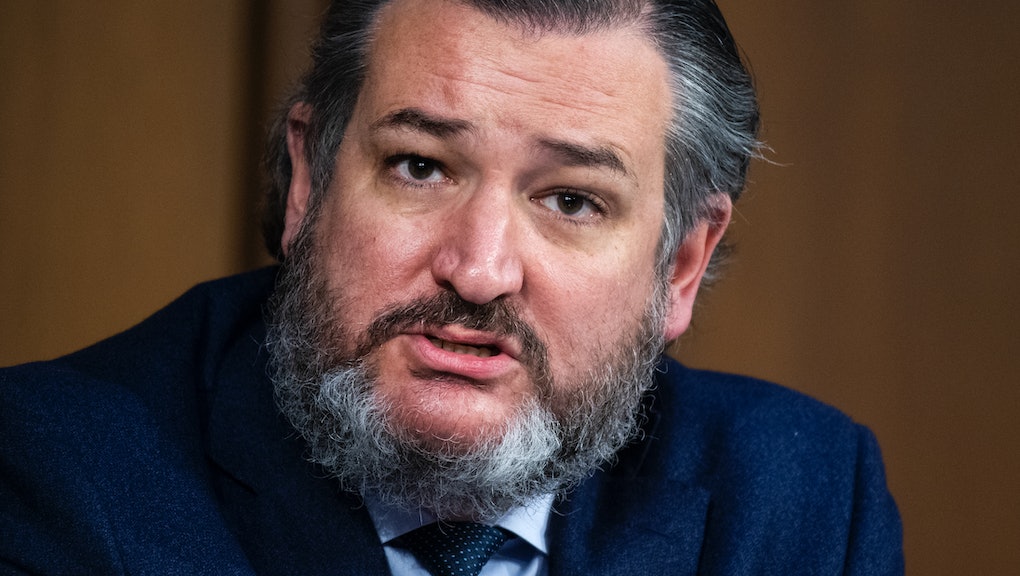 It's fairly well established that Ted Cruz is the most disliked member of the Senate by a wide, wide margin — not among voters, but by his own colleagues who "joke" about killing him, and sell merch bragging about how much they hate him. Nevertheless, like "fetch" and other ill-fated attempts at coolness, Cruz has somehow decided that the best thing he could do right now is to gin up some quick cash with his own overpriced fashion line.

Please, brace yourself for the unfurling horror that is "the Cruz Crew":

Let's take a closer look, shall we?

Where to begin with this cursed onion and its exponentially distressing layers? Let's start with the fact that it's a $30 tank top. And while I have nothing against tank tops as a basic genre of shirt, I feel like when it comes to anything having to do with Ted Cruz and exposed skin, less is emphatically more.

So let's talk about Ted. Specifically, his weird giant noggin, the indiscriminate rodent pelt (muskrat? nutria?) draped over it in an attempt to approximate something akin to a haircut. Here, for reference, is a recent pic of Ted's actual melon:

So sure, okay, there's some artistic license taking place on these shirts. That's fine. Ted did in fact once sport something like a bizarre "what if a mohawk and a mullet had a terrible child?" hairdo. Perhaps you remember seeing its slightly grown-out manifestation, that time Texas suffered a catastrophic winter storm and ol' Teddy decided to jet off to a resort in sunny Cancun because, as his wife explained in a series of brutal leaked group texts, their house was "“FREEZING."

Which brings me to the next execrable layer of this trifle from hell: the fact that once again, in the waning-but-still-very-much-not-over days of our global pandemic, Cruz is literally trying to make money off spring break and the type of happy-go-lucky infectious vacation that has already prompted an official "state of emergency" declaration in one city and likely contributed to a recent uptick in COVID-19 infections.

Not that Cruz is any stranger to flouting the dangers of the coronavirus pandemic. But it's one thing to downplay the serious risks of a deadly virus; it's quite another thing entirely to make money off it with a line of crappy merch.

And what makes the merch so crappy, aside from the fact that it's 30 bucks and has a large picture of Ted Cruz's face on it? Look no further than the baffling message emblazoned across the chest: McConnell in the front // MAGA in the back.

Yes, I understand that this is a riff on the classic "business in the front // party in the back" mullet description, but ... what is the actual message here? That Mitch McConnell is a bad haircut? That the movement inspired by former President Donald Trump is an even worse haircut? And that despite the fact that McConnell despises Trump, and Trump thinks even less of McConnell, these two terrible political-cum-follicular forces are nevertheless mashed together by the grace of Ted Cruz and his grotesquely oversized cabeza?

Anyway, this, evidently, is what it takes for you to join the #CruzCrew. What are the benefits of being in said club? I honestly couldn't tell you. There's probably a lesson in there somewhere about what the Cruzified corner of the GOP stands for, beyond overpriced tchochkes in the service of wealth and power, but frankly, I'm too depressed by this whole thing to suss it out any more than that.

More like this
D.C. statehood just took a huge leap forward — into a near certain deadlock
By Rafi Schwartz
Watch Stacey Abrams calmly school a GOP senator on why Georgia's voting bill is trash
By Rafi Schwartz
The new "America First Caucus" is giving off big Nazi vibes
By Rafi Schwartz
Stay up to date