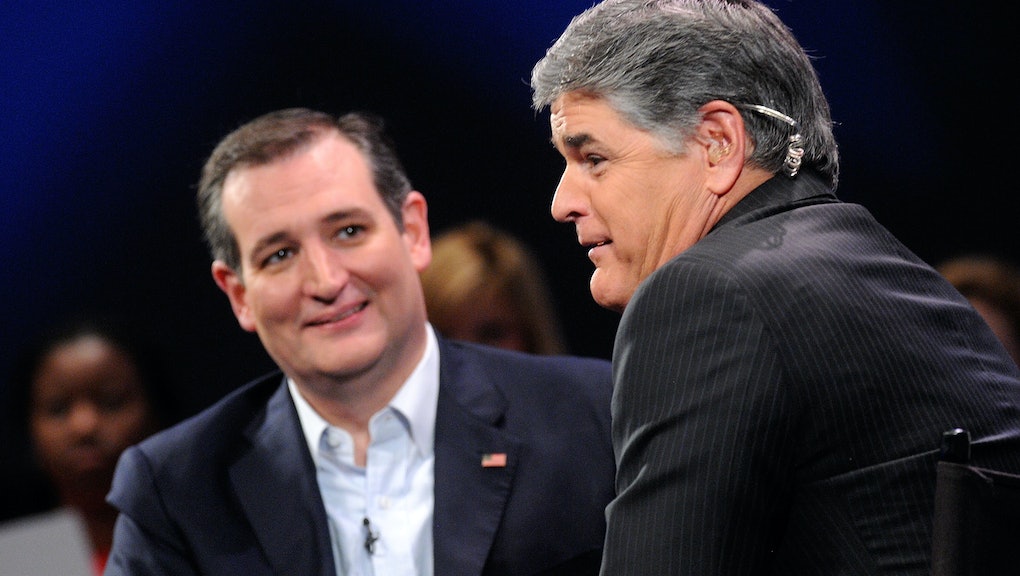 In the days leading up to the devastating winter storm that left millions of Texans without power and killed at least 80 people, Texas Gov. Greg Abbott got a call from a weather expert. Unfortunately, that expert was Joe Bastardi. The professional meteorologist and right-wing anti-science grifter had Abbott's ear thanks to Ted Cruz and Sean Hannity, who insisted that Bastardi knew his stuff and could help in the lead up to the storm.

Bastardi, described drolly by energy industry publication E&E News as a "fringe weatherman," was apparently put in touch with Texas's top decision-maker by Cruz, the Texas senator most recently known for trying to escape to Cancun while his constituents were freezing and was shamed into returning home before he could even apply sunscreen. While appearing on Hannity's Fox News show, Cruz said, "I reached out to Gov. Abbott and said, 'Listen, this guy knows his stuff, and you ought to talk to him.'" Bastardi meanwhile told Glenn Beck that it was Hannity who connected him to Cruz. "Friday night I got a call from Sen. Cruz and we talked for about a half hour. And then we talked the talk with Gov. Abbott."

Hannity and Cruz seem particularly proud of getting Bastardi on the line with Texas leadership, though unsurprisingly it doesn't seem like he helped a whole lot. Bastardi told E&E News that he described the coming storm to Abbott as "a winter version of a Category 5 hurricane," but he didn't appear to offer any particularly groundbreaking insight into the weather event.

Honestly, that's about the best-case scenario for getting Bastardi involved. The chief forecaster at WeatherBELL Analytics and chief climate denier on a number of Fox News programs, Bastardi has made his bones being one of the go-to guys to deny the scientific consensus of climate change. Over the more than a decade he has spent popping up across the right-wing ecosystem, he's made plenty of decidedly wrong declarations that misinform the audience — or simply tell them what they want to hear. A sampling: He's claimed that climate change "was as bad ... or even worse" in the 1930s and '40s as it is today, a commonly cited myth that is both wrong and confuses regional weather and global climate; he’s claimed that climate change is "naturally occurring" (as opposed to man-made) and has said the Earth will enter a cooling pattern by 2030; he wrote a book titled The Weaponization of Weather in the Phony Climate War, the foreword for which was written by — wait for it — Sean Hannity.

So why exactly was Bastardi on the phone with Abbott for even one second in the lead up to the deadly winter storm? Why get him on the line when he admittedly had nothing of particular interest to say? So the right-wing ecosystem could continue feeding itself, of course. Beck had Bastardi on his program to talk about how he got in touch with Abbott and how he knew better than both the federal government ("I tweeted that there should be a federal response the same way as preparation for a hurricane goes") and the local media ("Saturday morning, I was digging into the Texas newspapers and I realized that they really didn't get it"). He went on Hannity to talk about "how fossil fuels are now also being blamed for what happened” — which, they are, because they directly contributed to the crisis. He went on the Operation Freedom Radio Show, a fringe far-right program that has promoted conspiracy theories of election fraud.

Hannity gets Bastardi in touch with Cruz, who connects him with Abbott, which all gives Bastardi more credibility. Bastardi then uses that newfound juice to go on Hannity’s show and spew more nonsense. And everyone involved can stay cozily insulated from reality.

More like this
What cities will be most affected by climate change?
By Vanessa Taylor
The ocean is about to swallow a climate research facility, which feels fitting
By AJ Dellinger
Leaked calls reveal the conservative "master plan" to tank climate action
By AJ Dellinger
Stay up to date