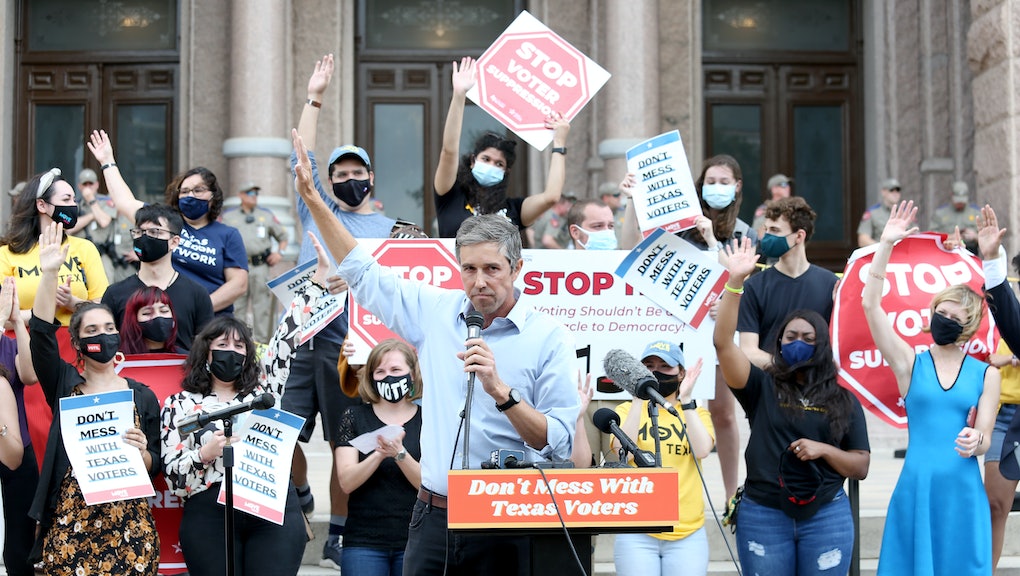 Texas Democrats staged a dramatic legislative maneuver on Sunday night in a last ditch attempt to block the final passage of a GOP-backed suite of restrictive voting rules. With just an hour left before a midnight voting deadline, Democratic lawmakers walk out en masse from the capitol building in Austin, denying the Republican-held state legislature the requisite quorum to approve a law described by President Joe Biden as "part of an assault on democracy that we’ve seen far too often this year—and often disproportionately targeting Black and Brown Americans."

The bill, S.B.7, describes itself as "relating to election integrity and security, including by preventing fraud in the conduct of elections in this state; increasing criminal penalties; creating criminal offenses." In actuality, it represents one of the GOP's most restrictive voter suppression efforts in the country. If passed, the bill would ban a number of early voting and mail-in voting methods, and would criminalize sending mail-in ballots to residents who did not specifically request them.

The bill has been a major priority for Texas Republicans, and has been backed by Gov. Greg Abbott, who previously pledged to sign the legislation. However, despite the widespread support within the Texas GOP, the initial versions of the bill passed by the House and Senate were dramatically different, necessitating a frantic, closed-door negotiation session to reconcile the two versions of the legislation. When the final bill was unveiled for Sunday night's vote, it contained a number of additional provisions that had not been discussed during previous open debates.

So, with just hours left before the midnight deadline to pass the bill and send it to Abbott for final approval, Texas Democrat caucus chair Rep. Chris Turner texted his caucus members, telling them to "leave the chamber discreetly. Do not go to the gallery. Leave the building."

The dramatic walk-out came after Democrats unsuccessfully attempted to run out the clock before Sunday night's deadline with a variety of procedural stalling techniques — something Republicans were able to counter with the threat to simply end debate on the bill.

"It became obvious Republicans were going to cut off debate to ram through their vote suppression legislation,” Turner said in a statement to the New York Times. “At that point, we had no choice but to take extraordinary measures to protect our constituents and their right to vote."

"We saw that coming,” Democratic state Rep. Nicole Collier told the Texas Tribune. “We’ve used all the tools in our toolbox to fight this bill. And tonight we pulled out that last one."

Despite Sunday night's missed deadline, Texas Republicans have vowed to push ahead with passing S.B.7 in a special legislative session, in which they will once again have the majorities to send the bill to the Governor's desk.

"Legislators will be expected to have worked out the details when they arrive at the Capitol for the special session," Gov. Abbott announced in a tweet shortly after it was clear the measure had failed on Sunday night.

Given its likely passage in a special session, state Democrats have already begun to look ahead to fighting the bill in the Judiciary should it be passed. Speaking with the Texas Standard Rep. Julie Johnson promised that "the State of Texas will go to court again for this bill."

"We will waste millions of taxpayer dollars again defending this awful piece of legislation that seeks to disenfranchise so many Texas voters," Johnson added.

More like this
A new Florida bill seems designed to keep schools from teaching about racial inequities
By Rafi Schwartz
"She's gonna disappear": A GOP congressional candidate threatened to sic Russian hitmen on his opponent
By Rafi Schwartz
Someone please tell this poor simple insurrectionist which office he's running for
By Rafi Schwartz
Stay up to date