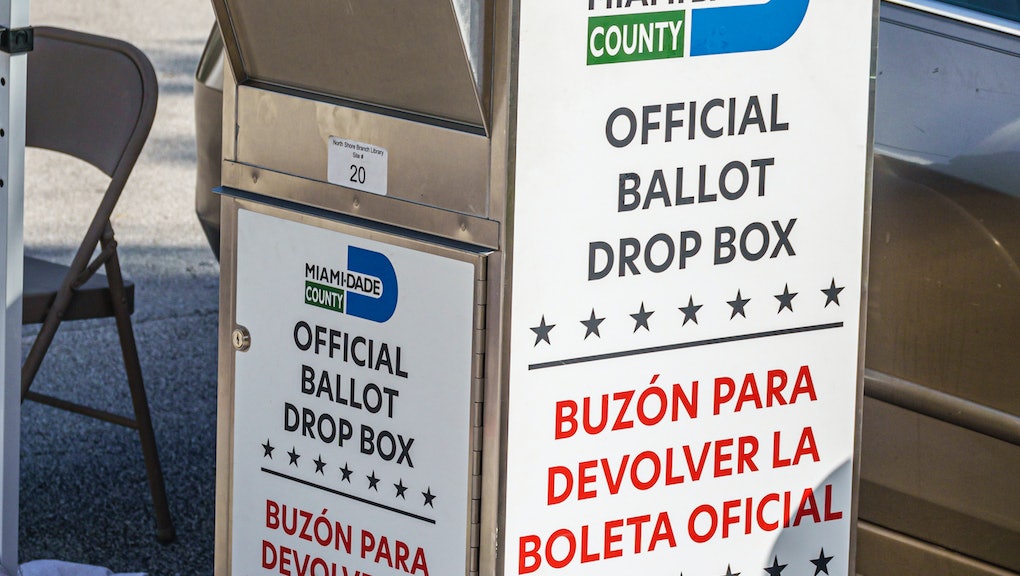 Throughout the 2020 presidential race, former President Donald Trump railed against mail-in voting, often making false claims that it would lead to increased fraud. Even after his defeat, Republicans across the United States have continued to take direction from Trump's statements. Now, Florida is one step closer to tightening voting restrictions, in a move that has been widely criticized by Democrats from the state.

On Monday, Florida's Republican-controlled state Senate advanced S.B. 90, which would make a number of changes to voting laws in the state, including limiting where ballot drop boxes could be placed and making them no longer available 24/7. Instead, an election official would monitor all drop boxes, which would only accept votes during early hours. Anyone who wished to drop off a ballot would also need to show identification to an election official.

The bill would make changes to mail-in voting, too, requiring people to request a ballot every election cycle, rather than every two as under the current law. As if all that wasn't enough, S.B. 90 would also restrict the distribution of food and water to those standing in line to vote. Under the bill, only election workers can hand out those items within 150 feet of any polls or drop boxes. All together, the new rules would seriously restrict who is able to vote, by using common methods that tend to disenfranchise lower-income voters or others who do not have as much flexibility to leave work to cast a ballot or stand in line for hours.

Many have compared Florida's bill to Georgia's S.B. 202 which Republican Georgia Gov. Brian Kemp passed behind closed doors at the end of March. That bill ushered in a new era of voter suppression in the state by granting the state power over county elections, requiring photo IDs for mail-in voting, and criminalizing passing out food and water — much like the Florida bill would do.

Both Florida and Georgia's voter suppression bills come after an analysis from NBC News and TargetSmart, a Democratic political data firm, found that mail-in ballots from voters of color were being rejected at higher rates. NBC News reported that in Florida specifically, voters of color have their ballots flagged at twice the rate of white voters.

Florida's bill is not yet law — an even stronger version is still under consideration in the state's House of Representatives. In order for the bill to reach Republican Gov. Ron DeSantis, the House and Senate have to consolidate their proposals into one identical version and then both pass that version. But as NPR notes, Florida's legislative session ends Friday, which means both that Republicans are in a time-crunch to pass their suppression rules and that there isn't much time for state Democrats and civil rights advocates to push back.

Still, they are trying. Following the Florida Senate's advancement of the bill, the NAACP Legal Defense and Education Fund sent a letter opposing the proposal, writing, "Equitable voting opportunities are critical to ensuring that Florida voters can safely, securely, and freely participate in our democracy. Increasing voting access builds a healthier, more inclusive democracy. ... Yet S.B. 90 is written to undermine significant progress to expand voting rights and ballot access in Florida, especially for Black voters and other voters of color."

In a statement about the letter, the LDF noted that S.B. 90 "would impose unnecessary barriers and burdens that will disproportionately impact and other voters of color, voters with disabilities, the elderly, and low-income voters." In addition, the LDF said that the bill may violate federal laws, including the Voting Rights Act of 1965 and the Americans with Disabilities Act.

If the state's two legislative chambers can agree on one version of the bill, DeSantis is likely to sign it. And if that happens, the southeastern corner of the U.S. will be decidedly hostile territory for voters.