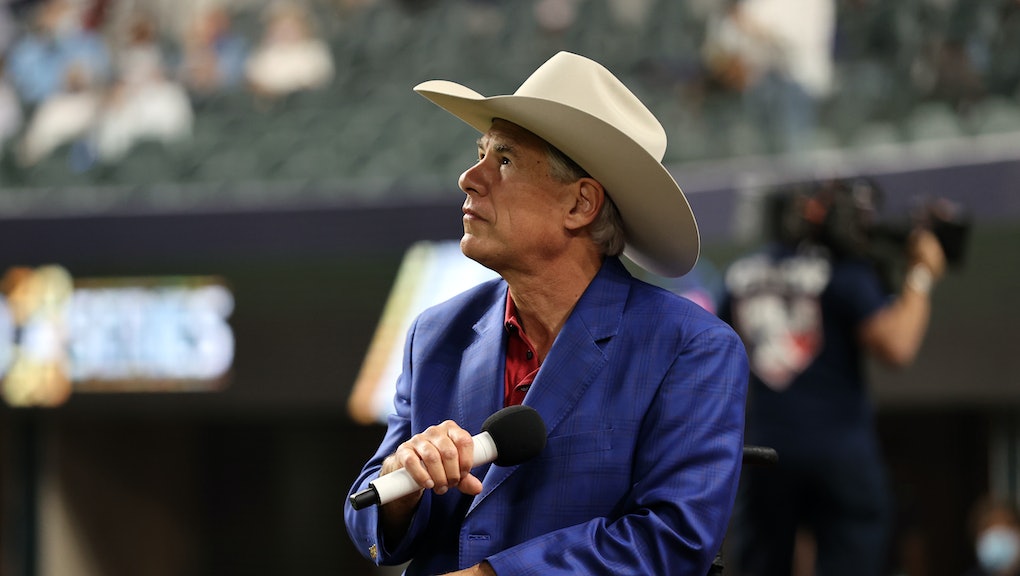 After a full year of living in a pandemic, many Americans are eager to get back to normal — or, as close to normal as possible. That desire, though, shouldn't get in the way of safety protocols — especially as new coronavirus variants continue to spread. But apparently Texas Gov. Greg Abbott doesn't see it that way. Earlier today, Abbott threw caution to the wind with an announcement ending the state's mask mandate and allowing all businesses to open at 100 percent capacity.

"We must now do more to restore livelihoods and normalcy for Texans by opening Texas 100 percent," Abbott said during an address from Montelongo's Mexican Restaurant in Lubbock, Texas. "Make no mistake, COVID-19 has not disappeared, but it is clear from the recoveries, vaccinations, reduced hospitalizations, and safe practices that Texans are using that state mandates are no longer needed."

Perhaps most confusingly, Abbott went on to say that the announcement doesn't mean people should abandon all safety practices. Rather, he claimed, "it is a reminder that each person has a role to play in their own personal safety and the safety of others. With this executive order, we are ensuring that all business and families in Texas have the freedom to determine their own destiny."

Under this new Executive Order, businesses in Texas are still allowed to impose restrictions at their own discretion. And if coronavirus hospitalizations in any Texas hospital region rises above 15 percent, a County Judge in that region can implement mitigation strategies. But those judges can't impose penalties for failing to wear a face mask, and restrictions can't reduce capacity to under 50 percent for businesses or any other type of entity.

Abbott's case for ending the state's coronavirus restrictions mostly revolves around the vaccine rollout. His office noted in a statement that nearly 5.7 million shots have been administered in Texas, and the state is now administering almost one million shots each week. That seems like a lot on the surface but you have to remember two things.

First, both vaccines being used now — Pfizer and Moderna — require two shots. So while Texas may have administered 5.7 million shots in total, the Austin American Statesman reported on Thursday that only 1.5 million people are fully vaccinated. Meanwhile, Texas, with a population of over 29 million, has, to-date, reported more than 2.6 million confirmed coronavirus cases and more than 44,000 deaths, per The New York Times.

Abbott's announcement makes Texas the first state to end its coronavirus restrictions and comes just one day after Rochelle Walensky, director of the Centers for Disease Control and Prevention (CDC), warned that the United States is at high risk due to new variants.

"At this level of cases with variants spreading, we stand to completely lose the hard-earned ground we have gained. These variants are a very real threat to our people and to our progress," Walensky said during a White House press briefing. "Now is not the time to relax the critical safeguards that we know could stop the spread of COVID-19 in our communities, not when we are so close."

More like this
New York will finally offer vaccines to all inmates, after a judge's order
By Vanessa Taylor
New York has set aside a massive, first-of-its-kind fund for undocumented workers
By Rafi Schwartz
Jailhouse lawyer Johnnie Cook is fighting for pandemic justice
By Mai Tran
Stay up to date