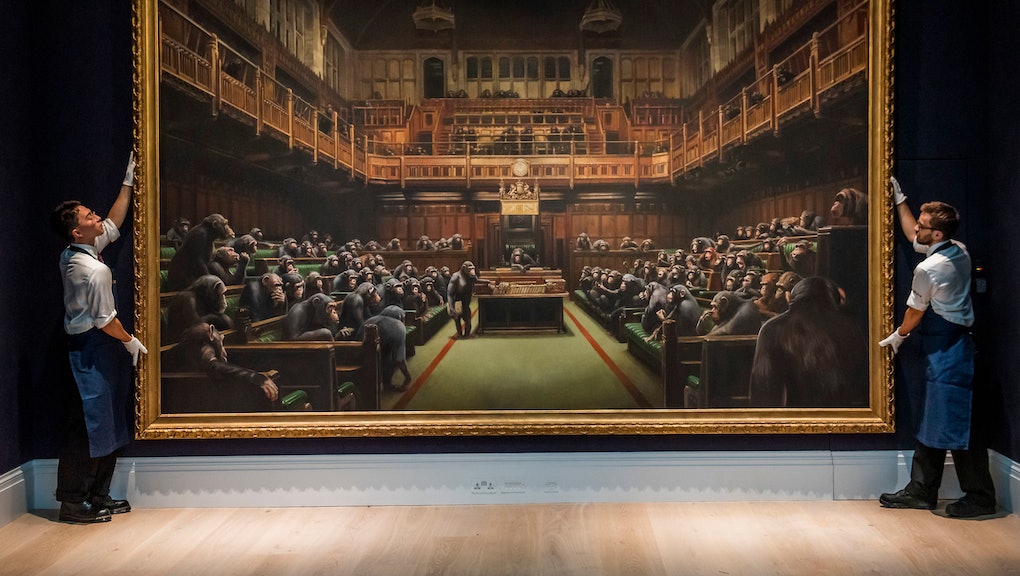 Thanks to Brexit, this Banksy painting of chimps in parliament is worth $2 million

The European author and social scientist Frank Möller wrote that “art can be understood as a form of, or contribution to, political discourse; as a descriptive, interpretive, or explicitly critical approximation; or as a vehicle with which to transcend the political.” Surely, this is what Banksy was thinking when he painted a picture replacing the members of British Parliament with apes. And, surely, why said painting is expected to fetch over $2 million at auction.

The painting, Devolved Parliament, which, again, depicts the House of Commons filled with chimpanzees, is, according to Sotheby’s, “potent and poignant, bold and brash.” The painting is being sold today, the same day that the United Kingdom presented their Brexit deal to the European Union. The delivery of the proposed deal follows months of fraught politics in the UK, including the forced resignation of former British Prime Minister Theresa May and videos of John Bercow hectically trying to gain control of parliament where conservative PM Boris Johnson faced off against Labour Party head Jeremy Corbyn.

According to the Guardian, EU president Donald Tusk remains “unconvinced” by the deal for the UK to break from the EU that PM Johnson delivered on Thursday. The British press has predicted that this will result in “weeks of chaos,” as the UK’s departure from the EU is still highly contested, and has created historic riffs in the British government. This makes Banksy’s 13-foot oil canvas painting of chimpanzee’s filling the seats of parliament even more spot-on, according to the rest of the Sotheby’s description.

“Banksy’s monumental oil painting of the House of Commons offers a premonitory insight into the increasingly tumultuous face of politics in contemporary Britain,” the Sotheby’s notice reads. “Bitingly satirical in nature, the present painting depicts the inner sanctum of British politics; yet instead of debating MPs, the House of Commons is here filled with chimpanzees in a scene of mayhem and madness.”

The painting was first unveiled in 2009 at the Bristol Museum & Art Gallery and was at that point titled Question Time — the painting’s new name honestly fits the current situation a bit better. The painting carries the inscription: “Laugh now, but one day we’ll be in charge.” In 2009, that probably felt a little bit more referential to Planet of The Apes — but now looking at PM Boris Johnson, whose entire political career is mired in scandals including allegations of racism and domestic violence, it feels a bit more like an apt prediction.

The art might feel a little bit obvious or on the nose for some viewers (like me), but for Sotheby’s European head of Contemporary Art, Alex Branczik, the ginormous canvas is an essential piece of political art. In an interview with The Independent, Branczik said, “regardless of where you sit in the Brexit debate, there’s no doubt that this work is more pertinent now than it has ever been.”

Branczik also described Banksy as “the satirical polemicist of our time” and “a modern-day Voltaire.” I get that the man is trying to sell some expensive art, but calling the artist who came up with Dismaland the equivalent to one of the most well-known Enlightenment philosophers might be a reach.

Banksy remains interesting to the public because their identity remains shrouded in mystery; If we knew who painted the UK parliament filled with chimpanzees on a canvas roughly the size of a large elephant, we’d probably be like “Yeah dude, the government sucks hard. We get it.”

But we don’t know who Banksy is, and so his 10-year-old painting that seems to capture the obvious chaos of Brexit is now on auction for $2 million. Place your bids here.