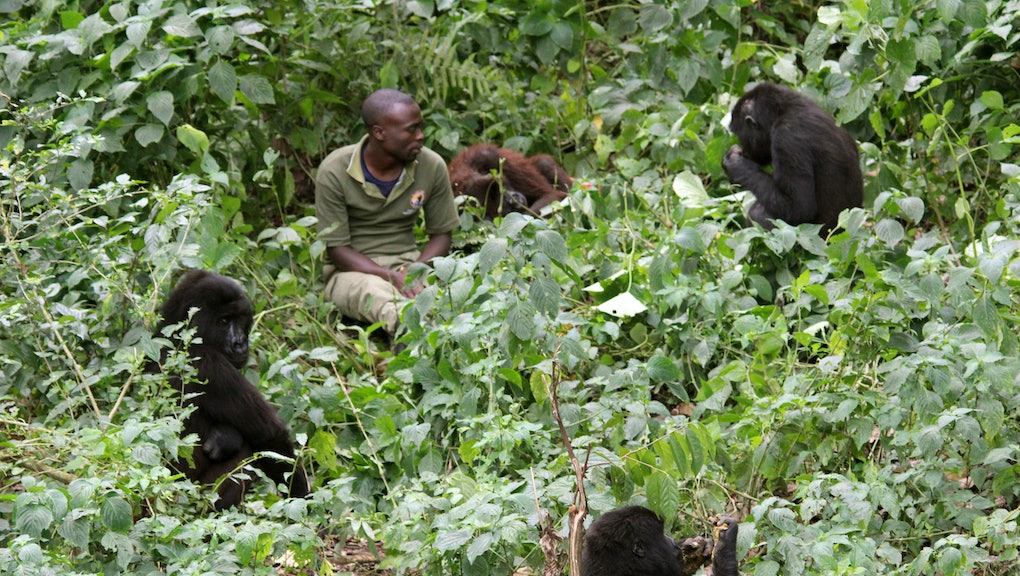 Nature documentaries are a great way to get to know this big planet full of life that we all call home. Researchers are constantly discovering more and more about the Earth, and these films can offer the public an easy way to understand how human activity impacts, or works together with, the natural world.

But be forewarned: Nature documentaries aren't all adorable animals and sunshine and blue oceans. They can be just as depressing as they are inspiring, and highlight the fact that solutions to complex environmental issues are often very difficult to solve for very frustrating reasons.

Here are ten documentaries on Netflix that will whisk you away from quarantine and into the wilds of nature.

Virunga National Park is home to a community of villagers and some of the world's last mountain gorillas in existence. Both these residents depend on the national park to live and flourish. But their lives were disrupted when an oil exploration company called SOCO International (which has since been renamed to Pharos Energy) used warlike intimidation tactics and aggression to pressure villagers and park wardens.

Virunga is a documentary that follows four people as they find themselves in the middle of the conflict: A gorilla caregiver, two armed wardens, and a French investigative journalist. Their fight to protect Virunga National Park won several awards and raised awareness about the threat to the park, which pushed SOCO International to eventually drop its oil license for the area in 2015.

Netflix's Our Planet is a documentary series that covers different ecosystems around the world, showing the role each plays. The series is unique in that it focuses more on mankind's impact on the environment, including how climate change affects a creature's home.

If you're a big fan of nature documentaries, you might notice that Our Planet is filmed a lot like the BBC's highly acclaimed Planet Earth series. This is because the same producers are behind Our Planet, and have even brought on the legendary Sir David Attenborough to narrate each episode.

Full episodes are also available on Netflix's YouTube channel for folks who don't have a subscription but really need a distraction right now.

Mission Blue is a touching documentary that centers on Dr. Sylvia Earle, a U.S. marine biologist who has spent her career trying to protect the ocean from overfishing, plastic pollution, and climate change. Dr. Earle was the first woman to be named chief scientist at the U.S. National Oceanic and Atmospheric Administration (NOAA), and eventually left her position to defend our waters without bureaucratic limitations. Dr. Earle's passion for the ocean is heartfelt, and she explains very clearly why she wants to create protective areas for our waters the same way we create national parks for land.

4. The Tigers of Scotland

Tigers and panda bears have become the face of international conservation efforts, but what about more local wildlife? In The Tigers of Scotland, conservationists in the UK have come together to spread awareness of their country's rarest and most threatened mammal — the Scottish Wildcat. These felines live such solitary and elusive lives that many people don't even know they exist.

Interestingly enough, the primary threat to the Scottish Wildcat isn't habitat destruction due to human development; it's the housecats that are contributing to the problem by mating with Wildcats, which creates hybrids. At this time, experts believe there might be more hybrids than purebreds, and have even considered the possibility that there are no 100 percent pure Wildcats left.

"Traders in ivory actually want extinction of elephants," says a gravelly voiced man in the trailer. "The less elephants there are, the more the price rises."

Those harrowing words form the undertone of The Ivory Game, a documentary from executive producer Leonardo DiCaprio that exposes the illicit ivory trade between poachers in Africa and organized crime in China, where possession of ivory is a status symbol. Hidden cameras, poachers and rangers, and security guards protecting elephants all come together in this documentary to show how the ivory trafficking world turns. The message of the film is very simple: As long as people continue to purchase ivory, elephants will continue to suffer.

The plastic polluting our oceans is a crisis. National Geographic estimated that plastics take "450 years to never" to degrade, which is really bad! Worse yet, single-use plastics have made a comeback, much to the glee of large plastic producers, due to pandemic concerns.

Navigating the difficult line between the environment, reusables, and keeping things sterile during a pandemic is undoubtedly tough, but the cost of plastic pollution, as seen in A Plastic Ocean, is too high to ignore. The film, released four years ago, shows what's at stake through the lens of an ocean-loving investigative journalist and a world-champion freediver.

National Parks Adventure is less tragic than some of the other films on this list. A team of explorers takes viewers on a trip through the beautiful national parks in the U.S. in crystal clear, high-definition video that will make you ache with a desire to travel.

This documentary serves as a stunning reminder of the beautiful and varied protected environments in the U.S.

With poisoned arrows and barbed wire embedded in their bodies, the rotting carcasses of elephants killed by poachers are found by the Kenyan conservationists with the David Sheldrick Wildlife Trust. Dubbed the "Gardeners of Eden," they rehabilitate orphaned baby elephants that have lost their mothers to the ivory trade.

The cameras don't shy away from the brutality of these killings or the wildlife officers' vows to "hunt" the people who killed the mothers. And the documentary also doesn't shy away from one of the primary drivers of poaching: Poverty.

"It's just a life like your life," a chuckling poacher explained in an interview. "But, when the stomach is empty, you can do anything."

Corals are fascinating, living creatures that make up much of the ocean's ecosystem. But as climate change warms and acidifies the waters, these organisms are struggling to stay alive. Recent studies have predicted we could lose our coral reefs by 2100 if this continues.

Chasing Coral is about a team of divers, photographers, and researchers swimming through dangerous ocean conditions to capture video and photographic evidence of the dying coral. The sharp contrast between the lively coral teeming with fish and the rock-like, stiff corpse after the waters have warmed is shocking. Which is exactly the point: The crew wants their documentary to "wake up the world" and spur people to demand action against this devastation.

Netflix also has the full documentary available on their YouTube channel.

Naledi: A Baby Elephant's Tale is the story of an orphaned baby elephant and the people who have dedicated their lives to saving her. Thanks to their continuous efforts, Naledi was able to better her health and regain the strength to live despite her tragic early life.

Although the film addresses issues that threaten elephants, such as poaching and habitat loss, Naledi is the star of the show. Her life, as seen in the documentary, can truly open one's eyes to the varied, and emotional, lives of animals.

More like this
This is what it looks like when a city floods in real-time
By AJ Dellinger
Amid daily reports of catastrophe, Americans are finally starting to realize climate change is bad
By AJ Dellinger
QAnon queen Marjorie Taylor Greene got suspended from Twitter for spreading coronavirus misinformation
By AJ Dellinger
Stay up to date