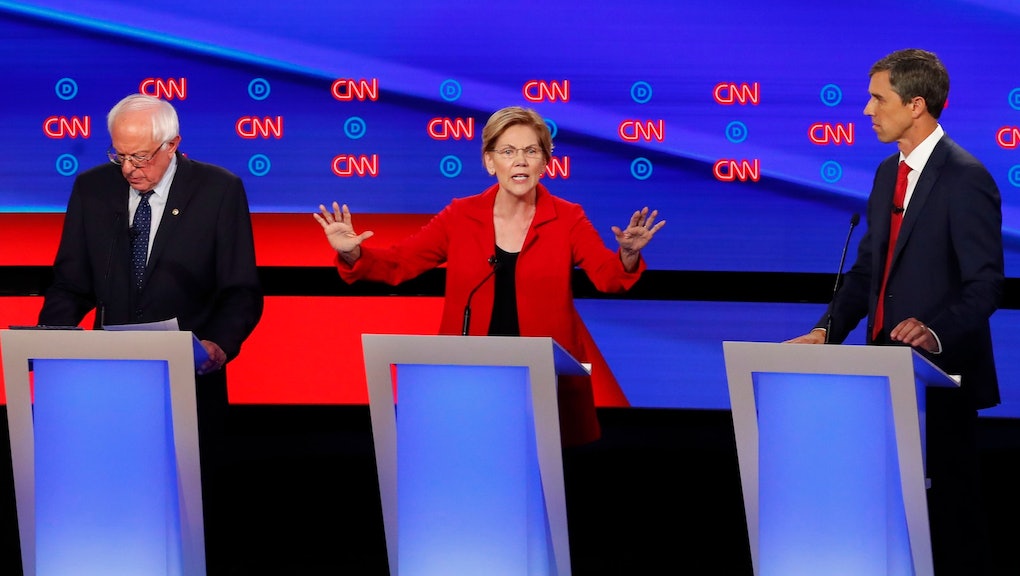 We are now in the second round of the 2020 Democratic debates, with 10 of the 20 candidates who qualified taking the stage on Tuesday night. The crowded room was often overwhelming — maybe there are too many people running for president, you know? — as Beto O'Rourke, Bernie Sanders, Elizabeth Warren, John Delaney, John Hickenlooper, Pete Buttigieg, Marianne Williamson, Tim Ryan, Steve Bullock, and Amy Klobuchar all tried to make the case for why they should be the person to run against Donald Trump.

Despite the busy nature of the night, though, a few of the candidates managed to have some memorable moments in the form of sassy, bizarre, or biting remarks. Here are the most notable lines from Tuesday's debate.

"Yes I do! I wrote the damn bill." — Bernie Sanders

Sanders made some truly cutting comments throughout the debate, but perhaps his best moment came when, working his way through an explanation of his plan for Medicare for All in regards to unions, he was interrupted by Representative Tim Ryan.

"Yes I do! I wrote the damn bill," the senator responded, to a crowd of cheers. He then continued to explain how his plan for healthcare would create a more financially just system.

The moment was so notable that by Wednesday morning, the Sanders campaign was offering merch with his instantly iconic words.

"I don't understand why anyone goes through all the trouble of running for president of the United States just to talk about what we really can't do and what we shouldn't fight for." — Elizabeth Warren

The general consensus of the debate's viewers was that Warren pretty much committed a murder when she shut down former Representative John Delaney with this line. Her quote came after Delaney spent a fair amount of time responding to the objectives of Warren and Sanders with more tempered, centrist remarks.

The Massachusetts Senator's statement was met with shrieks of delight from the audience, while Delaney sat in seemingly stunned silence, his eyebrows wriggling in discomfort.

One of the more powerful moments of the night was when the Indiana mayor pointed out that there was no policy that Democrats could propose that would make Republicans happy, as there was nothing they could do to earn more support or cooperation from a party that has prided itself on obstructionism.

"If you think any of this wonkiness is going to deal with this dark psychic force of the collectivized hatred that this president is bringing up in this country, then I'm afraid that the Democrats are going to see some very dark days." — Marianne Williamson

Williamson, a spiritual advisor and occasional guru to celebrities, brought her signature brand of kookiness to the debate stage. Although the candidate made some strong talking points about reparations and race in the United States, she also spoke about dark psychic forces — an issue she alone seemed to be invested in.

Williamson calling something other than her own presence wonky is truly rich, considering that she's more of a meme factory than a serious presidential contender. Still, don't forget that she has some dangerous beliefs. Her history with HIV/AIDS is more than troubling, and her belief that people can just stop taking psychiatric medication is not only ignorant, but dangerous.

"I am the first generation to see school shootings. We have produced the second generation. We dare not allow there to be a third." – Pete Buttigieg

In another display of somber, but effective delivery, Buttigieg spoke about the gun violence plaguing the United States. Just the weekend before, three mass shootings, including one where a six-year-old child was killed. Buttigieg's statement made him stand out amongst the rest of the candidates.

"There are people that voted for Donald Trump before that aren't racists." — Amy Klobuchar

Not every line delivered on Tuesday night was impressive. Some candidates' statements, like Klobuchar's here, were disappointing, even if they were well intended. While it is certainly true that not every single person who voted for Trump shares his beliefs, they all did choose to vote for someone who campaigned on racist rhetoric.

In a time when the president is only further amplifying divisive and hateful comments, trying to appeal to the people who supported his campaign, instead of the people who were affected by its discriminatory policies, feels unwise.

"The legacy of slavery and segregation and Jim Crow and suppression is alive and well." — Beto O'Rourke

O'Rourke's effectively connected the racism and inequality of today to the history of the beginning of the United States. His powerful statement was reinforced by the fact that he brought three members of a Texan high school football team who kneeled during the national anthem as his guests to the debate.

Ten more candidates will take the stage on Wednesday night, so expect plenty more memorable lines to come our way.

More like this
New York has set aside a massive, first-of-its-kind fund for undocumented workers
By Rafi Schwartz
The Chauvin trial is incapable of delivering real justice
By Vanessa Taylor
Jailhouse lawyer Johnnie Cook is fighting for pandemic justice
By Mai Tran
Stay up to date