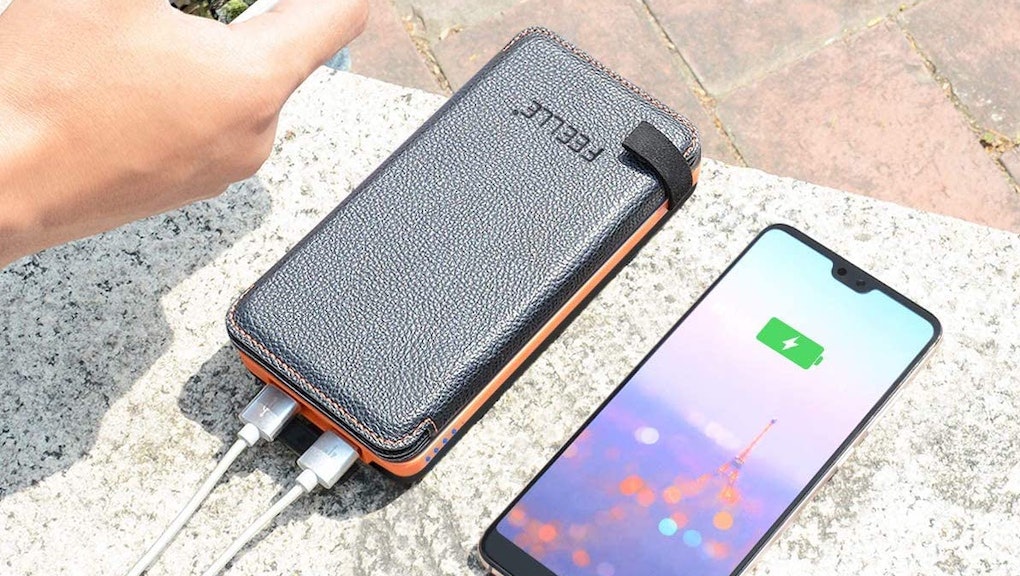 Whether you’re going on an off-the-grid camping trip or just want a backup battery, a solar-powered charger can help you stay connected. The best solar phone chargers use one or more energy-converting panels that allow you to power up your phone, and they’re compact enough to carry with you. Some are even dust- and water-resistant, so they'll stand up to outdoor elements.

When shopping for a charger, you'll have a choice of two designs — solar power bank and solar charger. Here’s what you need to know about each:

These are about the same size as traditional portable battery packs and include at least one integrated solar panel. They can be charged at home with a USB cable before you leave, and then used to top off your phone's battery life with solar power as needed. Of course, these aren't best option if you're planning to rely exclusively on solar energy for more than a couple days. The big benefit of power banks is that they can hold a charge, so you don’t need to rely on the sun being out in order to power up. The rechargeable battery capacity is measured in milliamp-hours (mAh), and most options are 24000mAh, which is enough to charge your phone at least three times (and for most phones, significantly more than that), but there are larger and smaller capacity options, as well.

These typically use several foldable panels that convert solar power directly into electricity for your phone. Since they don't have built-in backup batteries, the panels need to be in direct sunlight while charging your phone. On the bright side, these tend to be a more lightweight option, and they're perfect for extended time away from outlets, since the multiple panels gather more solar power.

Other features to consider when shopping for a solar-powered phone charger: multiple USB ports so you can charge several devices at once, a built-in flashlight or compass, and water resistance. Before you head out on your next adventure, scroll on for the best solar phone chargers on Amazon so you can keep your devices powered up.

What makes it great: The BigBlue solar panel charger offers an efficient way to charge multiple devices at once, thanks to its three 5-volt USB ports and four fold-out solar panels. And although it's the priciest option on the list, it's a worthwhile investment if you're going to be away from an outlet for an extended amount of time and want to keep your phone powered up.

About the size of a tablet when folded down, the charger is lightweight and easy to carry, and you can even use one of the four included carabiners to attach it to your backpack, so you can charge while hiking. But remember: Since this option doesn't have the capacity to store electricity, you'll need to be in sunlight in order to charge. With an IPX4 water-resistance rating, the charger can stand up to the occasional splash, but it's not waterproof or dust-proof.

One reviewer wrote: “Use it every day on Denali. This means it was quite exposed to different elements: I had to stuff it in my backpack with other things, rain/snow drizzled on it, very cold at night, etc.. Never stopped working. Given the three outlets more people of our expedition came to me to use my charger since it was the most reliable one. The holes on the edges and the carabiners that come with it make it very easy to attach it in a way that it can soak up a lot of sun.”

What makes it great: For the best of both worlds, opt for this solar charger with three fold-out solar panels. You can charge this power bank via wall outlet before heading out, but since it has three times as many integrated panels as the first option, it'll more efficiently convert sunlight into electricity for on-the-go charging. Keep in mind, though — these panels are smaller than those of the previous charger, so they won't gather quite as much solar energy as traditional panel models.

The 24000mAh battery can charge an iPhone 8 up to 13 times, and the power bank has dual 5-volt USB ports to charge up to two devices at a time. On top of that, the built-in flashlight has three modes: steady, strobe, and SOS. Plus, this power bank is shock-proof and has an IP65 dust- and water-resistance rating.

One reviewer wrote: “I took this with me on safari in Kenya and it held up great. I was able to charge phones and camera batteries at the same time by simply putting the unit on the dash of our landcover each day. The night light came in handy a few times as well!”

What makes it great: With a stellar 4.5-star overall rating on Amazon and a wallet-friendly price, this portable solar power bank is handy way to ensure your phone stays juiced up, no matter where you are. The 24000mAh solar power bank can provide up to 13 charges to an iPhone 8 and features dual 5-volt USB ports for charging two devices at once. Since the power bank has a built-in battery that holds a charge, you can plug it into a wall outlet before your trip, and then use solar power to boost electricity as needed. And for safety, there’s a built-in flashlight with strong light, flash, and an SOS mode in case of emergency. Plus, this charger boasts an IP66 rating for dust- and water-resistance, and the durable silicone cover protects it if you accidentally drop it.

One reviewer wrote: “This is the solar power bank that I use in rough environments. It's stands up well to being bumped and dropped. It has rubber seals over the ports. It charges via USB or solar and holds more than enough power to keep my phone going all weekend long."

4. The power bank with the most charges

What makes it great: At 32800mAh, this solar power bank has the largest battery capacity on the list (approximately 18 charges to an iPhone 8), so it's perfect if you want to get as many charges as possible before having to plug in or recharge via solar power. It can also charge up to four devices simultaneously, thanks to the two 5-volt USB ports, a fast-charging USB-C port, and even Qi wireless capability. This rugged power bank is shock-proof and has an IP66 rating for dust and water. It also has a built-in flashlight with strong, flash, and SOS modes.

One reviewer wrote: “I bought this for my iPhone, iPad, and headphone recharging. Especially for areas where power my be limited, I wanted to buy one with solar capabilities. I was able to fully charge this with solar panel built on. I was skeptical but the solar charging works.”

More like this
49 cheap, super helpful products you'll wish you knew about sooner
By Mackenzie Edwards
Incredible Prime Day deals that'll sell out the quickest
By The Commerce Team
37 genius products that solve your gross hot weather problems
By Julie Peck
Stay up to date