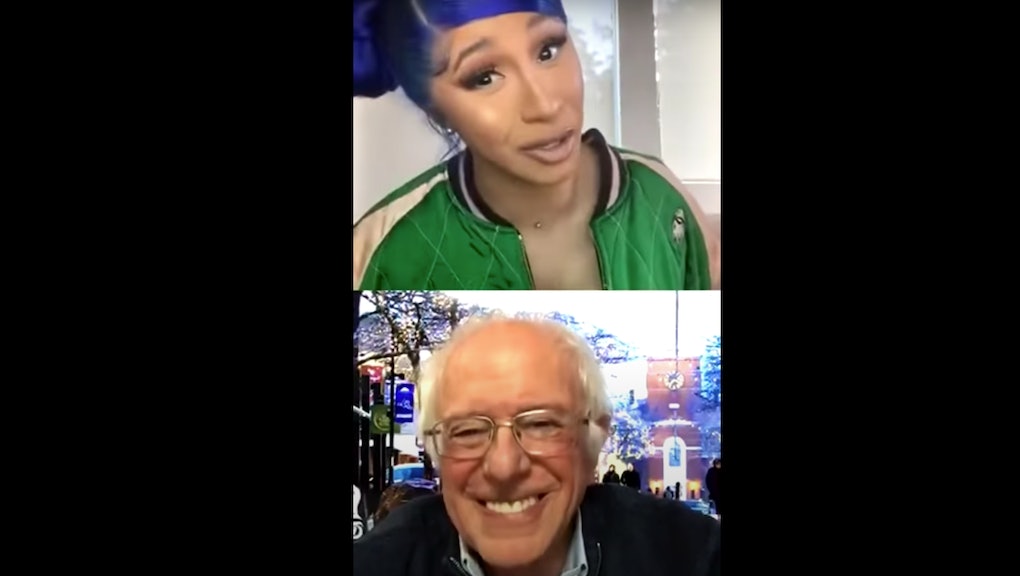 The 8 best celebrity-politician duos of 2020

With the stakes of this year's presidential election higher than ever before, a seemingly unending train of celebrities went to bat for their favorite politicians. Though their expertise isn't about policy, domestic issues, or foreign affairs, celebrities tend to have a much wider reach than politicians do. Plus, they're shiny and interesting, and their involvement helps to humanize elected officials who can often seem distant or unknowable. Here are some of Mic's favorite celebrity-politician mash-ups of 2020.

Cardi B has long been a fan of Bernie Sanders, first sitting down with the Vermont senator last summer at a nail salon in Michigan, where the two discussed police brutality, health care, and student debt forgiveness. Then, this April, shortly after Sanders dropped out of the Democratic primary and endorsed Joe Biden — not to mention shortly after the country shut down due to coronavirus — the rapper FaceTimed the septuagenarian for an interview broadcast on Instagram Live.

Cardi B has long talked about the importance of creating better wages for working-class people, being able to afford to go to college, and getting engaged. Sanders, with his ultra-progressive platform, is a natural fit for her. In August, after Biden had secured the Democratic nomination, Cardi spoke with him about being a parent, police brutality, and the importance of voting in an interview for Elle.

The Queer Eye star endorsed Sen. Elizabeth Warren (D-Mass.) early on in the Democratic presidential primary election. In one of Warren's famous "phone call" videos, she called Van Ness to thank him for his endorsement, which he said was prompted by Warren's vision for reforming the health care industry. It's fun to see Van Ness's energetic personality compare with the practiced political performance of a presidential candidate — especially one who's an unabashed wonk and has made her name by being an expert on fiscal policy. Still, he managed to make the senator crack a smile when he said "we gotta get that Mitch out [of the Senate]."

The singer and now Vice President-elect Kamala Harris jumped on an Instagram live in October to talk about the importance of young people getting out to vote in the general election. Both Cyrus and Harris are based in California, the most populous state in the country with a growing voting bloc of young people. Cyrus pointed out that young people often don't feel heard by elected officials, and Harris responded by telling her that it's important young people are "at the table" of the Biden-Harris administration. "The only way we're going to strengthen as a country is to make sure every voice is heard and respected," Harris said.

Kaling has been a vocal supporter of Harris's from the beginning of her bid for president. The two paired up to make dosas in November 2019, when Harris was still running for president herself. While they made the South Indian "sourdough crepe" — as described by Kaling — they shared stories about their parents, and the vice president showed off her knife skills. "Sen. Harris, I say this with respect, but you're kind of a show-off," Kaling said as Harris sliced an onion. Now, Harris will make history as the first Asian person — her mother was Indian — to be vice president, as well as the first woman and first Black person to serve in the position.

Gomez and Harris spoke about one month before Election Day, candidly addressing why some young people may be less politically engaged. Gomez has lived through multiple struggles with mental health and lupus, a life-threatening inflammatory illness, and she and the senator talked about preserving the Affordable Care Act and expanding access to mental health care.

The NBA power couple sat down with their daughters over the summer to discuss the importance of getting out to vote for Biden, then the Democratic presidential nominee. The parents asked their daughters what they cared about and what they knew about the role presidents play in shaping policy. Riley, the Currys' older daughter, seemed particularly interested in environmental issues, while younger daughter Ryan provided mostly comic relief.

The two-time World Cup champion chatted on the phone with Warren early in the Democratic primary season. Rapinoe greeted the senator as "Elizabeth" and then quickly corrected herself saying, "Oh my gosh, I can't even call you by your first name, that's so inappropriate" — but Warren seemed to enjoy it, quipping "No it's not inappropriate! It's exactly right!" in response. The two discussed Warren's presidential platform as well as Rapinoe's leadership as a captain of the U.S. Women's National Team. "You both lead your team on the field, but you also help lead America off the field," Warren said.

The White Stripes namesake performed in Detroit in October 2019, telling the audience that Sanders was the real deal. "Bernie Sanders is telling the truth, and I really do trust him," White said. White has not gotten involved in previous presidential races or made public endorsements, but decided to support Sanders, saying it was primarily because Sanders supported abolishing the Electoral College, which White said "I think is the reason we're in the mess right now."

He continued: "I have this silly notion that the more Americans that vote for somebody, that person should be president. Isn't that kind of funny?" White wasn't the only indie rocker to back Sanders, with The Strokes, Bon Iver, and Vampire Weekend all playing shows in support of the Vermont senator during the primary season. Rapper Killer Mike, one half of the duo Run the Jewels, also famously supported Sanders in 2016 as well as 2020.