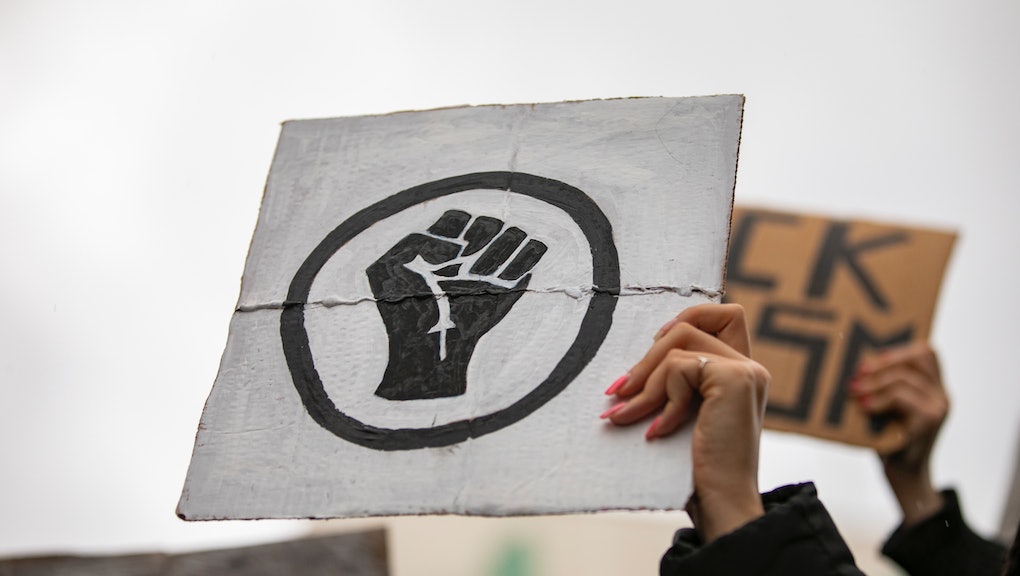 The ACLU is suing Los Angeles County over "draconian" curfews

Across the United States, protests spurred by the police murder of George Floyd in Minneapolis seem far from losing steam. While a number of cities have implemented curfews to keep people off the streets at night, protesters have continued gathering — and sometimes been met with more police aggression in response. Now, the ACLU is suing over the use of curfews in Southern California, calling them unconstitutional. The lawsuit could change how cities are permitted to respond to protests in the future.

Starting Sunday night, officials extended curfews to all of Los Angeles County. Considering the curfew's early start time of 6 p.m., many locals became concerned about how long the rule would be in effect. During a phone interview with KTLA, Los Angeles Sheriff Alex Villaneuva said, "The curfew will continue on a daily basis until the organized protests are gone."

That statement didn't sit too well with the American Civil Liberties Union of Southern California. On Tuesday, the ACLU sent letters to LA County and the city of Los Angeles requesting that the curfews be rescinded. The letter stated, "The order in its present form is neither authorized by state statuary law nor consistent with the United States Constitution."

The following day, the ACLU announced it had filed an emergency lawsuit on behalf of Black Lives Matter-Los Angeles, journalists, protesters, and other individuals regarding the "draconian" curfews throughout Southern California. The ACLU says the curfews violate the First Amendment and "blanket restrictions on movement outside working hours violate the Constitution’s protection of freedom of movement."

“The City and County of Los Angeles are attempting to use these curfews to suppress Black Lives Matter-LA’s right to protest," Melina Abdullah, a co-founder of BLM-LA, said in a statement. “They are attempting to suppress our ability to fully mobilize and focus full attention on the true issue of concern in the protests — police violence against Black people.”

Given the curfews only came into place following protests, the timeline makes it clear that they are supposed to target protesters. However, the ACLU's statement notes that these curfews make it difficult for journalists to conduct their jobs too. This comes with increasing reports of police deliberately targeting journalists at protests.

Police have attacked journalists more than 130 times since May 28, according to the Nieman Lab. This includes instances of arrests captured on camera like that of Black CNN correspondent Omar Jimenez in Minneapolis. However, the U.S. Press Freedom Tracker found that journalists have also been targeted with assault, including physical attacks, tear gas, pepper spray, and rubber bullets. In Minneapolis, police blinded photojournalist Linda Tirado in one eye.

Cities like Chicago, Philadelphia, Minneapolis, and St. Paul have all imposed their own curfews as well. Some cities send out emergency alerts regarding curfews just shortly before they go into effect. On May 31, Philadelphia sent out its emergency alert for a 6 p.m. curfew at 5:49 p.m. — making it extremely difficult for workers and others already outside to get home in time.

Vice reported that these hastily-implemented curfews are wreaking havoc on cities, as police are essentially given total discretion in how to enforce the policy. This has led to documented cases of police violence. On Wednesday night in New York, police officers were filmed beating a man riding by on a bike with their batons shortly after curfew, eventually pulling him off the bicycle and into the street.

In Atlanta, six police were charged after the disturbingly violent arrests of Taniyah Pilgrim and Messiah Young were captured on live television. The video shows police smashed their car windows, tased Young and Pilgrim, and slashed their car tires — all because they were in violation of a curfew that residents received little warning about. The city's poor planning left people who were already enjoying their Saturday night scrambling to get home and opened them up to further violence from police.

Curfews cannot be used to stifle protests altogether. And given that protesters are rallying against police brutality, it makes little sense for cities to implement curfews that allow police to further escalate aggression. If the ACLU is successful in its lawsuit, that may change whether cities in Southern California implement curfews like this again — and hopefully, whether other metro areas nationwide do the same.

Los Angeles Mayor Eric Garcetti (D) announced Thursday that he'd lift the curfew in his city. “These unconstitutional curfews have suppressed a huge amount of important political protest activity and disrupted the lives of over 10 million people. The curfews must end now," said Ahilan Arulanantham, senior counsel of the ACLU of Southern California.