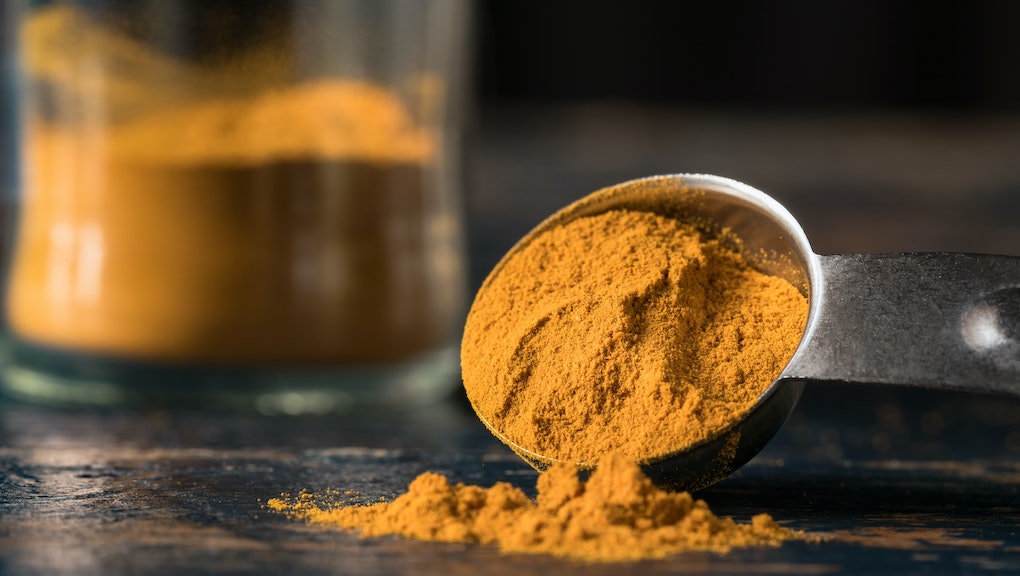 The benefits of turmeric if you're actually using it right

Turmeric has continued to reign over the past decade as the golden child of the root world. Wellness influencers tout the benefits of turmeric capsules, CBD oil, and face masks while coffee shops boast their golden milk lattes. My Ayurvedist and my herbalist have both recommended it for various conditions, and the internet promised me that turmeric will cure everything from depression to cancer.

But you know what they say about magical cures that sound too good to be true, right? Clinical trials or go home. I asked doctors and academics to help me get educated on any actually proven benefits of turmeric.

“You're absolutely correct to question the benefit of turmeric alone,” Amy Baxter, an Atlanta-based physician and clinical associate professor at Georgia Regents University tells me. It’s not the turmeric, exactly, she says, that has the magical curative powers all the influencers are talking about — it’s what’s inside. The active agent in turmeric, or the naturally occurring chemical that creates the amazing results, is called curcumin. Curcumin isn’t found only in turmeric; turmeric is part of the ginger family, and ginger and several other of its relatives also contain curcumin.

You have probably heard that Indian grandmothers have been putting turmeric in everything for centuries; it also makes up a generous part of the ratio of many curries and other culinary staples across Asia. That’s because turmeric does have a relatively decent amount of curcumin (most is between 2% and 5% curcumin), which is most saliently known to fight inflammation. The spice also has the bonus of being very delicious, inexpensive, and hardy. It grows easily throughout India (and now many other tropical places now, including my backyard).

Much to my delight, the Indian grandmas are spot-on. Curcumin has more science to it than a lot of other BS supplements that the wellness industrial complex pushes. “The literature on curcumin is clear — it provides anti-inflammatory benefits for everything from gum surgery to osteoarthritis,” Baxter says.

Inflammation plays a major role in many chronic diseases, such as heart disease, cancer, and arthritis, to name a few. “Curcumin in turmeric is a bioactive substance that can fight inflammation at a molecular level,” says Shideh Chinichian, a California-based primary care physician. “Turmeric also increases the antioxidant capacity of our body. Oxidative damage is one of the mechanisms behind aging and many diseases. It can neutralize free radicals and stimulate our body's own antioxidant defenses,” she says.

Free radicals are the byproducts of any chemical processes. These can be the result of positive, negative, or neutral chemical changes in the body. The oxidative damage Chinichian is referring to occurs when free radicals cause oxygen atoms within the human body to split into atoms with unpaired electrons, according to Medical News Today. These electrons then scavenge the body to find other electrons to pair with and this scavenging, or free radical behavior, causes damage to the protein and DNA cells. What Chinichian is getting at is that curcumin might be able to slow or stop this process.

Chinichian actually has a long list of the potential uses. Researchers are investigating whether curcumin may slow cancer cell growth (which is not the same thing as curing cancer, of course, but could still be promising) and it has been proven to help with depression, memory, and preventing Alzheimer’s.

Here’s the catch: You need to consume a lot of turmeric to actually reap the benefits. It’s been ubiquitous in Indian cuisine, but the way many of us in the West consume it — in golden milk lattes once in a while, for example, isn’t going to do much. Many doctors say that it’s probably better to rely on getting curcumin from supplements. “Most of the studies on curcumin use turmeric extracts with mostly curcumin content usually in dosages exceeding 1 gram per day,” says Chinichian. “It is difficult to reach these levels by just adding the turmeric spice to your foods. Thus, for full effects, generally supplements are recommended which contain high doses of curcumin.”

Also, be careful of all the cheap turmeric supplements out there. Baxter adds that doing your research on turmeric or curcumin is important. “Curcumin isn't very bioavailable unless it's in nanoparticles.” That means that even though a supplement may have a lot of curcumin in it, the body may not be able absorb, and therefore utilize, all of it. Researchers are currently working on ways to make curcumin more bioavailable. Some turmeric supplements have also been found to contain a lot of lead, which, as we know from the Flint, Michigan water crisis, is no bueno for the body. Look for supplements with rigorous third-party testing.

“Furthermore, benefits of curcumin are best achieved when it is combined with agents such as piperine — found in black pepper — which significantly increases its bioavailability and absorption,” says Chinichian. “Curcumin is also fat soluble, so it is advisable to take it with a fatty meal.” So, if you’re going to try a curcumin supplement, try one that is combined with black pepper and don’t take it on an empty stomach. Or, you could do what I’m doing and just put it in everything all the time.

Experts recommend talking to a doctor before adding giant amounts of turmeric into your diet. It’s generally safe, but can have side effects, like mild fever and kidney stones, when taken in high doses. Also, be patient. “It may take weeks and months to notice the benefits of including turmeric in your diet,” says Laura Krebs-Holm, an Austin-based nutritionist and medical advisor at eMediHealth, a site where medical professionals review popular products. In other words, it’s going to take a whole lot of golden milk lattes before you start seeing any results from turmeric.

This article was originally published on March 10, 2020

More like this
Castor oil for hair growth: Does it actually work?
By Melissa Pandika
If we get vegan bacon right, we can save humanity
By Tracey Anne Duncan
Should I wear sunscreen indoors?
By Caroline Shannon-Karasik
Stay up to date