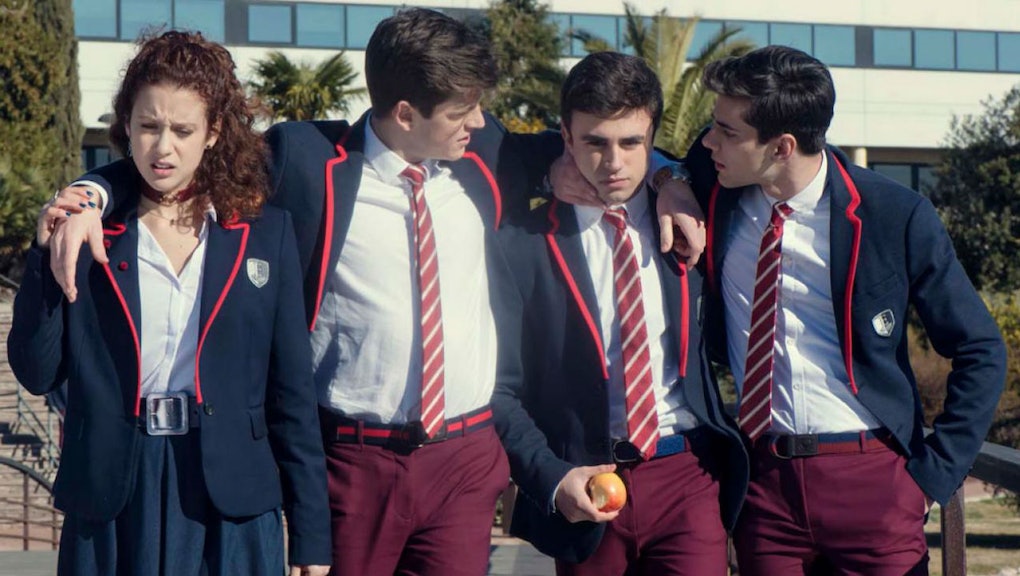 The best foreign shows on Netflix

As new streaming services continue to emerge, so do our options for viewing. Increasingly, Netflix has bankrolled excellent television shows from around the world. Prestige television, after all, comes in every language. It’s exciting to have options that go beyond the imaginations of American creators, but it also means that sitting down to choose what you’re going to watch that much more difficult. That's why we made this primer on the best foreign shows on Netflix.

Our curation includes high stake teen mysteries, gritty dramas, witty comedy, and everything in between. With hundreds of options on the platform, these certainly aren't the only shows that merit our time, but a roadmap to discovering what creators and concepts you'll want to keep an eye on as our viewing options, finally, expand beyond the U.S.

In the 1990s, teenagers in Derry, Ireland, had a lot to worry about beyond the ins and outs of adolescent angst — there was a whole sectarian conflict to be concerned with. The teens on Derry Girls, angsty youths in a time of national unrest, are familiar in many ways, excet tropes like lying to your parents often involve the IRA or Catholic priests. Both seasons only have eight twenty-minute episodes, so it’s a quick watch, and a guaranteed laugh.

Club de Cuervos is a bit like Friday Night Lights and Arrested Development and a whole lot of hedonistic fun. When a beloved owner of a professional Mexican soccer club dies, his two children and his much younger wife enter into a battle for the ownership of the team. In the course of the battle, they nearly destroy the team, the town, and their own lives. All four seasons are available to stream now.

In The Hookup Plan, Elsa is living the most boring version possible life of being single in her 20s in Paris, so her two best friends (who are hitting the next stages of adulthood) decide to host an intervention of sorts, to get Elsa past a crappy former boyfriend and back out into the world. Their method of doing so is a bit unconventional: They hire a male escort to take Elsa on a few dates. Except in true Rom-com nature, they fall in love. Over the course of the first season, the three friends deal with all the unexpected trip-ups of growing up after you’re already grown. It’s hilarious, it’s set in Paris, and season two is set to release this Friday, October 11.

Set across four countries in Europe, this crime drama exists entirely inside the interrogation room. It’s a bit ambitious, and each episode executes the concept to varying degrees of success. But the four-country series is a great primer on international crime procedurals, and carries enough mystery to keep you hooked.

In 2012, a horrific crime captured headlines in India and around the world — a violent gang rape that happened at random and in public. It was brought a reckoning in conversations about violence against women and sexual assault. This show follows Varthika Chaturvedi, the investigating officer, as she hunts for the men responsible. It’s dark, captivating, and powerful, and Shefali Shah gives a riveting performance as Chaturvedi.

This show is as lavish as it is mysterious. Police officer Sartaj Singh navigates the corrupt underworld of crime in Mumbai after receiving an anonymous tip that sets off a harrowing chain of events. The show is based on Vikram Chandra's 2006 novel of the same name. Season two released in August of 2019. If you’re a fan of prestige TV about the shadiest characters, this is the show for you.

If you liked the darkness of Luther, this is your next stop. A string of copycat killings in France forces one police officer to reunite with his mother to solve the crimes. Of course, his mother is the original serial killer. In the “race against the clock” format, the stakes are high and the mind games are plenty. With only six episodes, it’s perfect for a rainy weekend spent indoors.

A quick google search will reveal that this show is executive produced by Drake, but that might be the least interesting element of the show. Set in East London, the competition between rival gangs, a surplus of drugs, and the constant tension of making the right choices to stay alive and stay on top will have you binging every single episode of this show. And maybe thinking about investing in a proper tracksuit too.

This show is like Riverdale, except instead of being set in some small American town, it’s set in suburbs of Spain, and there’s way more sex and way more drugs. There might be a bit less murder but that doesn’t mean Elite won’t keep you gripped to the edge of your seat, screaming at your screen as you watch adults dressed as teens make one stupid decision after another. Filled with class tension and private school uniforms, this show is a perfect dramatic indulgence. Season two just premiered, and with it, even there is even more deception, sex, and crime.

When Detective Helena Poveda leaves Bogota to investigate four femicides in the Colombian Jungle, what she discovers far surpasses the constraints of the known world. Exploring the supernatural and shot in the lush and largely untouched forests in Colombia, Green Frontier is likely to be unlike any other show you’ve ever seen before. Haunting, beautiful, and with one foot firmly planted in the metaphysical, it’s a show well worth your time.

Set in depression-era Berlin, Babylon Berlin is sexy, filled to the brim with period piece outfitting and set pieces, and follows the torrid and crime-ridden world of Germany’s film scene. Inspector Gereon Rath, still reeling from his service in World War I, is tasked with investigating the violent death of an actress in the years leading up to World War II. It’s one part political drama, one part crime procedural, three parts debaucherous drama. It’s the biggest show in Germany and is gaining a faithful audience abroad.

This show has earned a loyal and endeared audience for a reason: It is peak reality tv. Often called “a show about nothing” it lacks the normal trappings we’re used to. There’s no competition or elimination, or final prize. Everyone’s not trapped in the house a la Jersey Shore, forbidden from accessing the outside world. Rather, three boys and three girls are placed in a house together and they are followed as they go about their everyday lives, and maybe fall in love in the interim. This show is like the Cinema Verite of reality TV, and provides the perfect escape from the overproduced and hyperactive reality programming you may be used to.