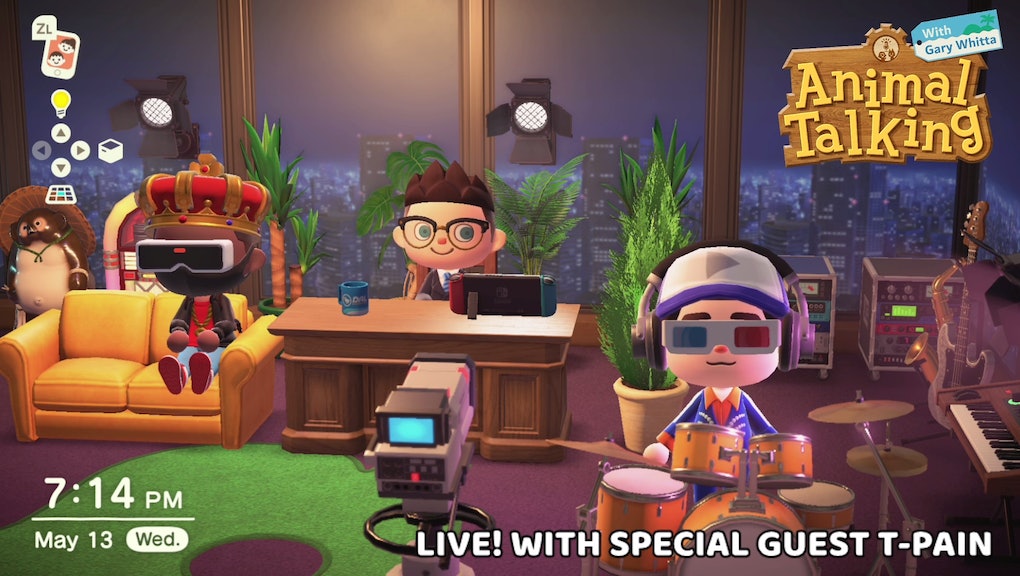 The best show in late-night is on 'Animal Crossing'

The pandemic has forced a lot of people to rethink how they do their jobs. From restaurants pivoting to delivery-only and white-collar workers switching to home offices, many are either changing up their workplaces or finding new hobbies that keep them busy during quarantine.

Not all changes are a success, though. Late-night talk shows, for instance, have tried to recreate the magic of their studios at home to mixed results. There's something kinda claustrophobic about staring at two people's faces as they gaze into a webcam. I get a huge 'you're way too close to me' vibe whenever I watch them.

One show that has bucked that trend, however, is Animal Talking, a new late-night show airing inside the Animal Crossing universe. I'll admit that a late-night show hosted through New Horizons sounded like one of those cheesy ideas that make for entertaining YouTube clips but not a full show, but when I tuned in and saw T-Pain as a featured guest, my mind was quickly changed.

Gary Whitta, a writer for Rogue One and The Book of Eli, has been hosting the show on his Twitch channel, livestreaming episodes with special guests and music and everything else more 'traditional' late-night hosts have. Within almost a month of streaming, he's had guests like filmmaker Emily Carmichael, stand-up comedian Samantha Ruddy, and author Chuck Wendig on his show. And, shockingly, it actually works. Instead of pulling the 'late night at home' format the TV guys have done (with so-so levels of success, in my humble opinion), Whitta created a setup in his New Horizons home that so incredibly and accurately portrays a late-night show that I forgot it was actually just a well-decorated house in Animal Crossing.

Still, I didn't check it out until Wednesday, when I heard T-Pain was gonna be a guest on the show.

I was immediately hooked. T-Pain brought a sense of unbridled joy and enthusiasm to the set that was made all the more powerful because of the attention Whitta put into his virtual studio design. The chaotic energy of a video game, even one as chill as Animal Crossing, was fully embraced by both the host and guest. Everyone was as natural about it as possible, breaking the ice by casually talking about what their avatars were wearing — T-Pain, always the positive role model, made his avatar wear a face mask.

At one point during the show, Whitta gifted T-Pain a crown worth a million bells. The absolutely jubilant screams from T-Pain were hilarious, uplifting, and infectious as hell.

Afterward, Whitta and his guest talked about how they got into video games, and what they've enjoyed playing lately. They bonded over how games have helped them get through the pandemic with their families and kept them connected with friends.

According to The Verge, Animal Talking has been a lot of work for Whitta and his team, which consists of his wife, friends, and a few other volunteers. They had to hurry to get the expansions for the house, make money for items, find the right decor, and learn how to maneuver the camera to capture the best angles.

But it all paid off, resulting in a fun talk show that rivals anything the major networks are doing at the moment.

Plus, it's a format that has T-Pain's approval.

"I had a long, long, long conversation with my team about two days ago," he told Whitta during the show. "And I was like — you know, we have meetings periodically about what press I wanna do and what interviews and stuff like that — and I'm like, man, can we do something that I actually like? [...] When they brought me your thing, I'm like, guys, I don't want anything for this. I'm not here to promote anything. I actually wanna do this. I could do this for hours on end."

The visit to Whitta's island also came with its benefits. "When I came to your island this time, I got another thousand Nook Miles for this," T-Pain said. "And a million-dollar crown! It's amazing!"

Checking out T-Pain on Animal Talking has convinced me that it's not some silly YouTube skit, it's a show with an actual talk show feel to it. I'm really interested in seeing how the video game format will work for the next guests — set to be fellow Animal Crossing players Elijah Wood, Danny Trejo, and Greg Grunberg.

To catch the livestream of the next Animal Talking, hit up Witta's Twitch channel on Thursday, 7 PM Pacific. You can also watch old episodes in the 'videos' section of his Twitch account, or on his YouTube channel.

More like this
What 'Super Mario 64' selling for $1.56 million says about nerd culture in 2021
By Keith Nelson Jr.
For the record, this lake in Patagonia is not supposed to be neon pink
By AJ Dellinger
Amid daily reports of catastrophe, Americans are finally starting to realize climate change is bad
By AJ Dellinger
Stay up to date